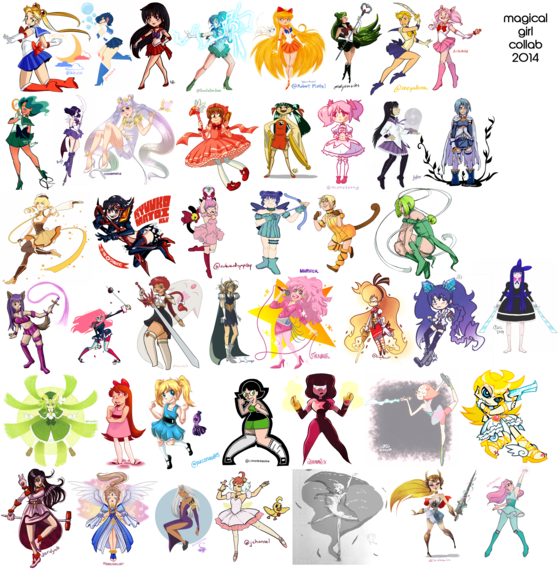 The magical girl trope -- that is, stories involving young girls with magical powers -- has been around since the 1960s. Though most commonly found fluttering around Japanese anime (cartoons) and manga (comics) series, the magical girl archetype has most certainly spread to the United States and beyond (think Powerpuff Girls, Buffy the Vampire Slayer, etc.) and is beloved by many.

As an ode to magical girl characters the world round, Toronto-based animator and comic artist MK Harris (@hospitalvespers on Twitter) organized an artistic collaboration (aka collab) encouraging fellow artists to choose a magical girl character, illustrate the character in their own style, and submit their illustration to MK Harris, who would assemble everyone's contribution into a big, colorful collection. 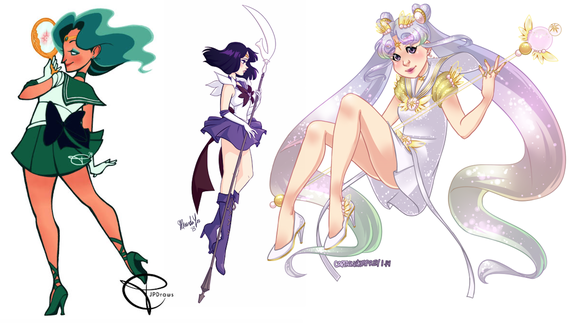 Swarms of artists scrambled to sign up for characters, and over a series of weeks, submitted their illustrations to MK Harris via Twitter using the hashtag #MagicalGirlCollab. The final poster the project yielded offers a beautiful survey not just of magical girl characters over time, but of online artists' different styles.

I caught up with MK Harris to get more background on this fun project. As this Magical Girl collab was inspired by several collabs that came before, one can hope that MK's venture will inspire a whole new slew of artistic projects in turn. 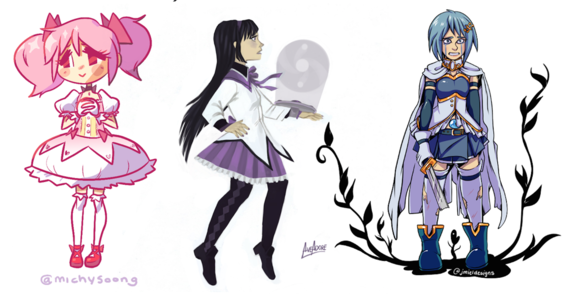 Simone Collins (SC): What, if any, art collabs had you been involved with before?

SC: Why did you choose magical girls as a subject?

MKH: I chose magical girls because a friend of mine and I wanted to create a collab. It started around Christmas, and a lot of collabs were kicking off then. I wanted something that would offer a lot of variation, and enough selection that people would be able to suggest new characters if someone they wanted wasn't on the list. Because of that we got an interesting mix of classic (Sailor Moon, Magic Knight Rayearth), new (Mahou Shoujo Madoka Magica, Daybreak Illusion), and even Western versions of magical girls (Powerpuff Girls, Jem and the Holograms, She-Ra).

MKH: I drew Sakura Kinomoto from Cardcaptor Sakura! I watched Cardcaptors on TV here growing up, and then went on to watch the original show and read the manga, so it's always been a part of my life. Sakura is my favourite magical girl, by far! I just like drawing all her floofy dress outfits.

SC: Why do you think that artist collabs have grown so popular over the past couple of months?

MKH: I think it's popular because it's a fun little thing to work on while you do other stuff, and also due to people wanting to contribute to something they like. I mentioned the collabs I've been in, and they're all things I'm interested in, and I wanted to contribute my interpretation of, say, a Piranha Plant, or my favourite Villager from the new Animal Crossing game. A lot of the time it's a mad rush to get your favourite character on a list. It's also a good way to get noticed, because finished pieces are often retweeted and reblogged, and it's really just fun to see the final picture and be able to say 'I was part of this!'

SC: Could you tell me a bit more about your background as an artist?

MKH: I'm an animator in my fourth and final year of Animation at Sheridan College.