For all the changes on Governors Island -- the public access, bike paths, music festivals and picnic spots -- it is the island's past that inspires a group of artists who work in a light-filled former Army warehouse that sits just to the right of the ferry slip when arriving from Manhattan.

Its history and dramatic placement in New York Harbor make the island a unique locale for the artist-in-residence program, run by the Lower Manhattan Cultural Council.

Jeanne Verdoux creates whimsical miniature characters out of items found on the island and photographs them with dramatic backgrounds from the surroundings. Her first character, "Mr. Bones, the Indian Chief," was modeled after the Native Americans who once used the island as a fishing camp. 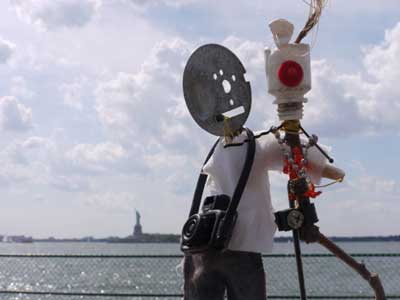 Kenseth Armstead finds the island a perfect setting for his project, "Spook," in which he uses drawings and video to tell the story of James Armistead Lafayette, an African-American double agent during the Revolutionary War.

And Tamar Latzman incorporated the 19th-century feel of the island's old brick buildings (they were part of an Army base, then U.S. Coast Guard base) into her video project, "Mrs. Tadd Visits." In it, she reveals the identity of a woman who was photographed by the 19th-century photographer Eadweard Muybridge and imagines what their relationship was like.

Every year, two sets of 18 artists are awarded studio space in what is called Building 110 for five months. The current residents started in March and end their residency later this month. An open house, when the public can tour the space and see their work, will be held on Saturday, July 14, and Sunday, July 15.

The artists travel to their studios -- large, airy spaces, some with stupendous views of Lower Manhattan -- by ferry and must abide by its schedule. The last ferry out on weekdays is 6 p.m. and 7 p.m. on summer weekends, when the island is open to the public.

And while this structure may run contrary to free-floating artistic spirits, "the amazingness of being on Governors Island trumps the challenges," said Melissa Levin, director of artistic residencies for the LMCC.

She said the program, which began in March 2010, has provided a welcome "retreat-like experience in the city" to dozens of artists. Artists must apply for the space and are chosen by a panel of arts professionals, Levin said.

The juxtaposition of frenetic city life and island serenity is particularly appealing to some participants.

"I feel like I'm completely losing New York City when I come here and I actually am in another time and space," Armstead said.

The views, too, are inspiring. Dominique Paul, who makes wearable structures out of clear plastic bottles, egg crates and small lights, was reminded of Franz Kafta's The Metamorphosis after looking at her view of the skyline every day.

"At first you look at it like a tourist and then you realize there are different architectures, people work in there and in some buildings I can imagine the life of the people," she said. These observations inspired a video project in which she morphs from an office worker in a suit made out of egg crates to a beetle-like bug with light-filled spiky water bottles covering her back. 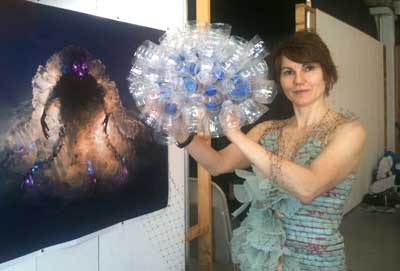 On weekdays, the island still has a ghost town feel, some artists said.

Verdoux, who spent the desolate weeks of early spring wandering the island collecting bones, buttons, feathers and shells, said her work with the miniature figures created a "mini-world" inside the "mini-world" that is Governors Island.

"People lived here until 1996 and then everybody left but there was a real life to the island. There was a theater, a YMCA, a pool, four churches and a synagogue. Anything you can imagine in society is here, completely intact and there's no one here," she said. "It's a world that's been abandoned."

That all changes on summer weekends when the island is open to hordes of New Yorkers who come to bike, picnic and enjoy the views. They also, apparently, like to see art.

Levin said that a gallery attached to the studio space has gotten up to 915 visitors on weekends. And during an open studio event on the first weekend of the summer season, some 2,400 people toured the LMCC's space.

Armstead said he enjoys interacting with visitors to the island because it takes him outside his usual circle of gallery and museum shows. "We had 2,000 people here on the first day and there were people who were just regular Joes who wouldn't naturally go to an art museum," he said. "For me, it is the great part of this."