"Everything is art," Ai Weiwei once declared. "Everything is politics." The sentiment is one upheld by many individuals who view the line between art and activism to be a thin, blurry boundary worth crossing.

The latest group to illuminate the ongoing connection between creative and political expression is Artists Support Ukraine, an initiative that seeks to bring attention to the Euromaidan protests in Kiev, through art. Organized by the Kadygrob & Taylor Platform for Contemporary Art, the collective engages painters, photographers, video artists, graphic designers, street artists and more who are willing to stand up in support of the pro-democracy forces that helped oust former President Viktor Yanukovych in February -- forces that are currently standing in opposition to advances from the Russian government. 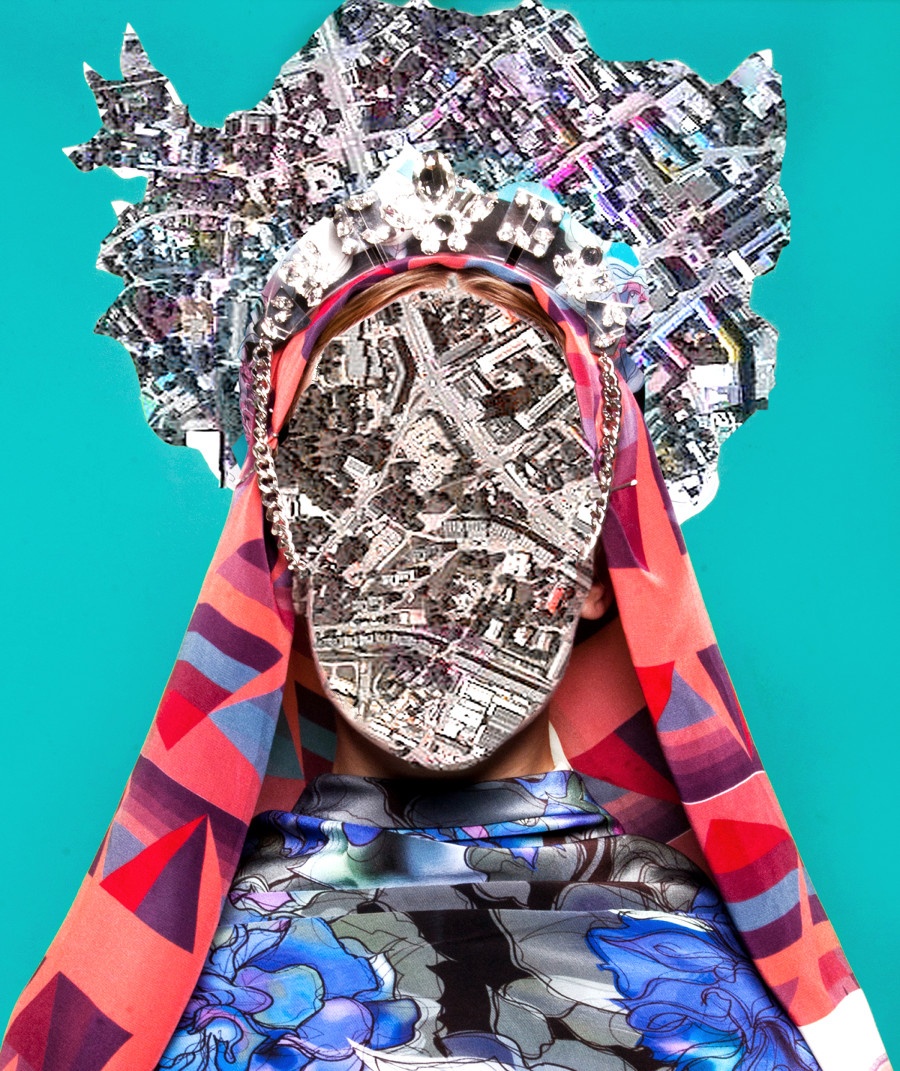 Layla Sailor: "Here is my work in support of Ukraine titled 'Motherland.'"

"After a series of pro-democratic protests, the country found itself facing aggression from Russia, including abrupt occupation of Crimean peninsula, inadequate and biased ideological media-coverage, and straightforward violence," reads the group's mission statement. "We are engaging artists and cultural workers from all over the world to make a statement in order to support peace and freedom."

The group has collected together both artworks and statements of support, displayed on the Artists Support Ukraine website. American painter Fred Tomaselli, Egyptian-Lebanese media artist Lara Baladi and Russian street artist Tima Radya have participated in the initiative, amounting to a dazzling display of international solidarity. Some works -- like Tomaselli's -- address the tumultuous relationship between Ukraine and Russia with familiar imagery reminiscent of contemporary art activists like Pussy Riot. Others, such as UK-based photographer Layla Sailor and Polish sculptor Krzysztof Bednarski, reference the Ukrainian "Motherland" with decadent female figures and peaceful homages to the country's national flag. 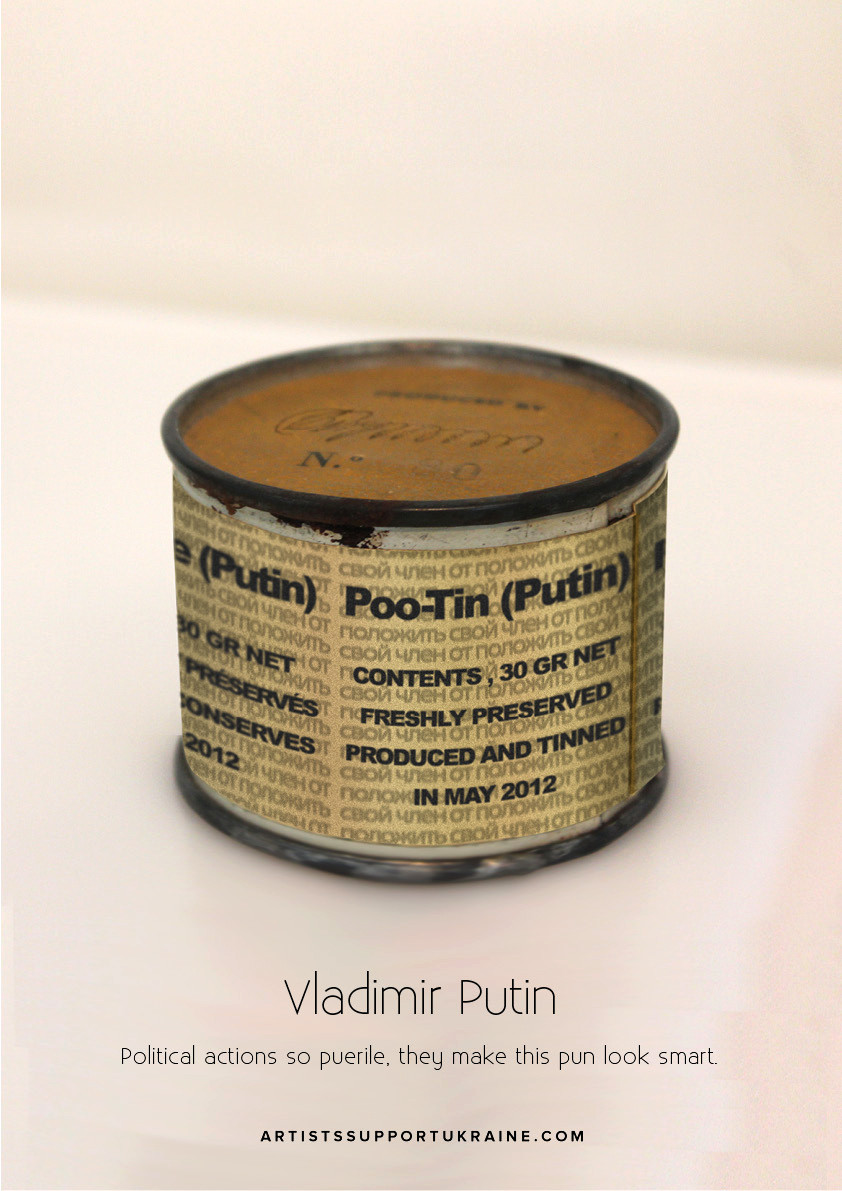 Eric Michael: "While reading coverage of the crisis, I came across a passage where one commentator quipped that Putin has a propensity for "waving his dick around" politically, which got me thinking about how juvenile his tendency to assert himself so aggressively actually seems from the outside, this set the tone for the work."

"The world would be a better place if Putin wasn't always trying to prove his 'manliness,'" Tomaselli wrote in a statement shown on the website. "I hope Ukraine can eventually achieve the ethical, open and equitable society it deserves. And I hope Putin gets his just desserts."

Volodymyr Kadygrob, one of the ASU founders, told The Art Newspaper that the website began after Russia's movement of troops into Ukraine and the "massive informational campaign" that justified the annexation of Crimea. “We wanted, on the one hand, to draw attention to military aggression awkwardly veiled by Russian propaganda," he added, "and, on the other, to show the attitude of the international art community towards Ukraine."

Last month, a number of famous Russian cultural figures signed a letter supporting the decisions of Putin, stating, “In the days when the fate of Crimea and our compatriots is being decided, Russian cultural figures cannot be indifferent observers with cold hearts... That is why we firmly declare our support of the position of the president of the Russian Federation on Ukraine and Crimea.”

Scroll through a preview of Artists Support Ukraine below. Those interested in supporting the ASU group are encouraged to share the organization's open letter, disseminate the artwork with the hashtag #supportukraine and submit more original work on the site here.

Fred Tomaselli: "The world would be a better place if Putin wasn't always trying to prove his 'manliness.' Of course, the USA had the same problem with Bush and look where that got him and us! I hope Ukraine can eventually achieve the ethical, open and equitable society it deserves. And I hope Putin gets his just desserts."
Krzysztof Bednarski: "I'm sending my work to support Ukraine: the title is 'Victory for Ukraine' and it comes from an old work of mine dated 1983, 'Victoria, victoria,' made during the state of war in Poland. This sculpture in that time became a well-known symbol of independent culture against the regime. This marble sculpture is actually exhibited permanently in the National Museum in Kraków."
Daniel Malone: "The work, called in English, 1990Now!, asked people to critically reconsider Donetsk and Ukraine's history as an open ended narrative with numerous potential paths and thus, still, futures to come. It did this using a (very Soviet) Sci-Fi convention of re-imagining past events, a 'what if?' scenario, and it celebrated this collective potential with the kind of industrial Rave party that was happening in disused factory buildings all over the world, circa 1990, the very moment Ukraine took it's first steps of independence."
Gabriel Benderski: "КРИМ/CRIMEA"
Victor Angelo: "Sending my painting entitled 'Freedom' for Ukraine and its citizens."
Griet Menschaert
Luchezar Boyadziev: "In this difficult moment my heart is with all friends and people of Ukraine (and of Russia) who hate war! Nothing is worth wasting human life, why don’t we ever learn?"
Lara Baladi: "I am pretty horrified at how the world is so bluntly barbarian although we are in the 21st century. We do not learn, we do not change, but we Trust and continue to Hope."
Tima Radya: "All the bullets which flew from Russian side to Ukrainian and vice versa, are slicing through the air & the upcoming years. There will be boys and girls who would grow up when we would be long gone, but these bullets will hit them in their hearts and brains. And they will shoot each other, using the same special bullets, slicing through the timeline, going upstream. There is no one to stop these bullets, for it is more complicated than to shoot one more time. So we are to think again, Vladimir, and think carefully. Because we are to love our Motherland." (03.03.14, Putin's palace in Yekaterinburg)
Fiona Pardington