Armory Arts week is over, leaving New York a bit of time to recover until, well, May rolls around and Frieze comes to town. While we relish these moments of solitude, it seems as good a time as ever to look at ahead at a new season of shows, exhibitions, and emerging art.

So, in the wake of our Armory Show enthusiasm, we've rounded up our favorite artists from last week's festivities, most of whom are planning big things this year. Whether the artist is relatively new to the scene or fairly established, they're touring the globe with solo projects and group shows worth checking out. From the Iraq-born painter Hayv Kahraman to the moving image master Brian Bress to the sculptural oddities of William J. O'Brien, behold: our guide to the artists you should watch out for this spring. 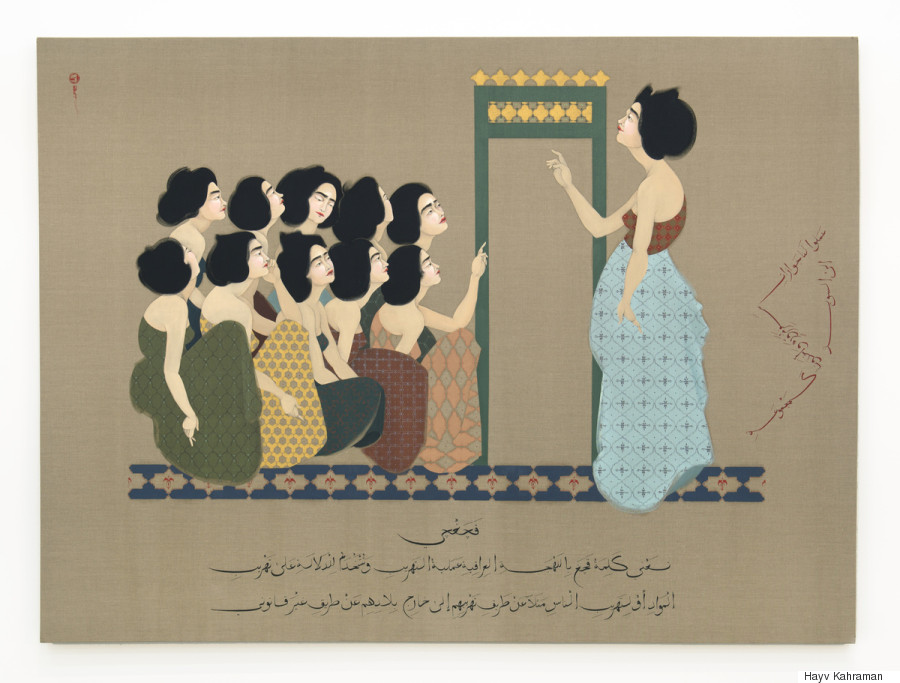 Hayv Kahraman. Caption reads: They made us fake passports and took us in a group to Sweden. Photo and caption courtesy of the artist and Jack Shainman Gallery, New York.

1. Hayv Kahraman The Baghdad-born artist explores her Middle Eastern ancestry in a project aptly titled "How Iraqi Are You?" In the series of paintings, Kahraman physically inserts her face into art history, creating figures that resemble Renaissance paintings, ukiyo-e imagery and Persian calligraphic manuscripts. Past projects have focused on the floor plans of domestic homes in Iraq, the intrinsic beauty of a dodecahedron, and women rendered as marionettes.

Her work is on view at the Kemper Museum of Art in Kansas City, Missouri this year, as well as Jack Shaiman Gallery in New York.

2. Brian Bress Brian Bress is a Los Angeles-based artist whose portraits, often moving images staged on flat-screen monitors, are like the contemporary lovechild of Monty Python, Nick Cave and claymation magic. A favorite of his on view during the Armory Show presented what appeared to be a cartoonish, buck-toothed man slowly erasing a chalkboard -- except that board was the fourth wall between the mop-headed stranger and the viewer.

You can check him out at the Utah Museum of Fine Arts in 2015, in an exhibition that will travel to the to Museum of Contemporary Art, Denver the next year. Bonus: he'll also be on view during the Palm Springs Art Museum group exhibition, "Personalities: Fantasy and Identity in Photography and New Media." 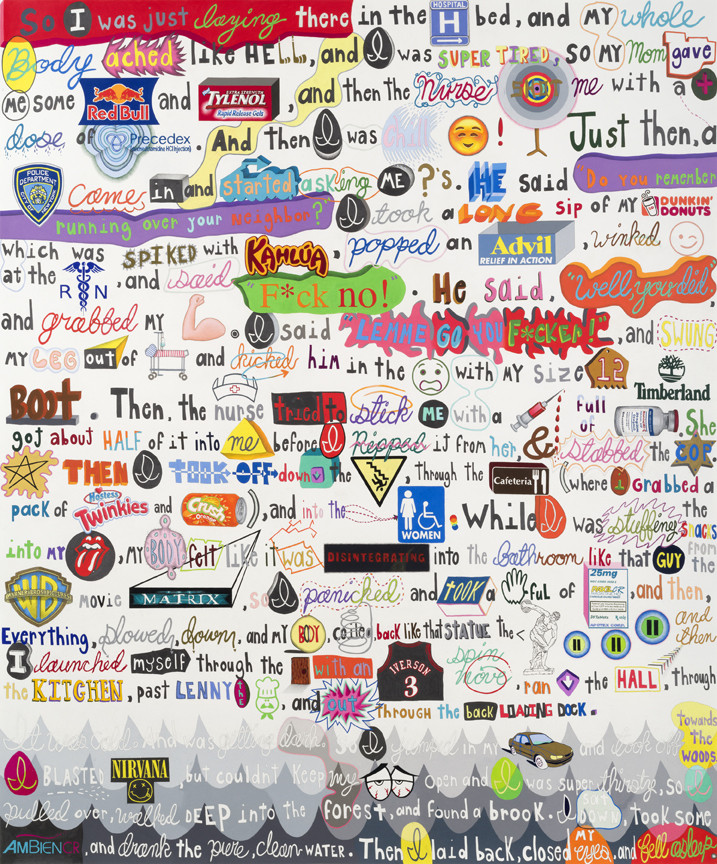 3. John O'Connor John Jerome O'Connor's works are multicolored streams of text, including a diptych called "Love Letters" in which the artist recalls a spam email he received from someone named Beyonce stationed next to a modified version of a letter Napoleon wrote his wife Josephine. Above you can see one of a series of 26 canvases meant to document "the narrative account of an individual's passage through time," courtesy of Pierogi Gallery in Brooklyn.

O'Connor is due for a show at the Arts and Leisure Gallery in New York. Stay tuned for details. 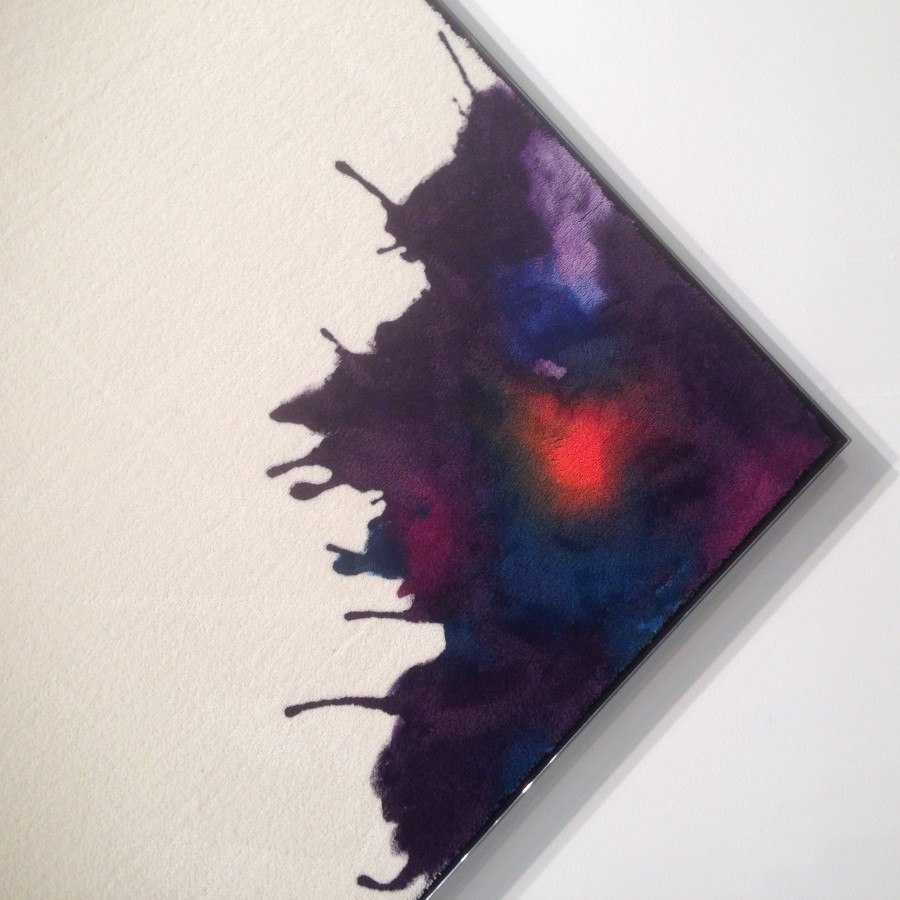 4. Andisheh Avini Iranian-American artist Andisheh Avini is known for his silk-screened visions and Persian carpet-inspired fiber works that resemble Rorschach inkblots that eerily bleed, bunch and creep. He has a thing for skulls as well, but we are particularly fascinated with his ink and marquetry on wood -- pieces that mimic portals to another world, portals holding back masses that are attempting to burst forth with each stroke of color.

Avini was previously on view as part of the Marianne Boesky booth at the Armory Show. He'll be showing at that New York gallery in the fall of 2015. 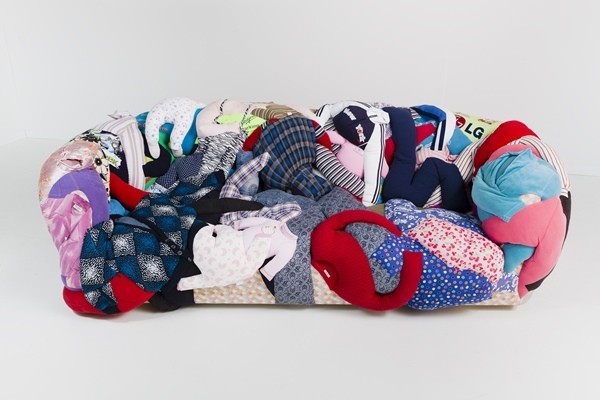 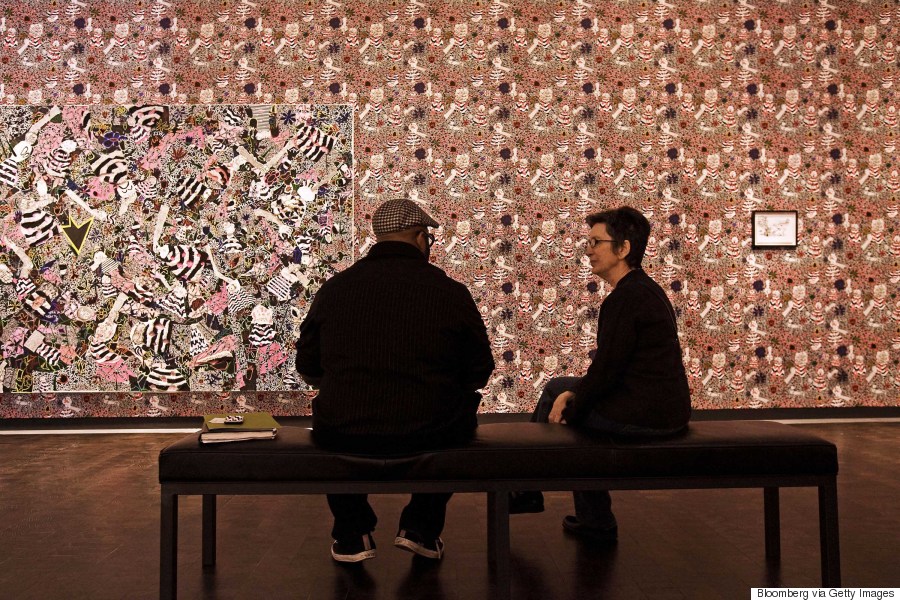 Artist Trenton Doyle Hancocktalks about his painting "Flower Bed II, a Prelude to Damnation," on display, with artist Kate Rosen during a preview for the Contemporary Jewish Museum in San Francisco, California, U.S., on Wednesday, June 4, 2008. (Photo by Chip Chipman/Bloomberg via Getty Images)

6. Trenton Doyle Hancock The Oklahoma-born, Texas-raised artist Trenton Doyle Hancock is taking over the Studio Museum in Harlem this year, showcasing "Skin and Bones, 20 Years of Drawing" from March 26 to June 28, 2015. The exhibition will put on view two decades worth of his drawings, which span from comic-ready portraits of monsters to sprawling landscapes presumably plucked straight from his own nightmares.

He's by no means a new artist, but his 2010 acrylic handmade paper piece, "He," caught our attention at the Armory Show and we couldn't be more excited to see his work once more in New York. 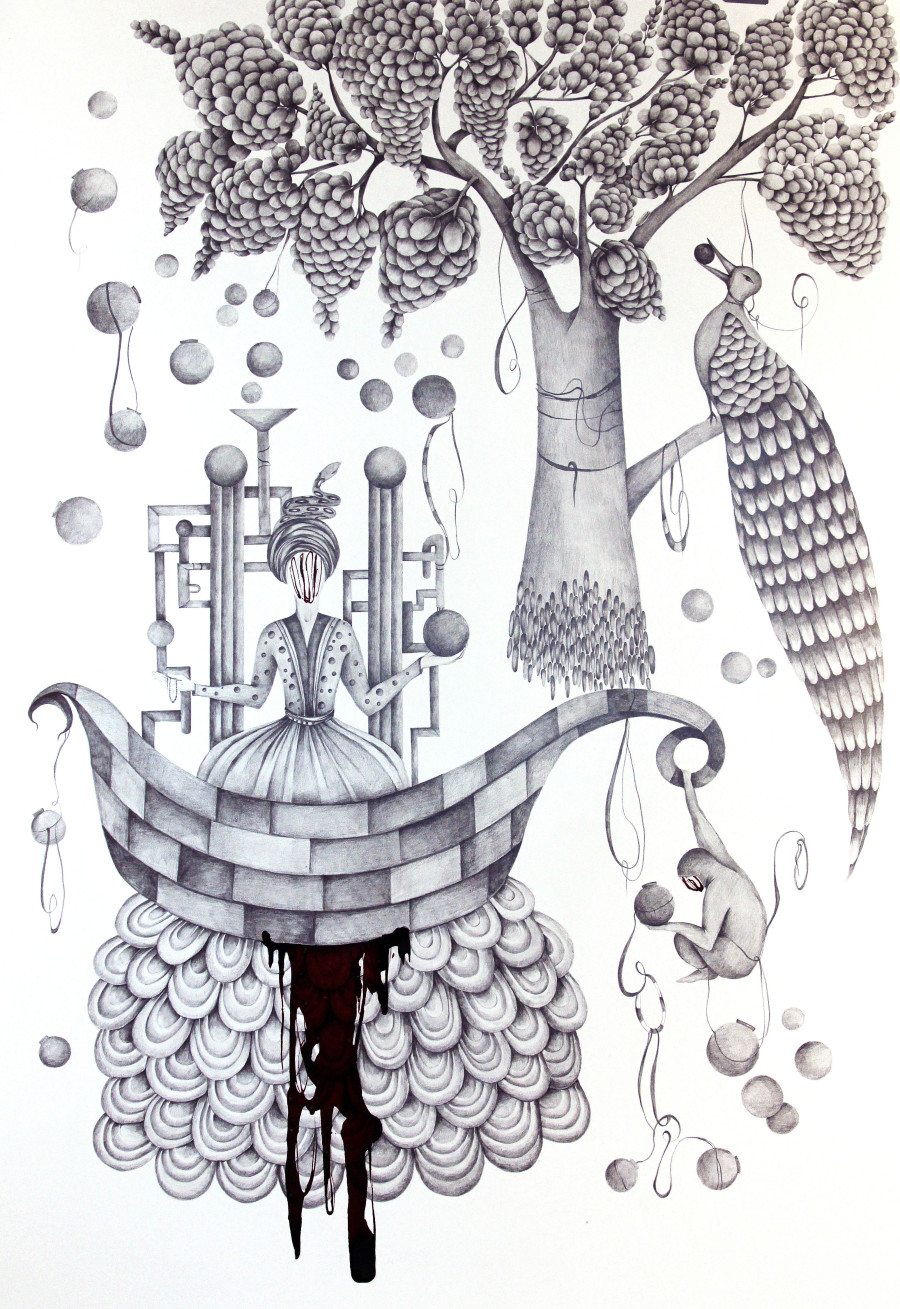 7. Shiva Ahmadi Born and raised in Tehran, Iran, Shiva Ahmadi creates fantastical worlds -- painted and drawn -- that reside somewhere between Hieronymus Bosch's fictional hell and a monochromatic fairy tale filled with peacocks and primates. In her untitled work shown above, a graphite drawing of a faceless man is made all the more poignant by what appears to be a pool of blood seeping out below him.

The Metropolitan Museum of Arts recently acquired two of Ahmadi's works. Beyond that, you'll have to follow her website for more updates.

8. William J. O'Brien Whether William J. O'Brien is working in felt, ink, coated steel, colored pencil or glazed ceramic, the artist has a consistent flair for saturated color and kid-friendly forms. His sculptures, also on view at the Marianne Boesky Gallery booth at the Armory Show, were a big hit, almost constantly the focal point of an Instagram by intrigued fair goers.

You can see more of O'Brien in a solo show at Susanne Hilberry Gallery in Michigan from March 21 to May 9, 2015. 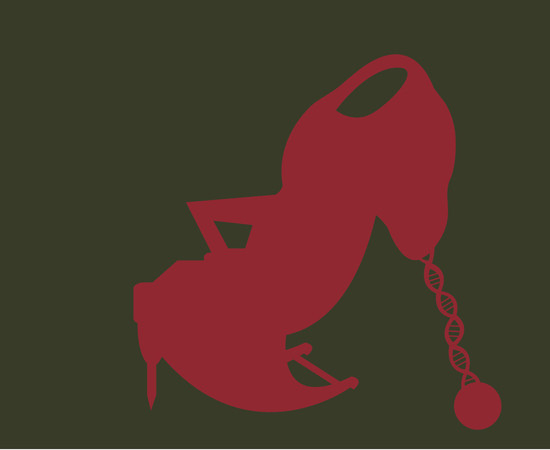 9. Mona Marzouk Born and based in Alexandria, Egypt, Mona Marzouk tends to work in sparse colors. Her massive paintings place a few minimalist images, often political in nature, at the center of their frames, surrounded by a cloud of a single-hued pigment. Her sculptures are large-scale, echoing her interest in architectural histories. "Through imaginative studies of objects such as flags and helmets," Gypsum Gallery adds, "Marzouk tackles politically loaded themes such as war, sports, nationhood, space technology and oil industry and how they habitually manifest themselves in our daily life."

During Armory week, two of her selected works, titled "Trayvon #5" and "Trayvon #3," reflected on the courtroom as a space for "unfolding narratives," just as it is meant to be a space for the "implementation of justice." 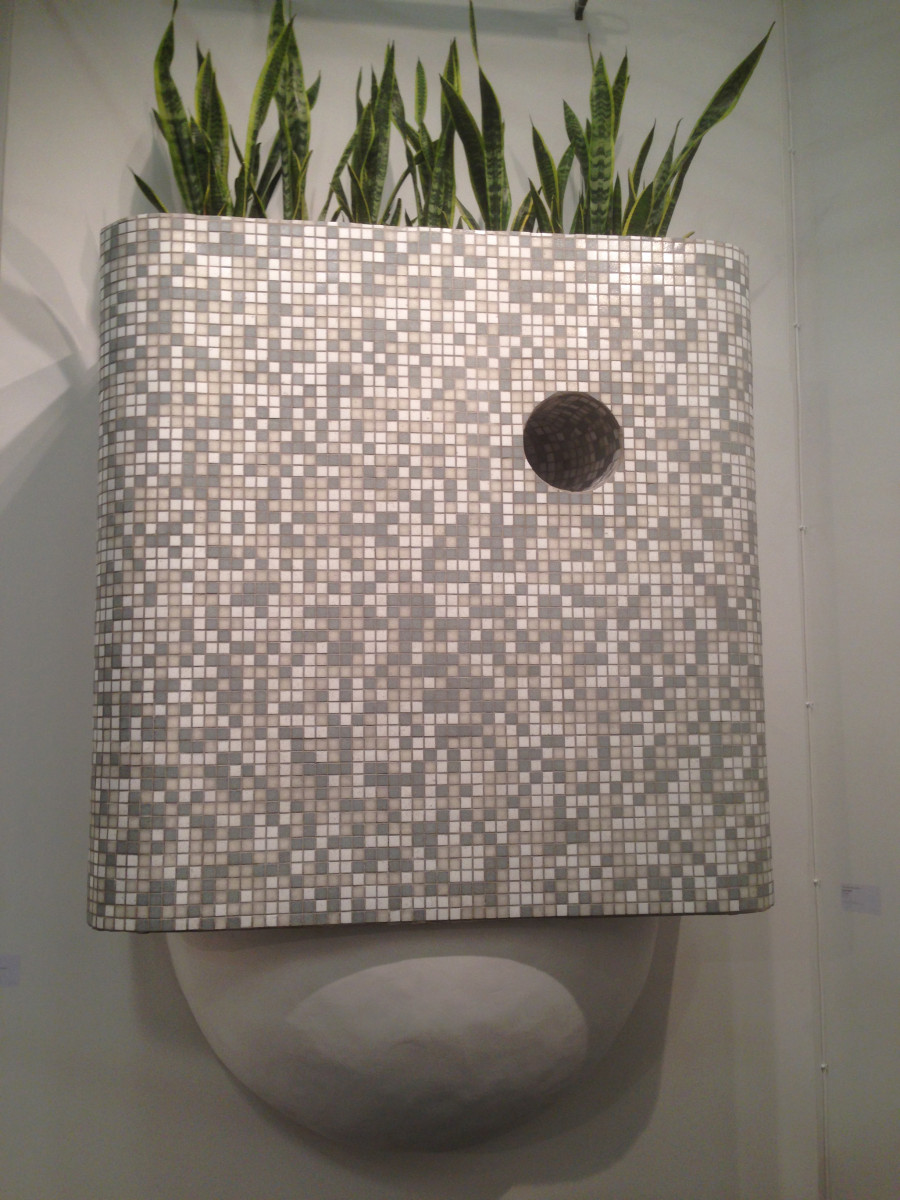 10. Rachael Champion New York-born artist Rachael Champion uses sculpture to investigate the relationship between humanity and nature, often in a way that results in site-specific, ecologically-mindful works that could be mistaken for an eccentric piece of interior design. A few of her favorite materials include found objects, steel, timber, wheat, barley, buckwheat grass, mosaic tiles, rigging hardware, and tarpaulin.

Her “Mountain Flattening Initiative” was on view this month during the Armory Show, and she'll be at Art Basel Hong Kong from March 15 to March 17, 2015 if you happen to be in the neighborhood. 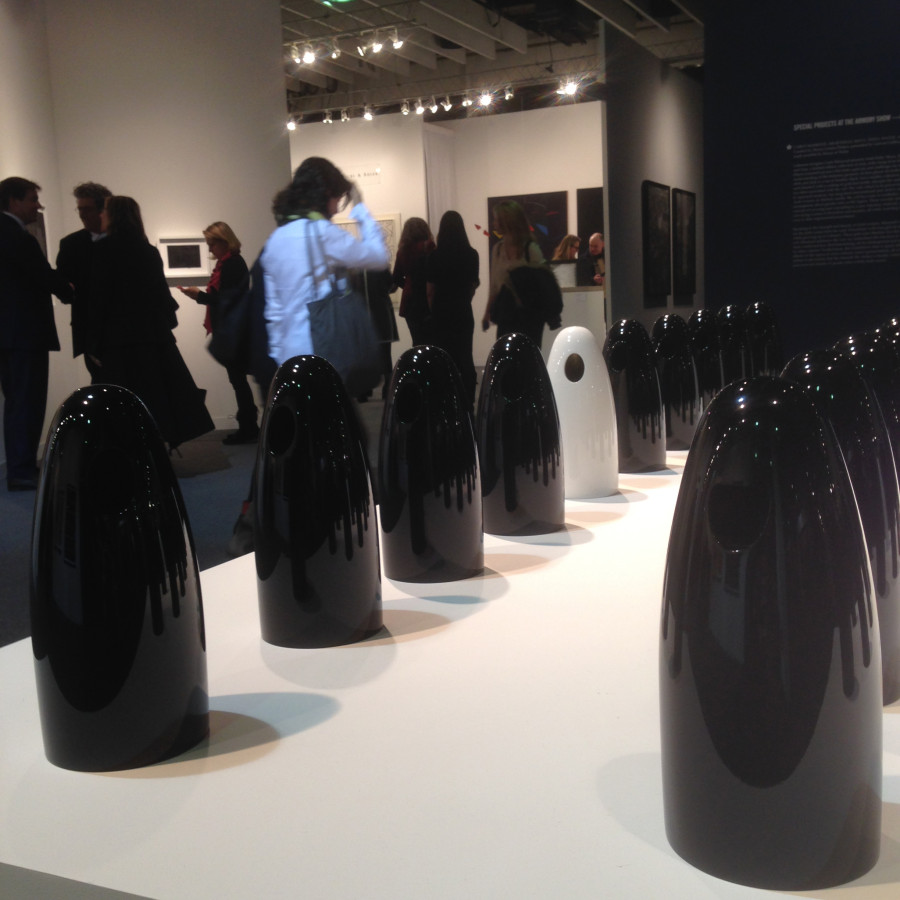 11. Carlo Massoud Lebanese designer Carlo Massoud showcased the first design project featured at the Armory Show, a work titled "Arab Dolls: Maya, Zeina, Racha and Yara." The piece consisted of 40 black and white lacquered forms lined up on a stark white platform, meant to symbolize the various veils worn by Arab Women. “People tell me that they look like bullets, but I wanted to show that women are getting more power in the Middle East,” Massoud told The Observer. "They look like an elegant female army rising in strength while gaining more rights.” 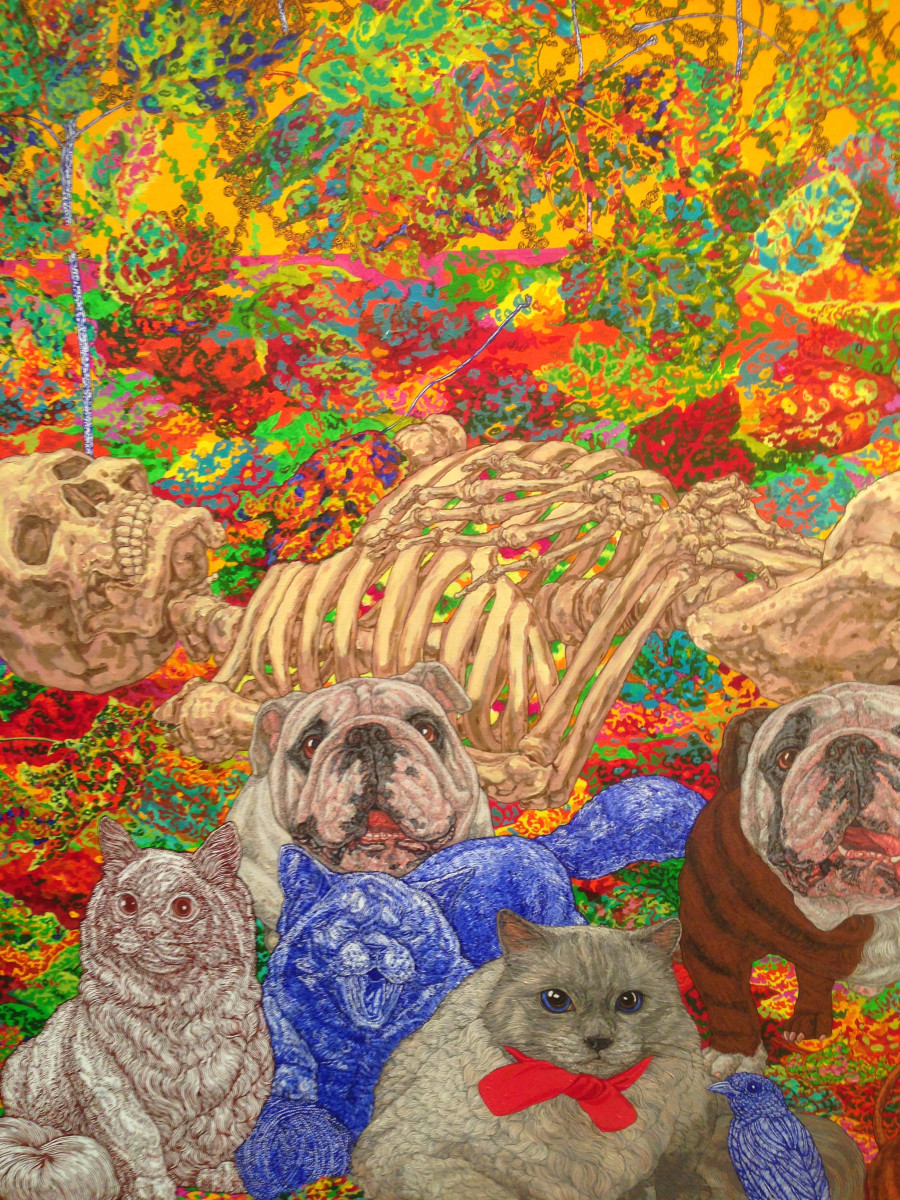 12. Katharine Kuharic A native of South Bend, Indiana, Katharine Kuharic makes incredibly intricate contemporary allegorical paintings populated not by Aesop's hares or Dr. Seuss's turtles, but instead with psychedelic skeletons and well dressed bulldogs. To drink in one her painted universes is to sit and stare, inch by inch, attempting to make sense of the neon chaos.

You can see her available work, at PPOW Gallery in New York, here. 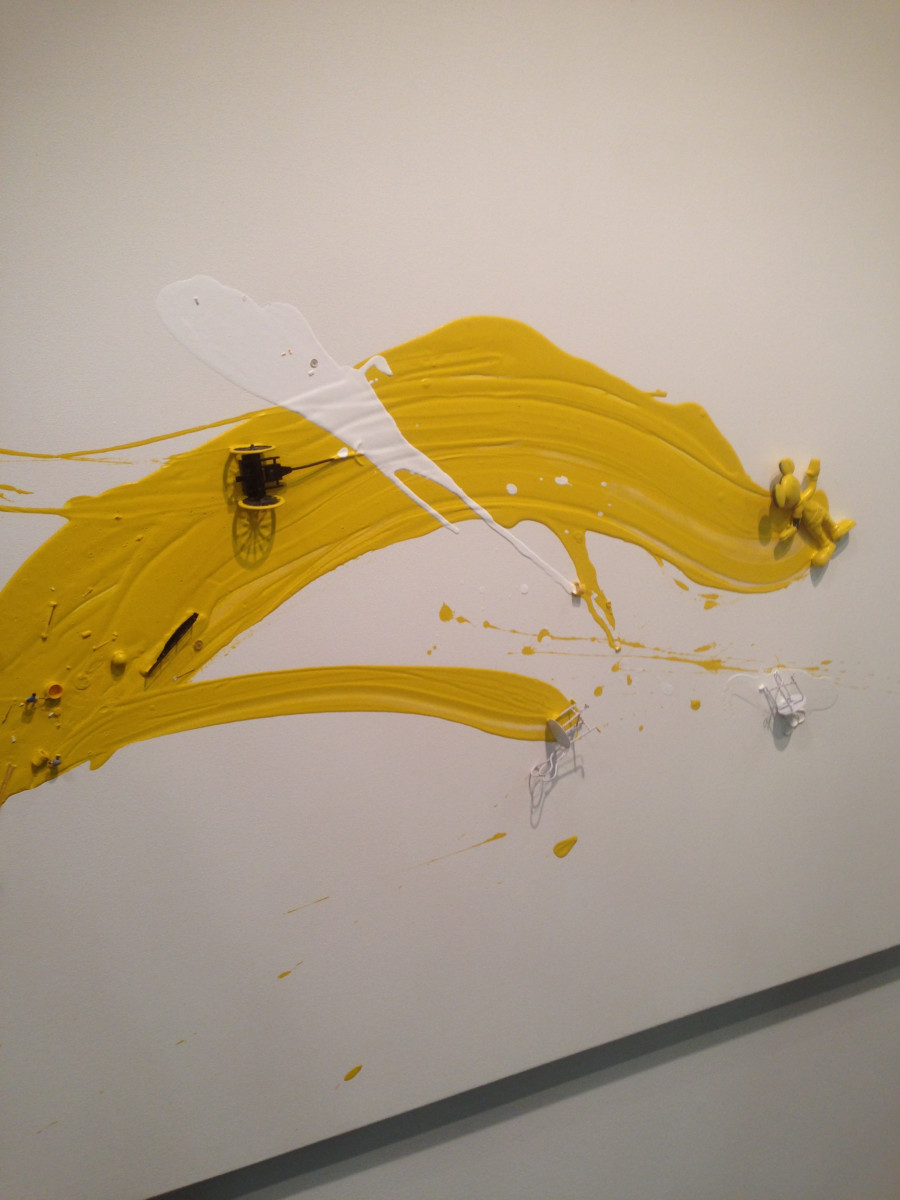 13. Liliana Porter Buenos Aires-born artist Liliana Porter has been working avidly in photography, printmaking, installation and video since the 1960s. “My work is… like watching a movie with the lights on," she once proclaimed.

Her 2013 assemblage-on-canvas creation, "Untitled with Fallen Things," pictured above, was a beacon of yellow light at the Armory Show, a piece that prompted us to see what Porter is up to in 2015. Luckily, she'll be on view at the Miami, Florida's Cisneros Fontanals Art Foundation in a group exhibition titled "Impulse, Reason, Sense, Conflict" until March 29, 2015, as well as in "Tchotchke: Mass-Produced Sentimental Objects in Contemporary Art" at the Gund Gallery of Kenyon College until May 31, 2015.

Snapshots from The Armory Show '15