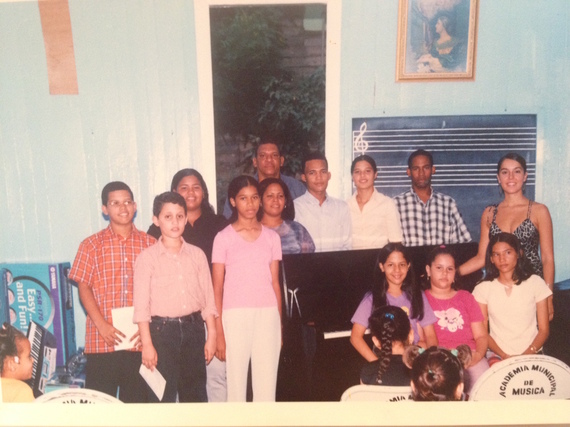 I grew up as a creative person in a small, industrial, Midwestern community. It's a region not unlike many others in the country, where practical vocations and athletic prowess are encouraged and rewarded -- leaving little room for (and even less understanding of) artistic pursuits. And yet, by some grand stroke of luck, that salt-of-the-earth, ag-centric town also had numerous exceptional creative institutions (thanks in part to the neighboring university). Those local artistic outlets, and the education they afforded, gave me the physical and mental space not only to distract myself from the farms and football games -- but to reimagine my life.

Jessica Hoffman Davis, founder of the Arts in Education program at Harvard, argues that art teaches us "how to see" and imagine: "The human ability to imagine is inborn, but this precious capacity is fragile -- ready to nurture or ignore throughout our children's education."

Davis goes on to identify 10 benefits of arts education, emphasizing that arts education transforms everyone it touches, not only those who become professional artists, by instilling imagination and autonomy, expression and empathy, interpretation and respect, inquiry and reflection, engagement and responsibility. The value of STEM subjects, she points out, does not make them more valuable than the less quantifiable gifts of arts education.

I escaped the cornfields to pursue more intense arts education at Interlochen Arts Academy, then, after college, I joined the Peace Corps. I had a very idealistic vision of how my service would change the world (I was 22, after all). Like all volunteers, I was assigned to an economically impoverished community. Electricity and water were intermittent, and advanced education and exposure to high art was something reserved for the wealthy. With so many basic unmet needs, it's not hard to understand why my vision for an arts education program was rejected by the Peace Corps. I therefore tried to assimilate into the prescribed tasks appointed to me -- but within a few weeks, my attention was diverted.

Not far from my home, there was a little zinc-roofed, wooden shack that housed the local "music school." Everyday, children and young adults would come to the one-room school to play half-broken, donated instruments. But the scene wasn't quaint -- it was shocking: The music, by any standards, was incredible. The sounds they were able to produce using tattered tools was alive and exuberant in an otherwise desolate environment. I knew I had to get involved.

The school also had a piano -- but no teacher. I played, and briefly taught lessons in high school, so I told the director to send me a few of the students, thinking I'd teach two or three in my spare time. Over 20 students showed up to the first meeting, with more students begging to be let in. We established weekly lesson times and I solicited sheet music from my former instructor and keyboard donations from wealthy local expats. The students not only never missed a lesson, they practiced on their keyboards (sometimes without electricity, and therefore without sound) for hours each day. Extended families and neighbors spilled out of the tiny space during our regular concert series. I solicited more money for a few of the truly exceptional students to study at the music conservatory several hours away -- requiring them to come back and serve as music educators in their hometown to repay their debt and pass on the gift. The program became the pride of the students and evolved into a permanent fixture in the community.

When I look at Davis's list of the virtues of arts education, I see the faces of those students. Autonomy, respect, responsibility, engagement, inquiry -- it's not just that they picked up a skill and honed a craft, but that these invaluable attributes and lessons came to permeate their lives and their vision of themselves. Arts education ignited their imagination and allowed them see themselves and the world they inhabit differently. And no standardized test can adequately measure the profundity of that legacy.