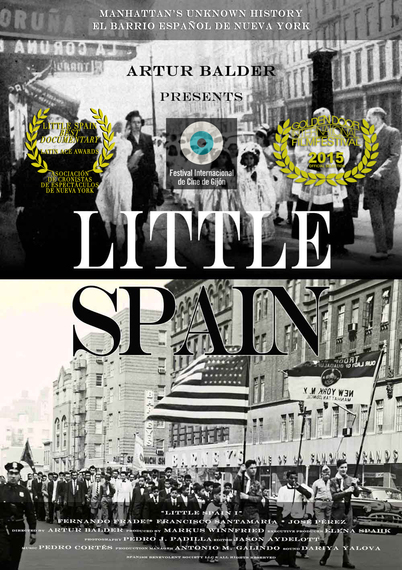 Artur Balder's Little Spain offer us a neglected, often forgotten, seemingly incidental part of the history of Spain and New York. They converge in the form of Spanish immigrants to the city, a place where, as the song goes, "if you can make it in New York, you can make it anywhere." Balder documents their attempt to make it as Americans while retaining their Spanish identity -- to establish a spiritually homogeneous Spanish community in a city known for its heterogeneity and materialism. Do they succeed? Do they Americanize even as they remain Spanish in spirit? New York is the quintessential center of the proverbial American multicultural "melting pot." The Spanish immigrants to New York are not the conquistadors and colonizers of imperial Spain, but humble settlers in an imperial America.

Do the American and Spanish merge into a Spanish-American? Balder's film suggests they do and don't: they remain separate and insular in their New York neighborhood even as they work and prosper in the larger American society epitomized by New York. It is this display of the ambiguity -- not to say uncertainty -- of the Spanish-American identity that is the most striking feature of Balder's film to me: Catholicism, Spain's religion, and American secularism, are shown to function together, seemingly seamlessly yet implicitly at odds. The New York Spanish Americans remain deeply if conventionally Catholic, as Balder's attention to their church-going and Catholic clergy suggests, even as they display their Americanism by way of parades. They seem more like joiners than individuals in Balder's film, yet their individuality resonates beneath their Catholic and American uniformity, suggesting they are unconsciously in conflict about their dual-identity. They are neither unequivocally Spanish nor unequivocally American -- it is less clear what it means to be unequivocally American (unless it means to be a white Anglo-Saxon Protestant) than to be unequivocally Spanish, however much Spain has been at odds with itself since the Spanish Civil War, and in decline since it lost its empire. Balder's Spanish Americans are incompletely American, for their hearts seem to belong to Spain wherever their bodies are. Balder invites us to wonder whether their Americanness is a superficial gloss on their Spanishness, unessential to it yet necessary, as a sort of a old, reliable emotional anchor, if they are to survive and prosper in the difficult brave New World of ever-new New York.

Thus the brilliance of Balder's film is psychological as well as social: he has insight into the mentality of the Spanish immigrants as well as an understanding of the everyday circumstances of their life. He offers us a psychological portrait of Spanish Americans in the course of examining their situation in New York. He suggests that they have created an insular ghetto that nonetheless looks all-American and outgoing on the surface. Baldur's Little Spain is a documentary film, but it documents emotions as well as a little society. In showing the contradiction that is their identity, his film achieves universal validity, for it conveys the larger dialectical truth about immigrants to a foreign country -- and there are many of them these days, particularly from countries that have failed their native-born, as contemporary Spain has. Balder's Spanish-Americans seem to have resolved the contradiction, having achieved a modicum of middle-class success in America, but they unconsciously have a split-identity if not a divided allegiance.

Little Spain shows that a documentary film need not be simplistically descriptive, but can be an aesthetic feat respecting the subtlety of the "moving" medium. Editing is a creative activity, a matter of aesthetic as well as informational choices; Balder's documentary is a work of art, moving subtly between different situations and individuals, showing their relationship with formal acumen as well as empirical accuracy. "Little Spain" is a kind of masterpiece, in that it masters its subject matter even as it shows Balder's mastery of his medium. He is as intimate with his medium as he is with his Spanish-Americans. His documentary affords a kind of existential experience of the existential reality of everyday Spanish Americans, even as it conveys the kaleidoscopic richness and complexity of their New York environment, registering its deep effect on them. His Spanish Americans may be assimilated Americans, yet their Spanishness seems to resist assimilation, for they remain traditional in their beliefs however modern in their appearance, proudly American outwardly yet defiantly Spanish inwardly.