The single most disturbing story coming out of the media and sports world last week was the horrific online abuse levied at Gabby Schilling, daughter of former Red Sox pitcher, Curt Schilling.

The story was first reported by Schilling on his 38 Pitches Blog.

Curt's daughter Gabby is also a pitcher, and they found out last week that she was accepted to Salve Regina University, where she will play softball.

Proud father Curt, who is active on social media and particularly on Twitter (@gehrig38) posted a Tweet that read "Congrats to Gabby Schilling who will pitch for the Salve Regina Seahawks next year!!"

Mixed in with the congratulations were some initial not-too-unexpected immature and jerky responses ("Can't wait to date her!," "Looking forward to partying with her," "I'll take care of her.").

But what followed was startlingly disgusting. Now, to be sure, Curt Schilling, now an ESPN analyst, is a polarizing figure and a bit of a loud-mouth. He is a staunch and vocal Republican and a symbol of the Boston Red Sox. He is a public figure and he has his detractors.

None of that matters, even a little bit. 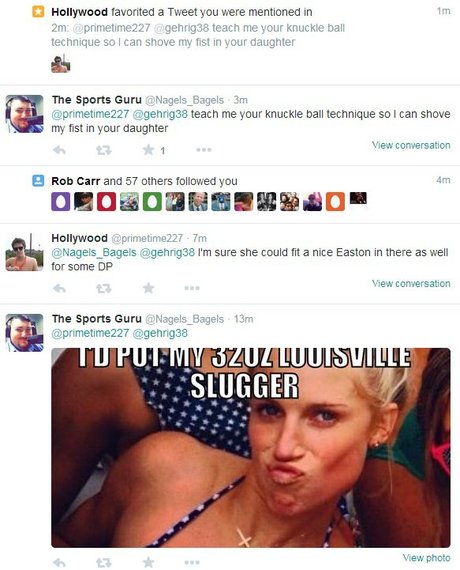 I post those Tweets here not to be sensationalistic, but because they have to be seen to understand how deeply and viscerally disturbing they are.

Curt Schilling did the same thing on his blog. He also collected information as to each persons real name, contact information, and school. According to Schilling, at least seven of the offenders are athletes playing college sports. Here are some others:

The Sports Guru"? Ya he's a DJ named Adam Nagel (DJ is a bit strong since he's on the air for 1 hour a week) on Brookdale Student Radio at Brookdale Community College. How do you think that place feels about this stud representing their school? You don't think this isn't going to be a nice compilation that will show up every single time this idiot is googled the rest of his life? What happens when a potential woman he's after googles and reads this?

The other clown? He's VP of the Theta Xi fraternity at Montclair State University. I gotta believe if Theta Xi is cool with a VP of one of their chapters acting like this I'd prefer to have no one I know in it. Also, does anyone attending Montclair State University have a student handbook? If so can you pass it along because I am pretty sure there are about 90 violations in this idiots tweets.

Unfortunately, I have no "explanation" for this kind of behavior. There isn't any. So there is no "Explained" part of this column today.

As a father and as a man, I am disgusted. It makes me tremble with rage.

So I'm just going to say this:

First, Schilling -- not usually known for getting his words just right -- got this one damned near perfect:

These boys have yet to understand one of life's most important lessons. In the real world you get held accountable for the things you say and if you are not careful that can mean some different things... This is a generation of kids who have grown up behind the monitor and keyboard. The real world has consequences when you do and say things about others.

And he has indicated that he is seeking consequences, including legal action.

Some of the offenders have already been suspended, fired, or kicked out of their schools, fraternities, jobs, and sports teams.

Let these cowards know that you don't get to sit behind your computer and hurl abuse at the world with impunity.

Second, there is nothing funny or cool or manly about this type of behavior. Not remotely. And if you are friends with or know one of these people -- or people that behave this way, in real life or online -- let's make sure they know that.

This type of behavior happens because there are no perceived consequences and because there is some bizarre group mentality social reward to it that I confess to not understanding completely. Let's cut that all off at the knees.

Right now, in the state of rage that I'm in about this, I'm thinking we need to do even more. Is it rational? I'm not sure. But I want billboards with these guys' pictures and tweets on it. I want each of their mothers and families to be contacted and shown what their sons are doing. I have a hard time thinking that these.... cyber-bullies -- I can't even call them "men" -- would have been saying those things, if they thought their mom was watching. Or anyone they personal knew and respected or loved, for that matter.

Is that naïve? I hope not. But I don't know.

When this types of misogynistic bullying awfulness occurs -- as in Gamergate -- the familiar refrain is: remember, men, you all have mothers, sisters, girlfriend. Do unto others as you would do unto them. But that's not even it. It's really just time to act human towards other humans. To stop spewing bile and hate to make yourselves feel bigger.

As to what we tell our daughters about all this, Schilling's closing paragraph to his daughter again says it perfectly:

P.S. Gabby I know you're likely embarrassed and for that I apologize. But as we have talked about, there is no situation ever in your life, where it's ok for any 'man' to talk about you, or any other woman this way (and truth be told no real man would ever talk this way anyway). It truly is time this stopped. I don't know where it started because it sure as hell didn't happen much when we were growing up. Like any dad reading this the only thing I need you to leave this home with when you head to college is the knowledge that I love you more than life itself and there is NOTHING I would not do to protect you. And while it may sound corny, it's nothing I'd ever be shy about saying in public, ever.

All of this is inexplicable. And it's long past time this stopped.