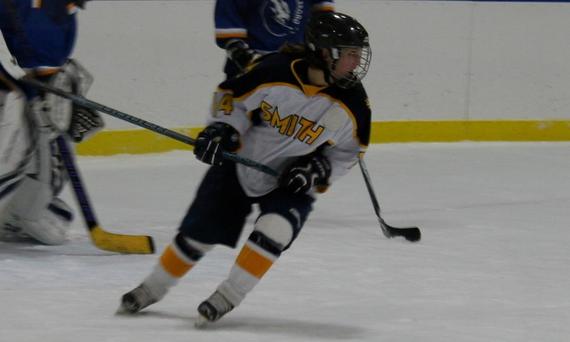 Since day one, I have been an athletic kid. I played pretty much every team sport I could before finally getting to play the one I wanted to: ice hockey. I fell in love with the game in second grade through trading hockey cards with a couple of my friends. When I realized that they were using their knowledge of the game to take my best cards, I started watching Flyers games, and I never looked back. Hockey became a part of me. I wanted to start playing right away, but my parents were hesitant. You can't blame them considering I am currently, at 24, 5'1" on a good day, and all they knew was the highly physical NHL game. They said no, so I did everything I could to immerse myself in the game outside of organized hockey. I played street hockey with the boys in driveways, watched every Flyers game, rollerbladed in my driveway after school practicing my skills and pretending to be John Leclair scoring the winning goal in overtime. Finally, in 8th grade, my parents let me start playing on a real team.

My love for the game only increased once I was playing in real life and not just imagining it out on my driveway anymore. In high school, I played on the school's newly created girls varsity team and joined a club travel team at the end of my sophomore year. Around that same time, I started questioning my sexuality. Once that first question popped up in my mind, I squashed it down and didn't let myself think about it. There was no way I could be gay and play hockey. Now, you might be thinking, "What is she talking about? Women's ice hockey? So many lesbians play ice hockey." That was the problem: the stereotype of the female athlete being gay. My teammates hated that stereotype, and they made it very clear. "Why are there so many lesbians on that team? I hate it! Everyone thinks I am a lesbian." And, "Ugh, I swear there is a man on their team. Either that, or a huge dyke."

These comments were never directed at me, but they hurt as if they were. In my mind, my teammates hated gay people, so, therefore, they would hate me if they knew. I went deep into the closet. That closet was dark, scary and lonely. I was overly anxious and severely depressed. There were times I thought about suicide, but if you ask any of my teammates during that time, I believe most of them had no idea. I had gotten that good at hiding things.

My mental health got to a point where I couldn't take it anymore and decided to live two different lives. I couldn't give up hockey, but I also couldn't stay completely closeted anymore. I was also involved in many arts programs in high school and started to come out to a few people in those communities. I had already come out to my parents and sister, who were extremely supportive, and my arts and hockey groups rarely overlapped, so I felt relatively safe.

When I was outed one afternoon at lunch during my senior year, my heart stopped. Too many people knew. At the time, I was captain of both my high school and club teams. There were people on my high school team that I played club hockey with, so if the high school team found out, it would eventually get to my club team. They would hate me, they would take away my captaincy, they wouldn't want me in the locker room and I might lose my amazing friendships with them.

I did everything I could to make them believe I was straight. My club team's favorite tournament movie (besides Miracle) was Step Up. They all loved, and I mean loved, Channing Tatum, so I talked about him too. I made so many comments about his eyes, his body, his dance moves, or anything else I could think of. I probably talked about him so much that my teammates got sick of it. It seemed to work. Hanging out one day, one of my teammates made a comment in reaction to me getting accepted to Smith College: "That would be like heaven if you were a lesbian." Everyone laughed, including me.

Once my senior season was done with each team, I decided it was safe to come out to them slowly. I was terrified -- so much so that I waited until I was on a choir trip to Italy to call my best friend on the team. I literally got as far away as possible. She was extremely supportive to the point where after a short chat she said, "OK, so how is your trip so far?" I came out to my next teammate while we were on the bench during a spring league game. I told her I was gay, and then hopped over the boards for my shift -- again getting as far away as I could in fear of reaction. That fear was unnecessary, and it turned out to be unnecessary for all my teammates. Everyone was supportive. It didn't change anything. If anything, we got closer because they now knew the real me. The fear that their casual homophobic language and hate of the female athlete stereotype grew in me was not needed. That type of talk happens in most women's locker rooms in most sports. Female athletes need to be aware of this and think before they speak. You never know who is listening, and you never know how a casual use of a slur will impact a teammate.

My experience at Smith College was the exact opposite of high school. On my tour of campus before applying, I spoke with a member of the hockey team who nonchalantly mentioned her girlfriend. There was no explanation, and it was just as if she had told me she had a boyfriend. It was normal. I went in to my first year completely out and comfortable with myself. The hockey team welcomed everyone with open arms. I had teammates who were straight, gay, bisexual and transgender. Everything was normal in the locker room. The friendly banter and trash talk that occurs in locker rooms went all directions. I'd give a teammate crap about a crush she had on a guy, and she would hit me right back about how awkward I was around girls.

Even though the atmosphere was positive within the team, I still encountered homophobia from other teams before and during games. We'd get looks and whispers walking into rinks, and slurs were thrown around on the ice occasionally. The worst experience of which came at the opening faceoff against another college in the northeast. As I glided in to the center dot with the opposing center, she lifted her head, looked me in the eye, and said "We are going to beat the s**t out of you dykes tonight." As much as it stung -- it motivated. I didn't tell anyone what happened and just played the game. When you are in a secure and supportive environment you are able to take those words and use them as motivation. We won that game. I scored four goals.

I had an amazing environment on the Smith hockey team. Every athlete deserves the chance to compete in an environment where they can be their full self. I did not play my best in high school largely because so much energy was directed towards passing as straight and hiding my secret. I would not have been able to have the success that I had at Smith without using that energy I saved by being honest about myself and putting it towards what I did on the ice.

Some say that homophobia in women's sports is dead. It is far from dead. The presence of homophobia in women's sports is different than that in men's sports. There is a fear among female athletes that if they speak up about gay issues, they will be automatically lumped into the stereotype of gay female athlete. There is less conversation because of that, and progress isn't happening as much as it could. There is also the fear of seeming too "masculine" and being lumped in with the stereotype of masculine female athletes. The stereotypes of gay and masculine female athletes are driven by gender expression. The stereotypical female athlete: short hair, muscular, deeper voice -- those are all qualities that society deems "masculine." There are things that some female athletes do these days while playing sports to feminize themselves: Wearing hear ribbons, well manicured matching nails, full make-up, pink equipment, purposefully short shorts, etc. I am not saying that any of these things are wrong, but they seem to be a more recent trend in some of the more "masculine" sports. Along those lines -- never assume a person's sexuality. Feminine athletes can be gay and athletes that presents as masculine can be straight.

Don't be too quick to declare homophobia dead in women's sports. It is not necessarily easier in women's sports to be gay -- it is just different. You can't compare apples to oranges, and expect to make progress. There are still many issues that need fixing, and we are doing a disservice to sport if we do not address them. Athletes like Irene Wust of the Netherlands, Belle Brockhoff of Australia and Anatasia Bucis of Canada are competing in Sochi as out members of the LGBT community. There are no out male competitors at this point, yet most of the vocal ally support has been from men. Very few women have spoken out.

We need more female allies in the fight against homophobia. Speak up and be heard. Once it feels OK to talk about homophobia in women's sports and athletes can come out without feeling like they are perpetuating a hated stereotype, the walls will come tumbling down.