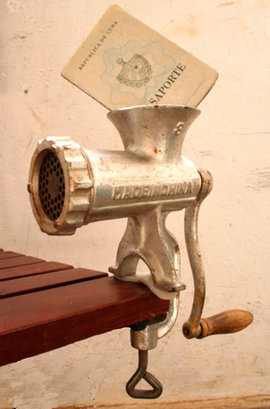 For the third time, in just a year, I've been denied permission to leave Cuba to travel abroad. In the Office of Immigration and Emigration in my municipality, a uniformed lady told me I was not "authorized to travel." I demanded that this functionary give me an explanation, but she was only the wall of contention between my demands and her hidden bosses. Like small children, who need permission to leave the house, so are we, the eleven million inhabitants of this Island.

Coincidentally, a month before I received this new denial, an important Cuban official denied that there were any restrictions on leaving Cuba. These declarations were made by Miguel Barnet, president of the Artists and Writers Union of Cuba (UNEAC), an official body that encompasses poets, novelists, painters, musicians and actors. The well-known official asserted that:

"People believe that we Cubans can't travel and I've been to more than 47 countries. Cubans are traveling; the only ones who don't travel are those in prison."

I have never been charged in court yet I am condemned not to leave this Island. The possessive logic of this Daddy-State sees it as normal that I, as a punishment for writing a blog, like a box on the ears for having believed myself a free person, will not receive the so-called "white card." The same thing happened to the old woman sitting next to me in the office, who could not obtain permission because her son had "deserted" while on a medical mission. Similarly, the boy waiting in the corner, because his athlete father was now playing under a different flag.

The list of the punished is so long and the reasons so varied, that we could establish a huge group of forced "stay-at-home" Islanders. It's a pity that the vast majority are silent, in the hopes that one day they'll be allowed to leave as one who receives compensation for good behavior.

I confess to you that I do not want them to allow me to travel as if it were a gift. I have a feeling that I will travel from Cuba when everyone can do it freely, but in the meantime, I will continue besieging them with my demands, my posts and my questions.

Castro Freedom To Travel Miguel Barnet Artist And Writers Union Of Cuba Cuba
This Blogger's Books and Other Items from...