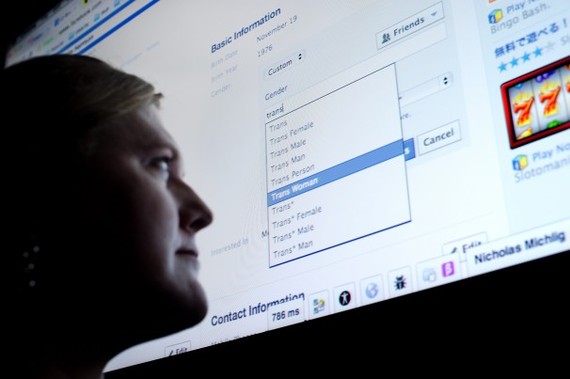 For those unfamiliar with the term "gender binary," it describes our current belief system that gender exists as only male or female. There are, in fact, many more genders. For an overview of some of these other gender types, check out this article in Cosmopolitan Magazine that I helped write.

I am the Executive Producer of the upcoming documentary, We Exist, which explores what life is like for individuals who exist outside of the gender binary. I am transgender and identify as gender-neutral. It is not that it is hard to be me, because that is like saying it is hard to have to wear a size ten shoe. Rather, it is hard to exist in a world that is designed to exclude someone like myself from every facet of society. Be it bathrooms, changing rooms, television, academia, government identification, healthcare or even language. It is hard to exist in a world that does not recognize your very existence.

Up until a few days ago, one of the only places where I was safe and free to be myself was my one-bedroom New York City apartment. As many may know, this typically isn't too spacious! However, my five-hundred square foot existence drastically expanded when Facebook unveiled over 50 different gender options for its users to choose from. Suddenly, my world opened up. I had a voice, I had a presence, and I had the proper gender identification and pronouns to match. Facebook's massive gender inclusion turned my once invisible presence in this world into something visible. I now existed. It was quite surreal.

I remember thinking at the time that this was going to make international headlines. What we were witnessing was history in the making -- our history in the making. Lo and behold, I got a call from a producer at CNN that evening asking me to appear on "This Hour with Berman and Michaela" the next day to talk about FaceBook's massive unveiling. I was thrilled to help bring my community onto yet another global stage.

Word got out quickly that I was going to be on the morning news discussing this monumental milestone. My peers were celebrating the fact that not only was Facebook recognizing the importance of our existence, but now also a major media outlet. This was gearing up to be one of those moments many of us work our whole lives for--a moment of mainstream recognition. I remember people asking me, "What are you going to say?" My response was, "I am just going to speak from the heart." Despite well-intentions, I never did appear on CNN, therefore I was unable to express my heart.

While en route to CNN studios -- one hour before airtime -- I got a call saying that my segment had been postponed indefinitely. Segments get canned all the time on live television and news. In fact, I had experienced this type of scenario many times before. This time it happened, however, I found myself flabbergasted. I could not believe that a historic event (which would literally change the lives of countless people around the world), was deemed not important-enough to make the cut.

I told the driver to turn around, and I sat in the backseat just as shocked as I was when I found out about Facebook's news only hours before. I feared that the achievement of being recognized by the world's largest social network was destined to become just as invisible as the humans (like myself) that lived outside of the gender-binary. Facebook's bold move to include those beyond the binary was embraced as newsworthy, but our long-hard struggle to attain this triumph was not.

The hardest part about not fitting into the gender-binary is the invisibility in this world. It is something that I am reminded of every day, no matter where I go. The issue with our invisibility is not just that we are unseen, but also that our struggles (and victories) are as well. Why? Because it is impossible see what is invisible. Therefore, I cannot judge others for not seeing something they cannot. Instead, I will take a different approach: I will continue to help people see that we do, in fact, exist.

We exist all over the world and all around. We are your children, we are your parents, we are your siblings, your neighbors, your co-workers, your friends, and even your lovers. We are artists, athletes, poets, adventure seekers, business owners, actors, leaders, followers, and everything in between. We are humans, just like the rest, who have been existing and living by your side all this time. So, let me say hello.

People like myself struggle every single day to be seen and to be recognized. Therefore, Facebook's change is not only a victory for us, but also a result of our life's work. Many have died before they could see this day, many never thought this day would come, and many simply gave up hope. What Facebook restored was hope -- something greater than just providing gender options alone.

My hope is that people can open their hearts to this, and perhaps see what I see: a future full of potential. I hope we can collectively begin to see the entirety of our human existence. I hope for others to simply recognize that both the exclusion and inclusion of a human being is a choice, and that we can start making inclusive decisions today. And I hope, just hope, that one day I can walk out of my five-hundred square foot existence into a world that provides me with many spaces and resources. But until then, Facebook is one of the only places in this world where I exist. As FaceBook engineer Brie Harrison aptly put it, "This change may only affect a small number of people, but to them, it's the beginning of something that makes a world of difference."