It's now over a year since the Great East Japan Earthquake, as the disaster is now officially called, and the subsequent tsunami devastated a huge swath of the Tohoku region along the country's northeast coast. With the anniversary looming, many communities in the U.S. planned commemorative events, and many people are still remembering how they learned of the disaster.

The initial news of the earthquake, which struck at 2:46 p.m. local time on March 11, 2011, were horrific: I got an email alert and tuned in CNN late at night Denver time and saw the tsunami devour entire towns, outracing cars of residents trying to escape its path. The total toll as of February was over 15,000 confirmed dead with over 3,000 still missing. The tsunami that wreaked most of the havoc after the earthquake was as high as 40.5 meters, or 133 feet -- that's 13 stories high -- and washed as far as 10 kilometers, or six miles, inland. Entire towns were erased in one terrible wave. And with the added terror of nuclear meltdowns at the Fukushima Dai Ichi nuclear plant, a city and its entire surroundings have become toxic and closed off for decades, with lives interrupted, homes abandoned.

The reaction to the disaster on both sides of the Pacific was swift and supportive. Nationally, JACL announced a partnership with Direct Relief International, which has now given more than $2.4 million in donations to eight organizations in Japan -- 100% of all donations went to recovery efforts, with no administrative fees taken out. The American Red Cross takes out a portion of all donations to pay for administative fees, but it's the best-known relief organization in times of crisis, and by the end of summer the Red Cross announced it had given $260 million to tsunami relief in Japan.

Beyond such high-profile efforts, there were dozens of fundraising events and benefit concerts across the U.S. including in Denver, where a number of fundraising events were held to channel money to recovery efforts. The Red Cross in Colorado raised $3 million for Japan. The Japan America Society of Colorado raised more than $126,000 and hand-delivered a check directly to aid agencies on the ground in the affected part of Japan at he end of the summer. (Full disclosure: I'm a board member of JASC, although I wasn't involved in the fundraising efforts.)

The Asian Pacific Development Center's "Power of Solidarity" concert, which was held just weeks after the quake, raised over $30,000. There were other concerts and fundraisers organized on the fly to raise money for disaster relief and recovery efforts.

All of the expressions of goodwill and condolences -- and donations, and volunteer aid workers -- from around the world were much appreciated by the Japanese government. In the run-up to the March 11 first anniversary of the disaster, the Japanese government sent out groups of diplomatic emissaries to thank communities for their help.

A couple of weeks ago, Yoshio Onodera, the Director of Risk Management for Miyagi Prefecture, the state most affected by the tsunami, visited Denver with a delegation to show his government's appreciation. 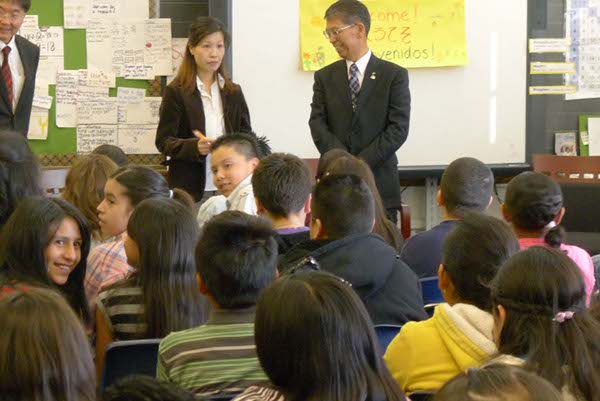 Onodera made three stops during his swing through Denver. He began the day with a visit to Garden Place Academy, an elementary school in the Denver Public School District that serves a lower-income, mostly Hispanic neighborhood in North Denver, in the shadow of the intersection of I-70 and I-25.

Although 90% of the school's students are on the federal school lunch program, the students -- and their families -- held a week-long bake sale in the playground and donated $425 to the Red Cross. It was a touching show of support.

Onodera told the school's principal, Rebecca Gaustad, in a meeting before he met a 5th grade class, "Your support has been a great hope for all the children and all the people of Japan."

Onodera then spoke to a 5th grade class and thanked them in person, and heard from student government representatives. The school was prepared for the visit -- there were signs everywhere welcoming Onodera and his group in English, Spanish and Hiragana Japanese. The students gave the visitors gift bags of omiyage, or small gifts, and Onodera in return gave out candy and Miyagi Prefecture pins to the students. It was a small but significant exchange program, that hopefully will resonate in the kids' minds in the years to come.

After the emotional visit to the school, the Miyagi delegation presented a more adult report of both the immediate response to the quake last year, and the result of all the rebuilding efforts in the months since. The damage just in Miyagi Prefecture was staggering: $115.54 billion, according to Onodera, who showed a PowerPoint slideshow that included some before-and-after images of his home state.

As Director of Crisis Management, he described the minute-by-minute response of his office: the temblor hit at 2:46 pm with a tsunami warning issued at 2:49. At 3:02 the prefecture requested military aid be deployed to the area, as a Disaster Task Force was convened. The report revealed a local government that was quick to react. But the scale of the disaster was one that caught everyone off guard, even if they were prepared.

Onodera spoke about Operation Tomodachi, the U.S. military mission to aid the stricken area. The initiative was aptly named, because "tomodachi" is Japanese for "friend," and emphasized how the outpouring of sympathy, help, volunteers and money from acround the world was appreciated by everyone in Japan. (The "thank you" videos making the rounds attest to that.) Taichi Hanzawa of the delegation, from the Miyagi Prefecture's International Affairs Division of Commerce, Industry & Tourism, made a pitch for business investment (tax breaks! incentives!) and tourism to come to Miyagi and help restart the economy.

After the lunchtime presentation, the delegation went on to meet with Colorado Lt. Governor Joe Garcia (Gov. Hickenlooper was traveling) to personally thank him as a representative of the state. Such scenes were repeated throughout the U.S. as a show of gratitude from Japan's Foreign Ministry.

After that the Miyagi delegation returned to Japan, the Consulate General of Japan in Denver marked Sunday's anniversary with a private ceremony for invited guests. Meanwhile, there were events all over the country to commemorate the disaster, and one opening of a powerful documentary film that is being screened across the country at AMC theaters, but unfortunately not here in Denver.

Pray for Japan was shot and directed by Stu Levy, an American filmmaker who lives in Tokyo. When the earthquake struck, he immediately volunteered to help in the relief efforts in Tohoku, and was amazed at the solidarity and resolute spirit of the survivors even in the wake of such a horrible event. He began shooting footage even as he volunteered, and eventually, the themes emerged that he built his film around: School, Shelter, Family, and Volunteers.

Levy shot scenes that tell stories that illustrate these themes, like Kento Itou, the teenage boy who lost his grandparents, mother and five-year-old brother to the tsunami, and organizes a memorial taiko drum performance and hoists a display of koinobori, the Children's Day carp flags that his baby brother Ritsu loved. Another theme of volunteers focuses on Pakistani immigrants who live in Japan, who drove to the area in the days after the quake to help however they could. They ended up serving food -- lots of authentic curry (which must have been a shock to the Japanese, who love curry but make a different gravy style of the cuisine) for survivors in the town of Ishinomaki. The residents' farewell ceremony when the Pakistanis leave is a moving expression of gratitude.

The film opens March 14 nationwide (except Denver... ) as a charity event, so check your local listings and see it on opening day. Bring some tissues just in case. And watch for it to show up on DVD, or in your cable's On Demand menu, on Netflix or RedBox.

Also on March 14 in Denver (since we can't go out to see the film), there's a fundraising concert for Tohoku by the Japanese taiko drum group Matsukawa Kyougaku at DU's Newman Center. It's part of the group's "Arigatou" (Thank You) Drumming World Tour, sponsored here in Denver by Domo Restaurant owner and Aikido Sensei Gaku Homma's Nippon Kan organization.

I don't know anyone who was killed in the Tohoku region, and all my family, friends and acquaintances in Japan were fortunate to be largely unaffected by the disaster. But the tragedy hasn't played out its final scene yet, with the Fukushima nuclear plant meltdown still unresolved, and thousands of people forced to evacuate.

There's a happy ending for Tohoku and for all of Japan, though, in its people's resiliency. It's a cultural trait that can sometimes hold Japanese back (think of the hard-working but self-effacing employee who never gets the management promotion because he's not aggressive), but in times of crisis, it kicks in and gets things done. The damaged region is scarred but cleaned up, and much of the devastated area has been if not rebuilt exactly as before, then at least well enough to go on living, or to start a new life.

The many stories of the Japanese spirit like the ones on display in Pray for Japan have been inspirational, and the rest of the world will look on in admiration as the people of Tohoku pull themselves up again. I know I'll be watching.

LINKS TO COVERAGE OF THE ONE-YEAR ANNIVERSARY

Amazing and cool: The Washington Post presented a series of before-and-after photos of Japan right after the earthquake and last week ... overlaid over each other so you can slide the image and see one then the other.

The New York Times used the same online technology to create a similar gallery of before-and-after images of the stricken area.

Here's a Finnish newspaper website that has more photos that compare Japan in the days after the quake to today. Google Translate is always funky, but helpful...

The Pacific Citizen newspaper of the JACL, which usually covers Asian American news, published this story marking the anniversary by interviewing survivors in Japan: "Rebuilding Japan, One Year After the Earthquake and Tsunami"