While Syria burns, Gaza explodes and ISIS captures another Iraqi town, another full-blown conflict threatens to further destabilize the Middle East, this one between Armenia and Azerbaijan. For months now, Ilham Aliyev, one of the worst dictators alive, has been indiscriminately shelling the Republic of Nagorno Karabakh, a formerly Soviet Socialist Oblast located within Soviet Azeri territory populated by ethnic Armenians.

A little history may be in order. In 1991, the Soviet Union collapsed, Nagorno Karabakh, or Artsakh as Armenians refer to it, petitioned Moscow to be re-attached to Armenia. When Moscow ignored Stepanakert's request, the Armenian enclave declared independence. Azerbaijan, then ruled by Ayaz Mutalibov, responded with pogroms against Armenians in Baku and Sumgait and by declaring war against Nagorno Karabakh, mercilessly bombing the small four thousand square mile enclave. By 1994, Nagorno Karabakh, abetted by Armenia, won a difficult but decisive victory over Baku. It did not come without a cost. The war claimed over 30,000 lives. An estimated 300,000 Armenians from Azerbaijan and 450,000 Azeris from Armenia and formerly Azeri territories went straggling back to respectively Armenia and Azerbaijan proper. Both countries have had a persistent refugee problem since. And the lovely cosmopolitan fabric of the Caucasus was rent once again. 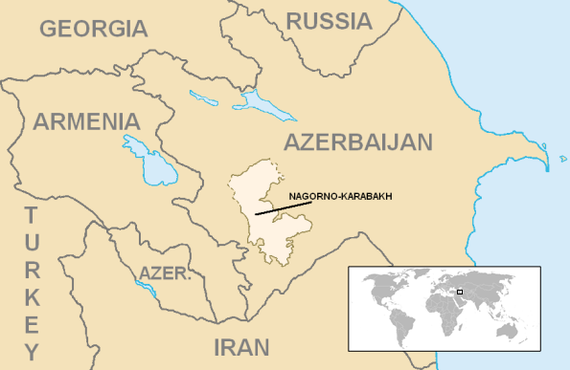 Back in Baku, Mutalibov was succeeded by Haidar Aliyev and then his son Ilham in completely trumped-up elections. The Aliyev clan has run Azerbaijan as if it were its own personal bank account and backyard for the past twenty some years. Armenian leadership over the same period has not been ideal either: corrupt and megamoniacal, it has however avoided the type of morally bankrupt hereditary dictatorship that the Aliyev clan has imposed on their country. Needless to say the Aliyevs have become billionaires several times over while their own people have seen only limited benefits from its booming oil trade.

Serj Sargsyan, the President of Armenia, is short and squat and wily in appearance; Aliyev is tall and gangly and with an empty open stare that suggests an absence of what Agatha Christie's famed detective Hercule Poirot used to call little grey cells. Worse than his perceived lack of intelligence, Aliyev continues to lie to his people about the causes of the ongoing conflict between Nagorno Karabakh and Armenia. He insists on painting the Armenians as aggressors and the Azeris as historical inhabitants of Artsakh out to innocently defend their lands; the exact opposite is the case. Since Russia brokered a tentative peace agreement between the two nations in 1994, Azerbajian has broken the ceasefire over 200 times. But in the past week, Aliyev has intensified attacks on Armenian border towns. Three days ago, Azeri shelling killed five Armenians; retaliatory fire claimed 25 Azeris. Aliyev, who has falsely claimed that he has triumphed over Armenia politically and economically and that he can do so militarily as well continues to watch his own soldiers die in numbers which exceed Armenian casualties. As if his own people they were mere flies, expendable in some futile attempt to regain land over which it has no legitimate claim.

Russia, which arms both Armenia and Azerbaijan, may of course be at the heart of recent hostilities. Putin may well be attempting to kill two proverbial birds with one stone, threatening the West with the possibility of a new regional conflict, while also trying to convince Armenians that they need Russian protection. Russia has never been Armenia's true friend and it is certainly not Azerbaijan's -- if Putin had his way, he'd turn both countries back into Russian -- scratch Soviet Union provinces or Republics.

While emigration from Armenia has been constant, the country has also slowly rebuilt its economy and educational institutions with help from its powerful Diaspora. Furthermore while Azerbaijan may still be feeling the sting of national humiliation at the 1994 loss of territories, all evidence points to the fact that the Azeris will not fight as hard as the Armenians who faced the first large scale Genocide of the 20th century at the hands of Ottoman Turks in 1915. And why should they? Baku is prosperous, and Azerbaijan a mid-sized country on the shores of the historically scenic Caspian Sea. What sane father or mother would send his or her sons to die over contested lands far away in the mountainside near Armenia? The Armenian slogan of never again, however, still holds for Armenians around the world. Armenia was the most technologically advanced Soviet Republic along with Russia and its army is currently considered one of the strongest in the region -- so there is little chance of Azerbaijan making military inroads. In fact, the opposite is true -- Armenia may claim even more territory if forced into a full-scale conflict again. And Baku's gambit is a poor one at that: with an estimated 50 to 75 years of oil reserves left to exploit, it is doubtful that someone as greedy and narcissistic as Aliyev will risk future billions in an attempt to liberate a mountainous land inhabited by foreign people and devoid of natural resources.

Azeris need to understand that Aliyev is not only a vicious dictator, but that his current policies will ultimately lead to the demise of this regime and country. The Armenians and Azeris have one mutual advantage: unlike the Israelis and the Palestinians, for example, who live in a patchwork of territories within each other's respective lands (i.e. there are Israeli Arabs within the borders of Israel: Gaza and the West Bank as a pairing make little geographical sense), Armenia and Azerbaijan today have one neat border: Armenians on one side, Azeris on the other. Nakhitchevan, a small cone shaped patch of land which the Azeris depopulated of its native Armenian population is an exception: it lies to the Southwest of Armenian territory and borders Iran and Turkey -- but as a result of this last factor, it it also has a lifeline. (By Armenia I mean Armenia and NKR united, doing away with the political fiction that the two countries do not de facto act as one united country). 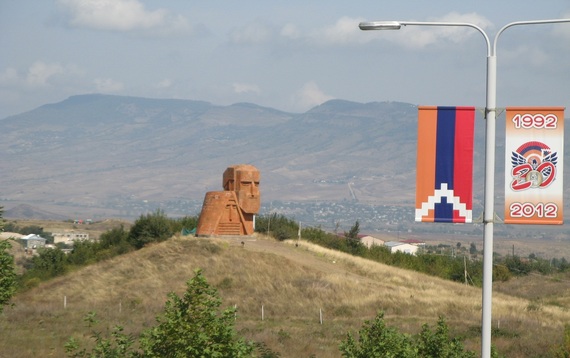 Azerbaijan needs to cease its hostilities towards Armenia and lift its unilateral blockade of the country (as does Turkey, but that is another not wholly unrelated story). Armenian and Azeri civil societies need to begin substantive cultural and educational exchanges. Aliyev and his henchmen need to stop their propaganda campaign against Armenia domestically and abroad: it fools few foreigners while it brainwashes its own people.

In other words, a true peace process needs to occur. The United States and Russia -- or the current OSCE Minsk Group -- should accelerate their efforts in this direction before it is too late. Let's put an end to historical or territorial recriminations. They make no sense in this case. Both Azerbaijan and Armenia have enough territory to survive and prosper. And without each other, neither country will reach its true potential -- economic or otherwise. If hawks such as Aliyev can be overthrown or the Azeris finally see reason, then Azerbaijan and Armenia, along with their joint neighbor Georgia can form an economic corridor that would be a shining example to the world. The alternative -- war and more death -- is not a pretty option to ponder. Cautious optimism may be in order since Presidents Sargsyan and Aliyev met with Putin in light of recent events on August 10 and agreed that the conflict needs to be resolved peacefully.

Finally, as an aside, I would like to say that I am a pacifist. I do not believe in violence, which history has taught us only begets more violence. But there are facts on the ground. NKR will l never return to Azerbaijan, willingly or otherwise. It is time to build peace. Time for Armenians, Azeris, Georgians and Turks to bring prosperity to the Caucasus together. Like it or not the four countries, along with Iran to the South, share more things in common than they do differences. True courage on the part of Presidents Sargsyan and Aliyev will bring them to the negotiation table, in an earnest desire to resolve this conflict, once and for all.