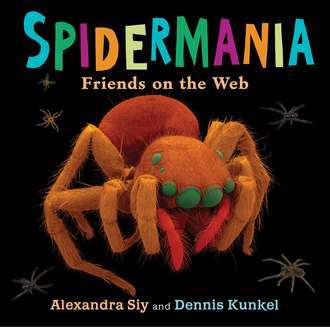 As the holiday of creepy, crawly things reaches its celebratory date tomorrow, I have to admit I am NOT fond of spiders. I don't exactly suffer from arachnophobia but after reading Alexandra Siy's and Dennis Kunkel's new book Spidermania: Friends on the Web I am extremely glad that some people have found them worthy of study.

They don't look anything like us. They have two body parts and eight legs and various numbers of eyes that form a pattern on the head. Most amazingly, they have organs, called spinnerets, that create a variety of silks that can be "stronger than steel, tougher than nylon, stretchier than a bungee cord and stickier than glue." The silk that encloses spider eggs has been an inspiration for Kevlar -- "a man-made material used to make bulletproof vests, cut-proof gloves and super-light kayaks."

The book is illustrated with photographs and Dennis Kunkel's glorious electromicrographs, which have been colorized to show important features. Here are spiders in all their grotesque glory! You can marvel at the sight of silk emerging from a spinneret, the fangs of a "brown recluse" spider and the eight eyes of the jumping spider.

Yes, this is a children's book for kids in middle grades but that's only because grown-ups don't often read about something they know little about. In my mission to shed light on the world of children's nonfiction literature, Alexandra Siy's crystal clear, lyrical writing and Dennis Kunkel's microscopic details show spiders in all their magnificence. Spidermania: Friends on the Web is the perfect antidote for turning fear into fascination.