Co-authored by Noah benShea, an international best-selling author/philosopher and Executive Director of The Justice Project 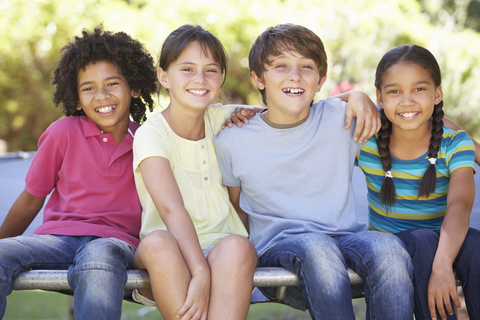 © Monkeybusinessimages | Dreamstime.com - Group Of Children Sitting On Edge Of Trampoline Together Photo

President Obama used the phrase in his 2015 state of the union address. Countless politicians have followed suit. But even the most sincere intentions do not always mean that much will get done about what is wrong. Sincerity needs an action arm if children who have been treated with indifference or worse are going to know they really matter.

Sincerity and action came together in this week's article about young people by Howard and Sheri Schultz in the New York Times. They, along with other civic leaders and corporations including Starbucks, Microsoft and JPMorgan Chase, have made a serious commitment to the 5.6 million young people ages 16 to 24 who are disconnected from school, from vocational training, and from employment. The good news; these folks aren't running for office. These are business leaders to whom action is second nature.

Many of us, in a position to do something that matters, are already suffering from a media overload of disaster news, creating compassion fatigue. So these kids can easily become one more reason to throw up our arms and instead reach for smart phones looking for the text about dinner plans.

It has been far too easy for far too long to give up on people in the age range the Schultz Family Foundation wisely chose as a focus. And amen to the facts on the ground that the Schultzs use as a call to action: "...these young people represent a significant untapped resource of productivity and talent."

More importantly, if you are one of the young at risk, the Opportunity Youth initiative is a real life message that you matter. The organizations supporting this effort are putting actions, not just words, into the workplace and aiming to give 100,000 of these "opportunity youth" the skills they need to enter the workforce. Now! And now matters; promises aren't bankable.

We applaud this and any serious efforts like this to help disconnected teens and young adults. These are people who have, with rare exception, simply been dealt a bad hand. And too many of them chronologically moving into adulthood, are economically falling off cliffs.

Again, the facts: This could be an incredible youth force for good, yet they have a current unemployment rate twice that of the general population and three times higher for teens ages 16-19. These factors fuel social isolation, incarceration, addiction, and health issues that circle back generation after generation. Where we don't pay attention, now; we pay later, and later, and later.

There is one other painful disconnect which lurks behind the scenes and plays out, often brutally, in the lives of these young people. It is the fractured or simply absent networks of trustworthy adults.

Any effort on this front makes a difference if it makes a difference in your life. But as inspiring as the new effort is, the impact, once scaled up, will reach a bit less than two percent of the disconnected youth population. We have to ask the obvious question: what more can be done to prevent the growing tragedy of young people free-falling when they reach this critical age?

The answer is: a lot can be done. More and more, research is showing that having trustworthy adults in their lives is a crucial protective factor for vulnerable children and young adults. If you are a parent and doubt this for a moment, think about where your children would be without you.

Educational success will also be a key factor in helping opportunity youth succeed in life. Their high school graduation rate is 18% below their peers. Only one percent achieve at least an associate's degree compared with 36% of youth generally.

To turn those statistics around, we need to let young people know they have a path to success. And they can access that path. When young people approach this age with a sense of hopelessness--that success is outside their grasp--they are more likely to experience early onset of all the social and personal failures that will haunt them, and us, for a lifetime. Add to this anguish the reality that people who feel they have no value, treat the world the same way.

This is not a red or blue issue; this is a green issue. In a world of limited resources, caring and doing something about the caring saves big money, and we're talking real big. A 16 year old youth who is under-attached probably costs taxpayers about $235,680 over a lifetime. Multiply this even by the 100,000 the Opportunity Youth initiative will impact and the dollar savings to our country will have your head shaking. New research also helps to point the way to approaches that can accomplish this. Researchers at Stanford and elsewhere have shown that changing mindsets in specific ways can dramatically enhance academic motivation and success.

To those who are already making this effort with vulnerable youth, the mindset reset is this: the best avenue to large scale social change is collective. No single organization owns the problem, and all players must own it together. And on this issue, none of us are out of the social ecosystem.

Caring matters; charity matters. But the mindset reset for funders is this: categorical funding leads to a confusing fragmentation of services and inappropriate one size fits all approaches. Opportunity youth are most likely to need highly tailored plans that maintain long term relationships, provide multiple ways to get back on track, incorporate developmental experiences, teach strategies for overcoming obstacles, and build self-esteem.

We believe that all people can succeed despite adversity. Over several decades of work with foster youth, we have seen how highly motivated they are to succeed and give back to others. They have told us that what often stood in their way was the negative messages they perceived about their futures. And what helped them the most? Trustworthy and long-lasting adult relationships.

Adults matter to children. Whether it is the earth, the seas, or the air we breathe, we cannot destroy our planet's assets and hope to survive, let alone prosper. These young at risk are also our "assets," whose untapped potential is being wasted. This is not about anyone mattering more or less, but that all of us matter. And these are matters needing more than wise words absent wise actions.