It was 20 years ago that Amy Heckerling's film Clueless updated Jane Austen's Emma, with Alicia Silverstone as a Beverly Hills teenager who thinks she can fix everyone. It is an enduring favorite thanks to its iconic fashions, quotable dialogue and irresistible young performers.

Jen Chaney's delightful new oral history of the making of the film, As If! includes comments from the actors and the production team, behind the scenes details (Reese Witherspoon was considered for the lead role), and a sweet tribute to the late Brittany Murphy, who got a makeover in the film as Tai. There are even some thoughts from scholars who admire the way the film captures the themes of Austen's book. I loved it and was thrilled to get a chance to ask Chaney about it.

When and where did you first see Clueless and what did you like about it?

I first saw it toward the end of 1995, shortly after it came out on video. I watched it with a friend of mine from middle school, but we were both in our early 20s at that point. Obviously, I wasn't a teenager then, but one of the things I liked about the movie was that it made me feel like one again. Watching it reminded me of how I felt 10 years prior, when I saw movies like The Breakfast Club or Pretty in Pink and just wanted to keep watching them over and over again. Clueless is addictive in that same way. Like many people, I also thought the dialogue was really great and, of course, I immediately developed a crush on Paul Rudd.

You point out that Clueless was more prescient than many of the sci-fi films of its era. It has technology that we now take for granted but that did not actually exist when the film was made. What are some examples? 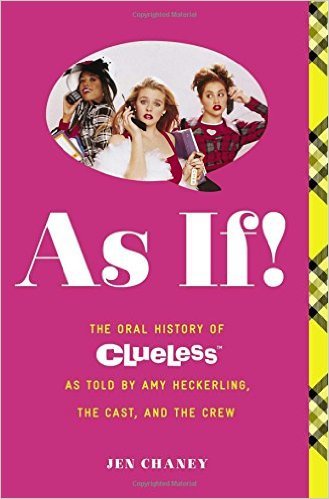 The biggest example is the prevalence of cell phones in the movie. In 1995, cell phones existed, but most Americans didn't have them, and most teens certainly didn't. So the idea that everyone in Cher's world was always getting phone calls or talking on phones simultaneously seemed foreign and really funny. But it actually predicted the way we live now. Obviously smartphones in 2015 are a lot smaller and more advanced than they were in 1995, but the ubiquitousness of them is spot-on.

That's also true of the computer that Cher uses to choose her outfit for school. She's able to match up different pictures of clothing and place them on her body using a touchscreen -- again, outlandish for 1995, but something that can be done now using mobile fashion apps. Amy Heckerling was ahead of her time in showing us some of these things.

Costume designer Mona May had to create looks for the characters that would not be out of date by the time of the film's release. What did you learn about the iconic costumes she created? How many changes did Cher (played by Alicia Silverstone) have? What happened to her clothes?

The key thing about the clothes, especially those worn by the main female characters, was that Mona was aiming for things that were girly and fun, a departure from the baggy, flannel, dark-colored clothes associated with the grunge movement of the early 90s. Amy Heckerling wanted the clothes to reflect the changing seasons, so we see the yellow plaid on Cher in the fall, the red Alaia dress around the holidays, and then softer pastels as the time changes to spring. But everything is very bright -- there's very little black on Alicia Silverstone -- and a more stylized version of what a preppy school girl might wear. As Mona May said, a lot of it is pretty classic -- sweater vests, Mary Janes -- but mixed in a way that makes it look more high-fashion.

Silverstone had 63 costume changes alone, and there were quite a number of changes for other characters, too, so May and her team had a lot on their plate. She had to be creative and mix designer pieces with more basic ones, always keeping in mind how everyone would look together in the frame.

As far as what happened to Cher's clothes, the entire wardrobe was given to Alicia Silverstone as a gift, but according to an Entertainment Weekly piece, Silverstone gave most of the clothes away. (I know -- heartbreaking.) I was unable to confirm with Silverstone exactly which pieces she gave away, but I know that the Alaia dress was auctioned off by Phillips in England a few years ago.

Which of the catchphrases and slang terms in the film were real and which were created by writer/director Amy Heckerling?

The phrases were a mix of slang terms that Heckerling discovered from various sources, including the UCLA slang dictionary, and things she made up herself. For example: the terms "Betty", "Baldwin" and "I'm Audi" all come from the UCLA dictionary. A lot of what Christian says is taken from a jive talk dictionary that Heckerling had, as well as old movies. (When Christian tells Cher, "You're a down girl," that comes from West Side Story.) The term "hymenally challenged" is something Heckerling made up; she also may have come up with "surfing the crimson wave," but she couldn't recall. Occasionally, the actors would chime in, too. "I'm keepin' it real," for example, was something Donald Faison heard some kids saying in New York, so he incorporated it into the scene where Murray's head gets shaved.

What were some of the challenges Heckerling faced with such a young and mostly inexperienced cast?

Because the dialogue was so dense, sometimes the actors had a hard time getting it all out. Silverstone, for example, famously mispronounced Haitians, which actually worked out well for the movie because it sounds exactly like something Cher would say. Faison sometimes had a hard time getting through some of his more complicated lines, like the one about "female pronouns having mocking but not necessarily misogynistic undertones." Overall, my sense was that Heckerling developed a good relationships with the actors and that they really respected her. Heckerling is young at heart, and I think she treated her actors as equals, which made them feel really comfortable with her.

Filmmakers usually get a lot of "notes" with requested changes from the studio executives before it is released, but in the case of Clueless, Amy Heckerling only got one request from then-studio head Sherry Lansing. What was it and why?

Lansing loved the movie when she first screened it. Her only note was this: there's a scene in the movie where Cher's voice-over says that looking for a boy in high school is like looking for meaning in a Pauly Shore movie. Originally, that line was supposed to say, "like looking for meaning in a Chevy Chase movie," but Lansing asked Heckerling if she could change it because she knew Chevy Chase socially and was involved in some charities in which he also was involved. So Heckerling changed the line.

The characters in the film attend Bronson Alcott High School. Where did that name come from?

The name is based on Amos Bronson Alcott, the father of Louisa May Alcott. Heckerling liked the idea of naming it after him because he was an advocate for educating women. The name also is inspired, in part, by actor Bronson Pinchot, who was Heckerling's boyfriend when she was making Clueless.

Who were some of the other actors considered for the movie? How did Silverstone get the lead role of Cher?

Casting began on Clueless when the project was still at Fox, then resumed after it got picked up at Paramount. Between those two studios, many, many actors were considered for key roles in the movie. Not all of these people actually auditioned, but they were all part of the conversation: Reese Witherspoon, Ben Affleck, Gwyneth Paltrow, Terrence Howard, Jeremy Renner, Dave Chappelle (!), Sarah Michelle Gellar -- the list goes on and on.

Silverstone was always Heckerling's first choice for Cher, back when the project was at Fox. She considered other actresses, Witherspoon being one of them. But she had seen Silverstone in the Aerosmith videos and thought she had a quality that would work perfectly for Cher. Separately, Carrie Frazier, who was the casting director on Clueless before it went to Paramount, also recommended Silverstone based on her work in The Crush. By the time Clueless left Fox and was getting shopped around to other producers and studios, Silverstone was attached to the project.

Which interview was the toughest to get and who had the best memory for details?

A second interview with Alicia Silverstone was tough -- I ultimately got a second round of answers from her via email. Many of the actors were tough to get because of scheduling and the fact that their handlers are very protective of their clients. Amy Heckerling remembered a lot, of course, and so did director of photography Bill Pope, along with others on the crew. Of the main cast, I would say Paul Rudd and Donald Faison remembered a lot pretty vividly. And people who played smaller roles -- like Herb Hall, or Jace Alexander, or Ron Orbach, the messiah of the DMV -- remembered quite a bit because they were only on set for really concentrated periods of time, so I think their experiences really got locked into their memories.