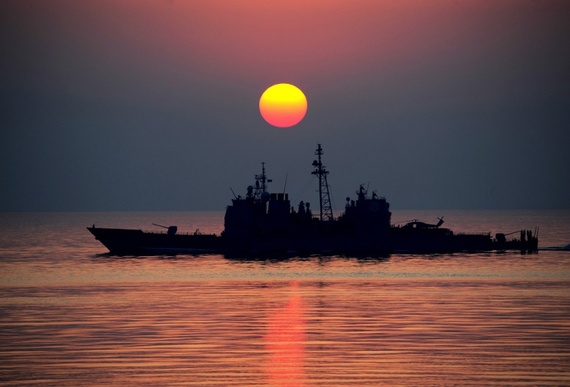 As our hearts go out to Paris, Washington's collective head will once again pivot away from Asia and focus singularly on the war on terrorism. As this spectacle of angst unfolds, cable news shows will see ratings spike. The Situation Room will turn off the lights on every map but those of Syria, Iraq, and Europe. Presidential candidates will thump their chests - even as debate moderators toss Rising China questions in the trash. And as fear reigns over the West, a revisionist Beijing will quietly continue its expansionism in the East.

In truth, no country has benefited more from the rise of terrorism than a Rising China. Since 9/11, and under the cover of Al Qaeda and now ISIS, China has steadily assembled one of the finest militaries in the world - even has Beijing has accelerated its aggression in the East and South China Seas.

On the eve of 9/11, Washington had already begun its first pivot to Asia as seasoned hands within the fledgling Bush Administration clearly understood China posed the greatest long-term threat. However, a handful of suicide bombers commandeering several passenger jets changed all that, and off U.S. forces went to the hills of Afghanistan and the deserts of Iraq.

Over time, the seemingly endless wars in Afghanistan and Iraq and now Syria have bled our treasury dry even as we have left untold blood and treasure in the region. To the delight of Beijing, both the length and inconclusiveness of these wars have left an America public war-weary and without the stomach to handle yet another challenge in Asia.

The high cost of America's war on terrorism has also contributed to a policy of budget sequestration - the poster child of partisan dysfunctional. Severe, across-the-board military budget cuts, in turn, are now calling our readiness into question. Today in Asia, we may talk more loudly at times but with each passing day, we carry a smaller and smaller stick and fleet.

There is also the matter of Bush's Grand Distraction itself. The Bush legacy here - embraced seamlessly by Barack Obama - is one of simply not paying enough attention either to China's salami-slicing in the South China Sea nor a rapid Chinese military buildup obsessively focused on sinking U.S. aircraft carriers and driving America out of the Western Pacific.

Most subtly, the land wars that we have fought in the Middle East have prevented a long overdue transition to a more naval-oriented force better suited to the Asian theater. The biggest strategic casualty - one that makes a mockery of Hillary Clinton's well-intentioned but poorly executed pivot - has been an America fleet that has steadily shrunk from a high of 600 ships during the Reagan years to under 300 ships today.

In fact, America's singular focus on the Middle East has played right into a strategic opportunism that goes to the very heart of Chinese strategy. As The Hundred Year Marathon author Michael Pillsbury has framed it:

"In Chinese philosophy, forces shape things. Humans, if they want to be smart, understand the forces, and either nudge them or go with the flow, align themselves with those forces, and then history unfolds."

Beijing over the decades has indeed sought to "nudge" history in its favor as America has been distracted. In 1962, during the middle of the Cuban Missile Crisis, China invaded India and firmly secured possession of Aksai Chin - even as Kennedy's pre-occupied White House ignored repeated entreaties from a beleaguered Nehru to come to India's rescue. In 1974, China nudged again - or more aptly salami-sliced - with its taking of the Paracel Islands from a South Vietnam that Nixon and Kissinger had all but abandoned and the U.S. no longer wished to defend.

In 1988, China nudged yet again when it built an illegal observation post on Fiery Cross Reef in the South China Sea. When Vietnam responded by landing troops on nearby Johnson South Reef, Chinese warships slaughtered them - and then took control of six more of these disputed Spratly Islands. At the time, a disinterested U.S. did nothing. Today, these are the very same reefs and rocks Chinese and U.S. warships are now jockeying over as China has transformed these "rocks in the sea" into fortress garrisons - Fiery Cross Reef alone is home to a 10,000 foot, military grade Chinese runway.

And speaking of rocks in the sea that U.S. and Chinese warships are now circling around, there is also Mischief Reef. This is a cautionary tale of what happens when America withdraws its Navy from Asia: When the monsoon season kept the Philippine Navy from its normal administrative patrols around Mischief Reef - and with the U.S. Navy evicted from Subic Bay naval base by the Philippines itself - Chinese naval forces surreptitiously slipped into this administrative void and erected several structures.

At that point, the Philippines could have attempted to intervene militarily to stop what its political leaders angrily denounced as a "creeping invasion." However, having seen what China had violently done to Vietnamese sailors and soldiers in the Battle of the Paracels in 1974 and again in the Johnson South Reef Massacre of 1988 - and without the U.S. to have its back - the out-gunned Philippines navy refused to engage with Chinese forces. In this way, the taking of Mischief Reef quickly became a fait accompli.

Lest anyone think this kind of revanchist behavior is ancient history, Beijing pulled off a similar salami slice with its taking of Scarborough Shoal from the Philippines in 2012. Here's the kicker: After this taking, the U.S. thought it had successfully mediated a resolution that required both China and the Philippines to withdraw from the area and peaceably negotiate. However, while the Philippines kept its part of the deal and withdrew its forces, China never left - a stunning example of bad faith bargaining that will certainly make it more difficult to resolve future disputes with Beijing through peaceful negotiations.

Here's the broader point of this sweep of Beijing's opportunistic history: While America has vacillated between distraction and disinterest when it comes to Asia, a Rising China has quietly seized the opportunity to seize territory and expand its influence and power - and thereby nudge history in its favor. The Asia-Pacific is, however, home to 50% of the world's population and likely more than 70% of future economic growth - and therefore a part of the world where America's economic and strategic future ultimately lays. As we prosecute the war on terrorism and do what we must to extinguish Al Qaeda and ISIS, this nation - and the presidential candidates that hope to lead it -must never lose sight of this essential truth.

Peter Navarro is a business professor at the University of California-Irvine and author of Crouching Tiger: What China's Militarism Means for the World (Prometheus Books). This blog post originally appeared in The National Interest and is reprinted with permission.