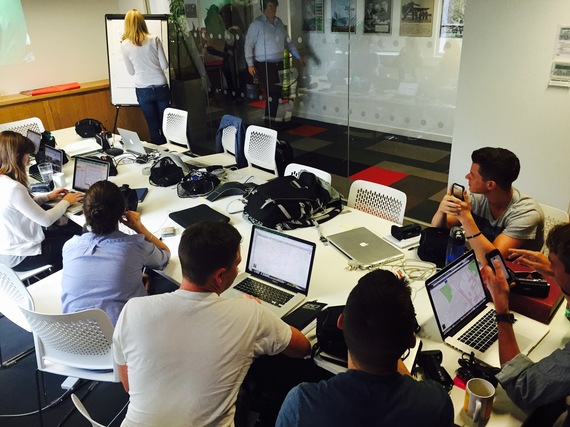 4 Days To Change Your Life

We all live in a place called Screenworld.

The average American now spends a mind-boggling 8.5 hours a day, every day, staring at screens. iPhone screens, computer screens, tablet screens, television screens, screens in elevators, screens in gas stations. What do you think you are doing now but watching a screen?

Screen watching has now become our number one activity, surpassing sports, work, eating and even sleep.

This is an entirely new event in human experience. Nothing like this has ever happened before, and it has happened with astonishing speed -- this transition to screenworld. Virtually every single human activity is now screen based, from entertainment to news to politics to buying things to personal relationships. Screens.

And screens, by their very nature, demand one thing: video. Screens were made for video. You can put text on screens -- you can put text on a TV cable channel, but no one will watch it -- although there were several attempts in the 1980s, none of them worked. Screens demand video and people crave video. It's a match made in... well, heaven or hell, but a match for sure.

As a result, as everything migrates to screens and Screenworld, video literacy becomes the order of the day. If you want to have a successful newspaper or magazine or political campaign or online store, for that matter, you have to be able to communicate in video. Video literacy is as essential to the arrival of the Internet and smartphones as print literacy was to the arrival of the printing press 500 years ago.

This week, we are busy in London training folks from two magazines -- Top Gear and BBC Good Foods -- to take them into video literacy. They are not alone. We have done many magazines and newspapers in the past, and there are many more in the pipeline. (Last week it was a major PR firm in London and LA). Video is the lingua franca of the 21st Century. It is the way everyone is going to communicate. And it is international.

Magazines are great places to work with because they are inherently creators of vast amounts of content -- until now, done almost exclusively in print. Taking their ability to find great stories and turning them into video, as well as print, simply, efficiently and quickly opens a whole new world for them and for their readers -- who are increasingly online viewers.

Video was once a sort of 'add on' for newspapers or magazines just moving online. It was often buried at the bottom of the page or in some link. That is over. More and more, video is becoming the dominant medium of the Internet, and any media company (or any company for that matter) that wants to remain relevant in Screenworld has got to learn to create video as quickly and as successfully as they do print.

And they can. A new generation of powerful yet inexpensive cameras and remarkably simple to use edit software now puts the power of video into everyone's hands. Just as you would never employ someone at a newspaper or magazine who could not write, no matter how smart or creative they were, in the near future the idea of employing someone who cannot deliver their work in video will be equally unthinkable.

Next month we will be offering an intensive 4-day bootcam in partnership with The Guardian newspaper in London. It is open to anyone who wants to take it, which makes it a rather unique opportunity. The people at BBC Good Food and Top Gear understand the necessity of embracing video in addition to their text and photography capabilities. It is clearly where the world is headed and they want to be there first.