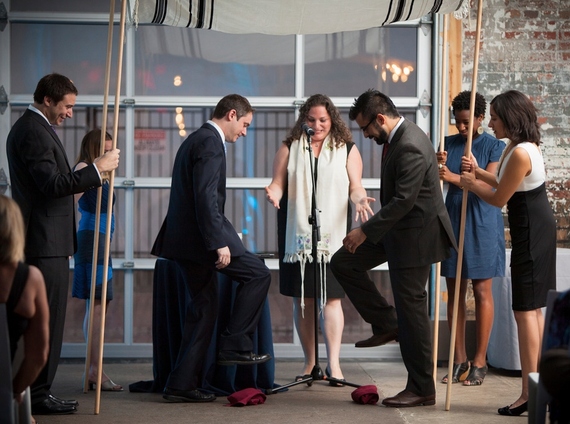 As the final Supreme Court showdown approaches, lingering resistance to marriage equality centers on the claim that affirming the freedom to marry for all Americans would somehow constitute an attack on religious liberty.

Once and for all: Nonsense. Double nonsense.

Allowing all couples to marry has zero impact on anybody's legally protected free exercise of religion. And the underlying assumption that there is one, uniform "religious" (by which many mean "Christian") definition of marriage is simply false. Mainstream U.S. religion is moving almost as quickly as society at large towards full embrace of equal dignity and legal equality for LGBT individuals and families.

Exhibit A: The raft of mainstream religious organizations and nearly 2000 individual clergy who signed on to the pro-equality friend of the court brief that my firm just filed in the Supreme Court. Millions of Americans now belong to denominations that accept -- and bless -- the relationships of same-sex couples. Marriage discrimination thus offends religious conscience as much as it serves it.

The legal basics of marriage equality and religion are not that complicated: The courts are addressing only civil marriage. No church will ever be forced to change its definition of marriage, just as civil authorities have no say over the hiring of clergy, the content of religious services, or other choices that lie at the heart of free exercise.

Problems arise only when religious organizations act in the commercial realm -- such as by operating a public catering hall -- or when business owners harbor religious qualms about serving gay people (or black people or Japanese people) in their restaurants, bakeries, entertainment venues, or other public accommodations. In these settings, civil rights laws trump personal preferences -- even those based on religious conviction. That's a consensus we came to as a society long ago. Have a religious objection to serving Mexicans or Mormons or interracial couples? Don't open a lunch counter.

Where public accommodation laws also protect LGBT individuals, the rule is the same. While some have been trying to enact special laws to permit anti-gay discrimination in the public sphere, these bills are likely to be defeated (among other reasons because they are bad for business) or struck down as unconstitutional.

That's not to say there can't be valid disputes, for example, over the definition of a "public accommodation." But such questions are governed by existing legal rules that courts know how to apply. These disputes already arise when businesses discriminate against gay people or couples, married or not. And gay people have been marrying in increasing numbers for a decade without any evidence of the predicted avalanche of disputes. Most people understand that if they open a public business they have to serve everybody.

The related suggestion that the freedom to marry violates some uniform "religious" definition of marriage is equally misguided. Mainstream U.S. religious organizations have been progressing for some time towards common ground in embracing same-sex couples and their relationships.

It is hardly surprising that traditionally liberal denominations like the United Church of Christ, the Unitarian Universalist Association, and Reform Judaism have long embraced full equality for same-sex couples. But the freedom to marry is now endorsed as well by the Episcopal Church, the Religious Society of Friends (Quakers), and both Conservative and Reconstructionist Judaism. Significantly, each of these faiths now embraces marriage equality not just as a civil legal matter but also, to varying extents, through their own religious doctrine and practice.

Other mainstream denominations, including the United Methodists, the Presbyterian Church (U.S.A.), and the Evangelical Lutheran Church, have been wrestling with these issues -- and the Presbyterians and Lutherans now permit individual congregations to bless the unions of same-sex couples. Even among faiths that remain staunchly opposed to recognizing same-sex relationships, the laity is often ahead of the leadership. For example, a 2013 poll showed that 57 percent of American Catholics supported marriage equality. And there are even stirrings for equality among Evangelicals.

Of course, under our system, religious views pro or con should have nothing to do with the legal definition of civil marriage. But this is about more than religion versus non-religion. Imposing a supposedly "religious" definition of marriage limited to different-sex couples would favor certain religious views over other religious views -- those of the many mainstream faiths that now embrace equality.

So don't let anybody tell you that marriage equality is a threat to religion. It is rather the exclusion of loving, committed couples from equal respect and dignity that offends decency and -- increasingly -- the mainstream of American religious practice.