In fact, I hate these imperialist symbols of brainwash and plunder so much, I am currently facing charges, along with 15 others, for burning the American flag at both national political conventions just a few weeks ago.

Night after night, fascist ghouls gathered at the Republican Convention. On July 20, their theme was "Make America Great Again."

That's the day I torched the American flag right outside the convention. 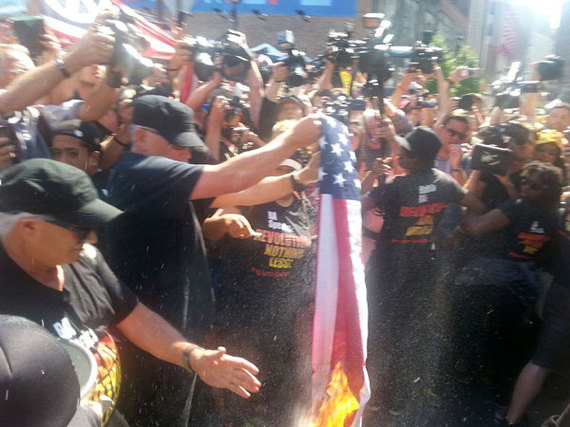 I burned the flag because all that America-first crap is toxic! "America first? It's always been first: at genocide, at slavery, exploitation, destruction of the environment, torture, coup d'états, invasions... we're standing here with the people of the world today!" That's what I said, and then I set fire to the flag. And I did this because I have always believed as Bob Avakian (BA), the leader of a movement for an actual revolution in this country, says "American lives are not more important than other people's lives" (a statement that should so obviously be seen as true, but completely conflicts with the way people in this country are indoctrinated to think).

For this, I and 15 others were assaulted by police, illegally arrested, and now face serious criminal charges. This is outrageous, it must be fought, and it reveals that the essence of what exists in America is not democracy but a dictatorship of a capitalist class and its state, willing to disregard its own laws and rights when it suffers political exposure.

Trust me, I know about the flag. Thirty-two years ago, I burned the American flag outside another Republican convention as Ronald Reagan -- that kind, avuncular backer of death squads in El Salvador and Guatemala and mercenaries in Nicaragua -- was being nominated for a second term. For that protest, I was arrested, tried, convicted and sentenced to a year in jail. I fought for five years until victory when the Supreme Court ruled that flag-burning is protected political speech. Today, same flag -- even worse nationalistic chauvinism.

Was America great when it carried out genocide of Native Americans? When the 7th Cavalry massacred Lakota Indians at Wounded Knee they did so carrying that flag. Was America great when it kidnapped and enslaved Africans, whipping, driving and raping them, tearing them from their families? Was America great during a century of Jim Crow segregation and lynch-mob terror? Is it great right NOW when its police are terrorizing, brutalizing and gunning down Black and Brown people -- Alton Sterling, Philando Castile, Tanisha Anderson, and Freddie Gray -- and the murderers never go to jail?! Is America great right NOW as the flag flies over hundreds of ICE detention facilities housing thousands of immigrants -- people forced to flee to the very country whose domination of their homelands has forced them on such a perilous journey to begin with? The flag is the brand for a global network of exploitation and wealth extraction and a military armada, CIA black sites and mass graves from My Lai to Fallujah.

I'm aware that seeing the American flag burn is a jarring sight for some. But there comes a time when people NEED to be jarred; you have to confront people, when they have been essentially drugged with this "America the Great" bullshit. And that's what we were doing by burning the flag in Cleveland and outside the Democratic Convention in Philly.

Then came the "reasonable" war criminals of the Democratic Convention insisting that "America is already great!" -- while their prisons, drone strikes, and world-wide exploitation crush the lives of millions and millions.

This country is both at one and the same time the United States of Atrocities and the United States of Amnesia. And so our burning the flag is a kind of ideological and political gingko biloba -- a very necessary medicine for people who have never known, or have known and have forgotten the truth about, the empire's crimes and atrocities. It is also good medicine for people all over the world and here, who live the horror that America delivers every day of their lives, who've never had the luxury of "forgetting" what this country does. I think for all those people this flag-burning was a big political and ideological shot of INTERNATIONALISM!

We Need to Overthrow the System

I burned the flag because it's wrong to close our eyes to the crimes this country is committing against people inside the U.S. and even more all over the world. But not only do we have to confront these crimes, we must act to stop them. Fundamentally, this is going to take an actual revolution.

Let me be very clear: By revolution, I don't mean electing a new face on the empire, I mean overthrowing the empire. People think this is not possible, but it is. Bob Avakian has spent decades developing a scientific approach and the necessary strategy to make the kind of revolution that can truly lead to the emancipation of all humanity. A world without empires,a world without rape, a world without murder by police or any of the rest of the terror against Black people in this country; a world where we are fit care-takers of the planet. It's not going to be easy, but it is the only realistic way.

The Revolutionary Communist Party (RCP) says, in a message from its Central Committee, it's "Time to Get Organized for an ACTUAL Revolution."

Yes, it's also jarring to find out that the same system that has lied to you about everything else important in the world has also lied about the possibility of humanity living a radically better way. But again, many more people have to be jarred if we're going to break out of the horrors that so many have grown accustomed to, and really bring about lasting liberation to all of humanity.

It is necessary for people to put themselves on the line against the crimes of this system. Kaepernick has done this in his way. I am doing this in a different way. What about you?

We Demand: Drop the Charges on Gregory "Joey" Johnson and the RNC16 Now!