It happened on a special day.

After the Republic Day celebrations, on October 29, Bülent Tezcan, the vice chairman of Turkey's main opposition party, CHP, was sitting at a dinner table together with some friends in Aydın, an Aegean city not far from İzmir.

While they were busy discussing politics, somebody rose up from a nearby table, approached him, drew a pistol while shouting and shot him in the leg, before running away.

Tezcan was lucky, according to the doctors. 'Had the bullet penetrated an inch closer to a main artery, we would lose him' a doctor said. 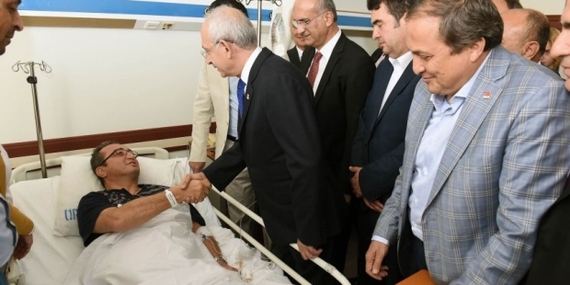 The attacker was caught hours later.

He told the police that he became very angry, and explained:

'He was speaking against our president. Then I remembered that he had been to the congress of the (Kurdish) HDP party. I told him that he should mind his tongue when speaking about our chief. He responded harshly and I shot him.' 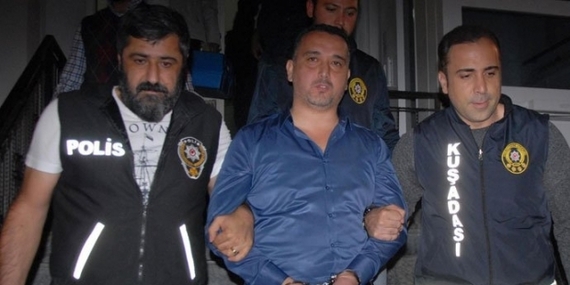 This incident came as no surprise to those who watch with growing concern the explosive polarisation which has been keeping Turkey in its tight grip for years now. Certainly, the failed coup attempt, causing deaths of 240 civilians added to the rage, as demonisation of civilian opposition intensified.

Today's Turkey is without a doubt a powder keg, reminiscent of Yugoslavia, which because of Milosevic's divisive nationalist drive, disintegrated after a blood bath.

One of the most worrisome aspects of Turkey today is the concrete signals of individual armament as part of a fierce partisanship with the AKP at its epicentre. 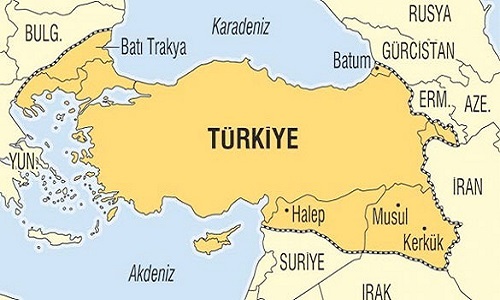 As Erdoğan raised the decibel level of his speeches again lately, questioning Turkey's current borders, and the validity of Lausanne Treaty (which as a foundational document established modern Turkey) signed and sealed in 1923, new (or old) maps were visible in Turkish TV channels and newspapers, showing Mosul and northeastern part of Greece, beyond Thessaloniki, as the 'Greater Turkey'.

Irredentism, and revanchism that comes along with it, is on the table. No matter what the intentions behind claims of 'revenge of history', whipping up the Turkish masses is a fearsome fact.

So, no surprise, then, observers draw parallels between the German resentment of Versailles Treaty, and the rise of an aggressive nationalism, that can't wait to go to war. The horrifying reading of William Sheridan Allen's famous study of Northeim, its evolution as a microcosmos before the WW2, titled 'The Nazi Seizure of Power' explains the most of it. The most striking element was how quickly everything went, before the nightmare began. Needless to say, history insists on repeating itself.

The ostrich-like European leaders and the EU Commission may refuse to admit it, many of them mesmerized by the illusion of the realpolitik, but the reality in Turkish ground is filled with similar, worrisome signs, piling up by every day that passes.

Irredentism may be a slowly brewing fact, but another most recent development should be paid the outmost attention: the announcement and preparations for the armament of the the AKP members en masse.

Turning the ruling party into an armed force had already landed on Turkish agenda, some days after the botched coup, which took place July 15.

Under the slogan 'never again!' some AKP officials said, that 'civilian preparedness' was necessary to resist new coup attempts. One of them was Şeref Malkoç, a Chief Advisor of President Erdoğan who announced that 'licenced firearms should be distributed to the people.'

Ever since then, such calls echoed strongly. A swift support came from the militia-like organisation, 'Ottoman Units 1453' (Osmanlı Ocakları 1453) - whose date refers to the conquest of Istanbul - that launched the hashtag 'AKArmament' (#AKSilahlanma) on social media.

'This one is a call for all the brothers. Arm yourselves for the motherland, for the flag and for Erdoğan.' At a later call, he added: 'Erdoğan is the motherland; he means the flag for us. We will die, and kill, for Erdoğan'.

Soon after, the hashtag topped the social media traffic. Messages like 'AKYouth and AKMilitia is getting ready. We stand ready to fight till the last drop of our blood. Matryrdom is our holy goal!' or 'We are ready REIS, tell us to hit, and we shall. Tell us to die and we shall. We shall enter Aleppo and Mosul!' were in intense circulation.

(The term 'REIS', could be translated as 'the Chief', falling slighly short, or not, of 'Führer'.) 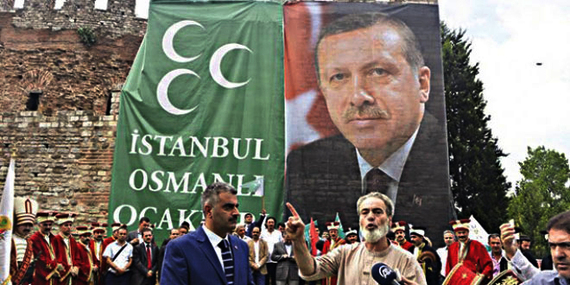 'Ottoman Units' is a relatively new organisation. It was formed in 2009 and was known by its attack and vandalisation of the large-circulation daily, Hürriyet, in the summer of 2015, following the elections in June 7.

The organisation declared its objectives as, 'Raising religious generations, reviving a lifestyle based on the teachings of Kuran, working for the re-establishment of Khalifat, re-opening of Haghia Sophia in Istanbul as a mosque' etc etc.

The pro-government columns have also been busy to endorse the trend. Abdullah Şanlıdağ, a columnist with the fiercely anti-semitic, anti-west daily, Yeni Akit, wrote:

'Don't fear this nation of ours, don't. They know exactly who to kill.'

Just an example of many, almost copy-paste like messages, in circulation.

But, these public rants have not remained as outbursts, symbolizing a new trend of political hooliganism. Some days ago, it was transferred to the official rhetoric, and developed into an AKP pledge. 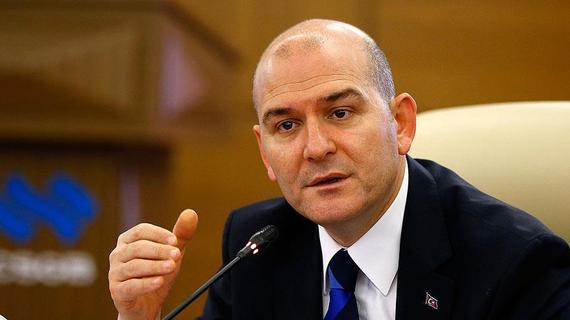 It was the newly appointed Minister of Interior, Süleyman Soylu, who broke the news. At a large meeting of the ruling party, in the Anatolian city of Afyon, he said: 'We shall deliver each and every official of our party. We shall also equip them with security guards. We will also see to it that they are protected by long-range weapons.'

The context of his pledge was, the increasing attacks on the local AKP figures in the mainly Kurdish eastern and southeastern provinces. Most recently, in a series of attacks, several of them were killed or wounded.

The PKK also threatened the 'trustees' appointed by the government to take over the administration of the pro-Kurdish HDP municipalities, in a constantly rising tension. The most recent seizure of Diyarbakır municipality adds geometrically to the tension.

While the result of such mutual armament in an explosive region is only left to imagination, there were other official statements from elsewhere that confirmed the AKP-launched national trend.

In a recent local TV appearance, the governor of the northeastern Black Sea town, Rize, said that licensed weapons were delivered in large numbers to those who 'donate money'.

Comparing his time as governor in an Aegean city of Manisa, Erdoğan Bektaş said:

'I delivered five times more weapons in three months that I had in Manisa in two years.' He added that he would personally provide firearms to people, 'should the coup attempt happen again'.

Such statements, not denied so far, indeed reveal a nation-wide pattern. In a most recent news story, daily Cumhuriyet wrote that the government was planning to issue a new emergency decree that will enhance the local governors' authority to approve licenses.

But it doesn't end there.

In a more spectacular development, Turkey's most powerful state institution - which seems top have taken over the role as the chief tutelary body, from the military - the Directorate of Religious Affairs (Diyanet), declared that it had launched a project to establish 'Youth Units' in the mosques across Turkey. It was a high-level representative of Diyanet, Yaşar Yiğit, whho broke the news. 'At the first stage we are now done with the infrastructure in 1.500 mosques' he said.

From every vantage point, it is clear how the pattern is set.

There were already reports, in independent newspapers such as Cumhuriyet, that large chunks of the 'private security companies' were affiliated with the AKP. The preparations of armament of AKP-loyal citizens and the politization of the mosque networks in micro-distric level, combined, depicts a new, worrisome picture. Add to this repeated calls by President Erdoğan to the elected local neighborhood administrators (muhtar) that they should inform of all 'subversive' activities to the 'center', and the details become even clearer.

Two days ago, addressing hundreds of 'muhtars' in the 'palace', Erdoğan said:

'I am now the chief muhtar, who controls everything.'

With polarisation and social divisions even sharper after July 15 coup attempt, Turkey is not farther away from a civil war scenario. It is a country where the fight for raw power is intensifying, and not otherwise.

'Would it be wrong if we say that the AKP is building its own army?' asked politely a colleague, recently in Cumhuriyet.

He is not alone in his fear.

'What if somebody now comes out and calls for an armament for Kemal Kılıçdaroğlu (leader of the main opposition, CHP)? Where will we end? To call for armament is to propagate for civil war. To whip up unarmed people to armament is a crime. Bandits are running loose in the streets in broad daylight. If an election does not produce a 'desired' result, will these people seize control of the country?'

The data speaks for itself. A parliamentary commission last year issued information that, as of the end of 2013, there were a total of roughly 20 million firearms, of which 85 % were unlicensed. Turkey ranks 14th among 178 countries in individual armament, and in the past years it has noted an increase of more than 50 %.