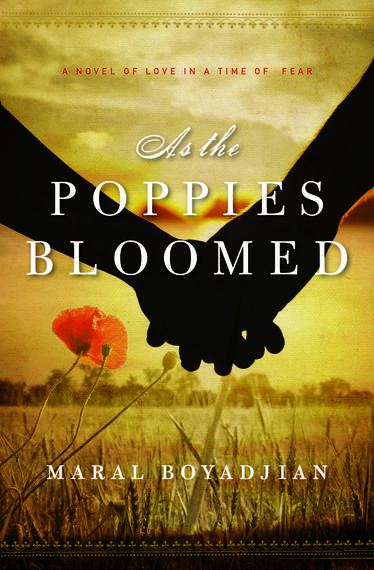 Maral Boyadjian's debut novel, As the Poppies Bloomed is a fictionalized account of her family's experience during the Armenian Genocide of 1915, which decimated the families of all four of the author's grandparents. That is perhaps why this lovingly written and sometimes lyrical account of the events in the small village of Salor seem so real--at times the characters almost jump off the page at the reader. At others, the narrative has the feel of a folk tale. The careful attention to anthropological details such as village traditions or the shapes and materials of rugs, plates, and all manner of daily utensils, is unique as well; "Today, Anno would join the other woman and children of different households to winnow the grain. The wheat would be lain thinly on large, clean cloths and hit with sticks to separate it from the husks. Then, with shovels, they would toss the grain and chaff into the air so that the chaff would fly off and the grain fall neatly to the cloth." Though the book does not carry quite the stylistic or philosophical weight of Raffi's Fool, a classic written in Armenian, I was reminded of it at times, as I read through to its inevitable conclusion.

It's 1913 when the book opens in the Kars Region in the small village of Salor. The Armenians have already been thinned out after the 1896 massacres led by Adbul Hamid and by constant raids by Kurds and Turks alike. As the indigenous people of Western Armenia/Anatolia and the most industrious people there along with the Greeks, the Armenians have long since abandoned the warrior and nomadic traditions that many Kurds and Turks still thrive on, and they are ill-prepared to defend themselves. As Christians in a Muslim land, they cannot bear arms except on wedding days, and so they must resort to hiding a musket here, a hand gun there. It is little comfort or defense against the Ottoman army: "But, as one fedayee or freedom fighter observes, 'How will a tiny band of men such as ourselves, with nothing but the guns we can smuggle, protect our people from the whole Turkish army?'" The obvious answer is that they can't--and hence the tragedy that is about to befall the village is doubly alarming.

As the Poppies Bloom is a love story as well: as the story opens, fifteen year-old Anno hides in a well where she has agreed to rendez-vous with her young lover Daron. In an age where unions are arranged and families marry off their children to other families that they are close to, it seems that this wedding may never happen. It is against this backdrop that perhaps the most important message in Boyadjian's novel emerges: that despite all odds and the most hideous persecutions, love may yet win out...and that the descendants of these brave mountain people will somehow manage to survive the most terrible massacres that history has yet visited on any one ethnic group. As the story unfolds, the villagers of Salor try to organize a defense against the Ottoman army. Some of the protagonists survive, others do not-the sometimes abrupt details that occur within an otherwise predictable set of linear events are deftly accomplished for the most part . The coda to the novel, which takes place with Daron and his Southern Californian family some sixty years later can either be read or ignored--I am still not sure if it adds or takes away from the novel's overall strength.

Although Boyadjian uses a good sense of reserve when describing some of the massacres, I must say that I found it almost unbearable to read of the killings, rapes, castrations and other horrors visited on these poor, defenseless villagers. The fact that Boyadjian, some four generations later, was able to write such a stirring novel from the safety of her Southern California home, provides some indication of the fierce will that the characters in her novel displayed when confronted with the most difficult of conditions. Poppies is a story of love, loss and in the end salvation--the best type of story we have to remind ourselves of some of the worst, and best, aspects of the human condition.