Five years ago when it was created, the UN Commission for Digital Development stated that "the digital divide continues to be a development divide that must quickly be bridged." Since then, huge progress has been made in closing the digital divides in the adoption of information and communication technologies (ICTs), particularly telephones and the Internet. A new potential digital divide may be emerging, however, in the adoption of machine-to-machine (M2M) deployment and services, a key element in the Internet of Things and the Internet of Everything.

According to Cisco's 2015 Visual Networking Index (VNI), we now stand at a clear digital tipping point - by 2019, the number of people connecting to Internet will be 3.9 billion, reaching over 51% of the global population. As over one billion additional people connect to the Internet over the next five years, over 10.2 billion new devices (smartphones, tablets, sensors, etc.) will come online at the same time, growing from 14.2 billion in 2014 to 24.4 billion in 2019; and 10.5 billion of these will be M2M. 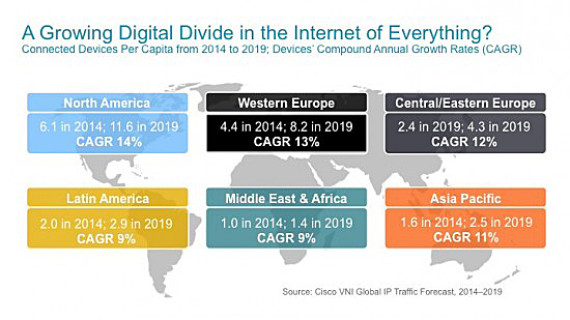 The contrast across regions in M2M devices is even more stark. While globally, over 43% of all devices in 2019 will be M2M, advanced regions of the world are ahead of the curve. In the UK, M2M devices will account for 48% of all devices by 2019. In Australia the share will be 54%; the US it will be 58%; Japan 68% and in Korea, 72%. By comparison, in most developing countries the number of M2M devices are still at a nascent level: In India, only 13% of all devices by 2019 will be M2M, across Africa and Middle East, the share will be only 17%, in South Africa it will 22%; Brazil and Mexico will be 32%.

Why does this matter? While developing countries are catching up in basic ICT penetration, this growing gap in connected devices and M2M connections may point to big differences in how societies are utilizing, and benefitting from, the Internet and the next generation of the digital transition. For example, network effects and externalities that multiply the impacts of ICTs require minimum adoption thresholds before those impacts begin to materialize, and the greater the intensity of ICT use, the greater the impacts on economic growth (even beyond saturation levels of penetration).

It is important to recognize the global success in advancing the adoption of ICTs, particularly telephones and the Internet, around the world. Private sector telecom investment supported by smart government policies fostered infrastructure development to the extent that now over 90% of the world's population is covered by mobile telephone signals.

We must continue the push for greater access and adoption of ICTs among lower-income groups to further accelerate income gains at the base of the economic pyramid. Policy action should focus on preventing and bridging this emerging digital divide in M2M and connected devices, achieved through partnership and private sector investment, enabled by conducive business environments and crafted by pro-innovation and pro-investment government policies. As the 2015 State of Broadband report highlights, more needs to be done to accelerate the adoption of ICTs and total connected devices and close the gaps between developed and developing countries, as well as high-income and low-income populations.