I returned from my shortest trip to Haiti last week, back to DeKalb, Illinois, an agribusiness hub, hosting Nestle and Monsanto processing plants. Most cornfields have been harvested. The Cubs won the world series for the first time in 108 years. Another of Illinois' home grown, Hillary Rodham Clinton, has an 84% likelihood of being elected the U.S. first female president in a couple of days, per the New York Times.

Meanwhile Haiti is all but forgotten.

A month ago, Hurricane Matthew ripped through Haiti. News from the assessment was slow to arrive.

In terms of loss of human life, this disaster was thankfully far less deadly than the earthquake on January 12, 2010, almost seven years ago now.

However, in terms of material damage - over 80 percent of houses destroyed, livestock, a season's crops, not to mention trees dead - Hurricane Matthew is proving very devastating. This is to say nothing of urgent public health concerns like hunger and a spike in cholera, a disease U.N. troops brought to Haiti in 2010.

Why has this current catastrophe been buried?

Is it that broken buildings and bloody bodies make for a better story?

Is it because unlike the earthquake, the extent of the damage wasn't fully known at the outset?

Is it that the political winds, about grabbing women by the genitals or official state emails sent over private email servers, proved even more powerful than the category 4 storm?

Is it that people andeyò - literally outside, in rural areas - and their lives don't matter? The 2010 earthquake killed foreign troops and aid workers just as it did Haitian people, NGO and governmental professionals as well as residents of shantytowns. This time around, the deaths were Haitian, and rural at that.

Is it that "Haiti" is being blamed for the missteps, failures, disappointments, and secondary damage ("Fatal Assistance" or "humanitarian aftershocks") from the 2010 humanitarian response?

Or is it all of the above?

Regardless of the reason, coverage of this storm and its aftermath have been underwhelming. At $120 million, the current U.N. Flash Appeal for Haiti was a small fraction of 2010 pledges, $16 billion. Even so, 86 percent of the current appeal for food aid remained unfunded as of November 4, a month after the storm.

This lack of urgency is deadly. The real disaster -- chronic hunger, food insecurity, and dependency -- is yet to come.

Along with four MA students from the State University of Haiti who had conducted research in the Grand'Anse and South provinces, I visited four fieldsites in Matthew's wake last weekend.

What struck us all was the sheer scale of the destruction. Three weeks following the hurricane and trees were still barren. Over and again people likened the damage to a forest fire. This wasn't just one isolated area but the entire region of the country. We drove for four hours with no end in sight.

Another particularly vivid recurring image was of houses fallen to the ground, with only the ancestral tombs standing. Some families who had enough means to build concrete houses had begun rebuilding their tin roofs. On his third trip since the hurricane, student Verdy Renois pointed to this as a hopeful sign of progress.

Another common theme in our conversations with residents and local officials was the lack of capacity or interest from the central government in Port-au-Prince and international agencies. Community organizations and elected mayors alike have been working on overdrive to attempt to meet residents' needs. But time and again they reported frustration at the lack of support.

The Ministry of Education declared that on November 7 schools must reopen. This would be a good goal, said Pestel mayor Evil Lavilette, if the Ministry had provided local governments with necessary support. Of the 50 private schools in Pestel, the Grand'Anse's second largest town, only one was functional.

Fortune Odeve, a community organizer in the south coast Port-Salut, coordinating civil society response to the hurricane, was frustrated with the central government, particularly the lack of planning. "People in greatest need are not the ones receiving aid." Water and electricity had not yet been restored. Electricity poles had not even been pulled off the ground in many places along the road.

The lack of concern, to Odeve, was particularly conspicuous compared to the earthquake response, when 630,000 Port-au-Prince residents returned to their hometowns, where their families took them in. "It's as if we people living outside [Port-au-Prince] aren't people."

And this is in Port-Salut, hometown of former President Jean-Bertrand Aristide, known also for its seaside resorts, frequented by U.N. troops, foreign aid workers, and Haitian professionals alike. Port-Salut was one of the first places to have journalists following the hurricane. Images we saw three weeks after were not much different. 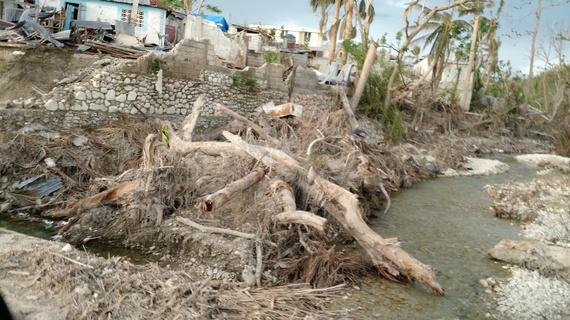 Other places fared much worse. We heard from almost everyone that people who live away from the main road are literally invisible.

One result of this incapacity, centralization, and slow response is desperation. Some individuals have taken it upon themselves to take what they can. As former Abricots mayor and founder of AMAGA, the Grand Anse Mayor's Association, Jean-Claude Fignole noted, "While I don't condone it, I understand why. People are frustrated with the pace and the amount of aid."

This story, including of a boy being gunned down by police, risks being understood out of context, piled on top of already negative preconceptions about Haitian people.

This is one result of the centralization in Port-au-Prince, begun during the 1915-34 U.S. occupation and accelerated during the imposition of neoliberal policies by the U.S. government and the World Bank.

It is also a result of the relative lack of aid, itself reflecting limited funds being sent.

While this is a matter of grave concern, there was universal agreement that the biggest priority is to support farmers in the Grand'Anse and the South to get back to their fields. The "Grand South" was one of Haiti's largest "breadbaskets," helping Haiti feed itself. The loss to not just the region but the country is immense.

For its part, the Lambi Fund of Haiti is working with 27 partner organizations in the South province to clean the canals, clear the fields, and plant these crops.

Many people discussed three-month yielding grains and tubers. Agronomist Eliassaint Magloire, of the Organization for Rehabilitation of the Environment (ORE) outlined the urgent priority for local seeds, adapted to the climate and resistant to common diseases. ORE is launching a "seed brigade."

Indeed, if the Cubs can win, anything seems possible. If even a fraction of people who attended Friday's rally in Chicago knew the full extent of what happening in Haiti, or generally understood that our world agricultural system is intertwined, I truly believe that Haitian farmers can sow their seeds and be on the road to food sovereignty. Unlike baseball's most beloved losers, I fear that Haitian people don't have another chance at bat.