(RNS) Chances are you’ll see a bunch of folks walking around with schmutz on their foreheads this Wednesday (Feb. 18). The ‘Splainer asks what having a dirty forehead has to do with being a Christian and why this ritual is gaining in popularity.

Q: Excuse me, but why do you have dirt on your forehead?

A: Wednesday is Ash Wednesday, the day many Christians mark as the first day of Lent, the time of reflection and penitence leading up to Easter Sunday. Clergy all over the world dispense ashes, usually made by burning the palm fronds distributed on last year’s Palm Sunday, making the sign of the cross on the bowed foreheads before them. As they “impose” or “dispense” the ashes, the pastor or priest reminds each Christian of Genesis 3:19: “For dust you are and to dust you shall return.”

Q: Well, that’s cheerful. Why would anyone want to start a workday on such a downer?

A: It isn’t intended to be a downer. It’s supposed to be a reminder that our lives are short and we must live them to the fullest. OK, maybe it’s a little bit of a downer — that verse from Genesis is what God said to Adam and Eve when he expelled them from the Garden of Eden for their sins. But there’s a big party the night before Ash Wednesday. That’s Mardi Gras, or “Fat Tuesday,” a secular observance that evolved out of “Shrove Tuesday,” the last hurrah – usually marked by eating of pancakes or other sinfully sweet foods – before the solemnity and penance of Lent set in.

Q: OK, so don’t invite me over for dinner until Lent is over in 40 days.

A: Fun fact: Lent is actually longer than 40 days. There are 46 days between Ash Wednesday and Easter, but most churches don’t count the Sundays as part of Lent.

A: Not anymore. It used to be true that Catholics made up the lion’s share of people celebrating Ash Wednesday. But today, most “liturgical churches” — those with a regular, calendar-based liturgy, or set of rituals and observances — mark the day, including Methodists, Episcopalians, Presbyterians, Lutherans and other Protestants. Some evangelicals are even beginning to get into the spirit as Baptist churches in Alabama, Texas and Arkansas have smeared some ash in recent years. But the majority of evangelical and Pentecostal Christians don’t observe the day, and neither do Mormons.

Q: Do you have to go to church before or after work to get your ashes?

A: Not anymore! Many churches, ministries and clergy offer “ashes to go,” which can range from dispensing ashes on subway and train platforms, on street corners and other urban crossroads. Some enterprising Christians even offer ashes in a drive-thru.

Q: I don’t remember reading about Ash Wednesday in the Bible. Where did the practice come from?

A: That’s true; there is no mention of Ash Wednesday in the Bible. But there is a tradition of donning ashes as a sign of penitence that predates Jesus. In the Old Testament, Job repents “in dust and ashes,” and there are other associations of ashes and repentance in Esther, Samuel, Isaiah and Jeremiah. By the 10th century, the monk Aelfric tied the practice, which dates to the eighth century, to the period before Easter, writing, “Now let us do this little at the beginning of our Lent that we strew ashes upon our heads to signify that we ought to repent of our sins during the Lenten fast.” By the 11th century, the practice was widespread throughout the church — until Martin Luther, the Protestant reformer, threw the practice out in the 16th century because it was not biblically based. There’s no Lent in the Bible, either, though many Christians see it as an imitation of the 40 days Jesus spent fasting and battling with Satan in the desert.

Q: When can you wash the dirt off your face?

A: No one is required to keep the ashes on his or her face after the ritual. But some Christians choose to, perhaps as a reminder to themselves that they are mortal and fallible, while others may choose to leave them on as a witness to their faith in the hope others will ask about them and open a door to sharing their faith. 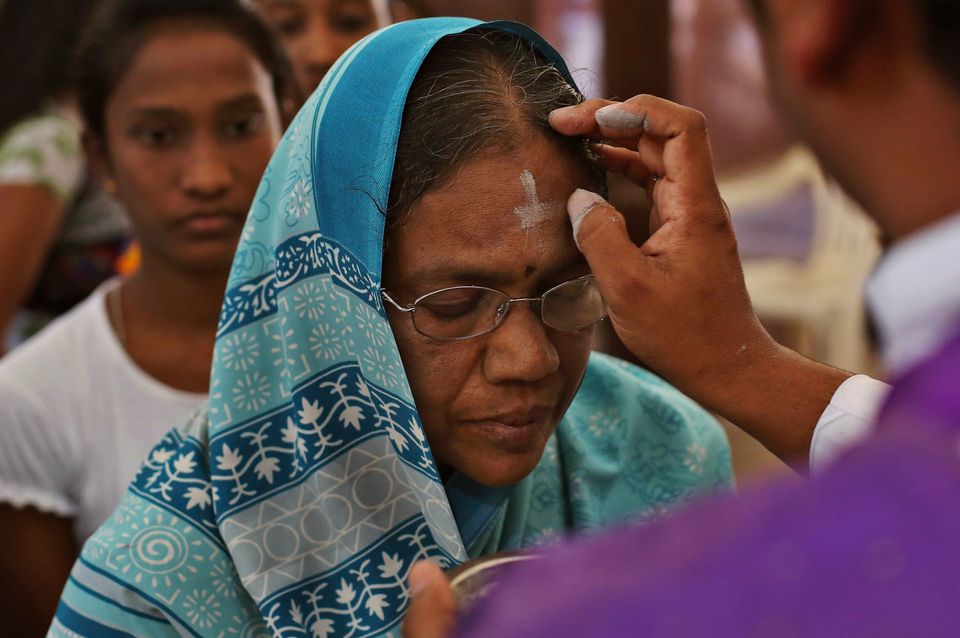 1 / 12
An Indian Catholic priest marks cross symbol on the forehead of devotees during an Ash Wednesday service at the St. Joseph Cathedral in Hyderabad, India, Wednesday, Feb. 18, 2015.
ASSOCIATED PRESS