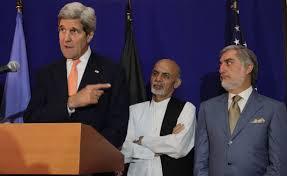 It has almost been a year since Afghan president Ashraf Ghani and Afghan chief executive Abdullah Abdullah have been in power. Contrary to the rosy pictures painted at the time, progress on many fronts has been dismal at best. To understand the root cause of the government of "national disunity," it is helpful to recap what transpired at its formation in 2014.

Mr. Ghani is an ethnic Pashtun, the largest ethnic group in Afghanistan. He had to ally himself with Rasheed Dostom, a notorious Uzbek warlord from the north, to compensate for a shortfall of Pashtun votes. If Afghanistan is divided along ethnic and tribal fault lines and if the Pashtuns are the largest group, why did Ashraf Ghani need Dostom's support? The reason is that many Pashtuns believe that they have been marginalized and that the international community's intervention in Afghanistan conspired with the Northern Alliance against them. The Taliban are mostly Pashtuns. The Northern Alliance is mostly Tajik, but at times is in an uneasy coalition with Uzbeks and Hazaras as well. As a result Pashtuns do not participate in the electoral process, which is also grossly flawed. The presidential election of 2014 was mired by accusations of fraud, with both Ghani and Abdullah pointing fingers at each other. Abdullah went so far as to threaten the stability of the government. To prevent a potentially serious situation the US Secretary of State John Kerry repeatedly intervened to bring the warring parties together. The result was the formation of the so called Government of Unity which recognized Mr. Ghani as the president and appointing Mr. Abdullah as the chief executive, a position which does not exist in the country's constitution.

Although the uneasy coexistence between the two men and their allies is still alive, the accomplishments remain dismal. One of Mr. Ghani's first acts was to fire most high ranking government officials. As bad as those officials may have been, filling the posts from a fractured, incompetent and politically connected shallow pool proved very difficult. He had no choice but to have the fired personnel stay on as caretakers. A good example is the appointment of the Masoom Stanekzai to the very important post of Minister of Defense. The Afghan parliament did not approve his appointment and Mr. Stanekzai continues to head the ministry as the caretaker.

Despite the continued support of NATO in the form of mission Resolute Support to strengthen the Afghan National Security Forces (ANSF), there is little sign of the ANSF being capable of fighting the Taliban insurgency and other groups affiliated with ISIS. The shameful, criminal, overt and rampant sexual abuse of children by certain elements of ANSF was once again recently publicized. Mr. Ghani became very irate and vowed that he would crack down. I don't doubt his sincerity, but like many other promises this one will go unfulfilled because he does not have a robust mechanism to do it. ANSF members who perpetrate these unspeakable acts against children are mostly members of the militias of the former warlords. These people are responsible for the creation and continuation of the culture of impunity. This is one of the reasons that the powerless rank and file Afghan turns to Taliban when his child is abused as there is no recourse for him but the Taliban.

There is no wonder why a corrupt and morally bankrupt ANSF cannot successfully face the insurgency despite the efforts of the US and the international community with billions of dollars and shedding of blood not to mention the great sacrifice of the poor Afghan people. The ANSF has suffered increased and repeated humiliations this year in Helmand and other areas. But the most important setback to date came on Monday September 28, 2015 when the Taliban insurgency, in a surprise attack, captured Kunduz, which is one the most important cities in the north. The loss of Kunduz, Afghanistan's fifth largest city and agriculturally one of the richest, is a very significant blow to Afghanistan and its national government of "disunity." Kunduz is also located on an artery connecting the capital Kabul to the rest of the Northern provinces. Additionally it shares a border with Tajikistan. With the Taliban in control, one of the important trading routes of landlocked Afghanistan to the outside world is no more. Whether the Afghan government will be able to reverse this loss remains to be seen.

Another reason the fall of Kunduz is significant is that although there are Pashtun pockets in Kunduz, the majority are Tajiks. It shows that the Taliban are not only strong in their traditional backyard of South and East, but they can take over a large city elsewhere in the country.

The disaccord between Messrs. Ghani and Abdullah is not limited to the failure to fill the vacant government positions. It must spill to other social, political and governance aspects of the country to the detriment of Afghans, the US and others who have been trying to bring stability and an eventual peace to the war torn country.