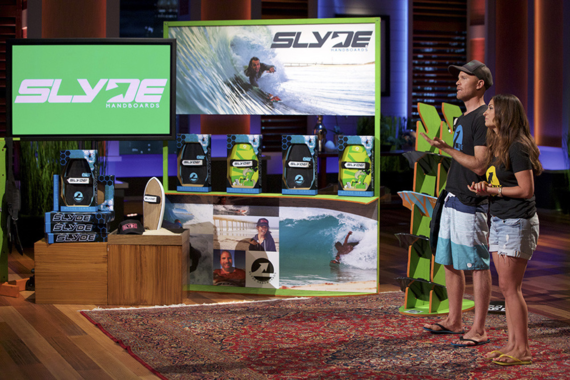 In a one-bedroom apartment in Dana Point, California, Steve and Angela Watts filmed a pitch, hoping to secure placement on ABC's hit series Shark Tank for their bodysurfing product Slyde Handboards. This was the third time they had applied to the show, and they were desperate to finally attract investors.

The Slyde Handboard is a small, lightweight surfboard worn on the hand. According to the inventors, it allows bodysurfers to easily change direction and skim the waves without having to carry around a cumbersome boogie board.

In a pool of nearly 50,000 applicants, "Unless you have something that sticks out phenomenally, you really do have to sort of make yourself known. The Shark Tank recruiters told us, 'Well, come back next year,' for the second time, so we did and that was when we got our break," said co-founder Angela Watts.

They were featured, with Ashton Kutcher, on Season 7. It was the first time this season that Kutcher, a celebrity guest shark, had appeared on the show's investment panel.

The couple requested $200,000 for 15% equity, and their brand caught the attention of multiple sharks.

Though the couple managed to maintain poker faces during the pitch, they were giddy with excitement. "The best way I can describe it is a bit like bungee jumping for forty-five minutes, or leap standing on the edge of that wave of bungee jumping, because the adrenaline rush you experience is crazy," said Steve Watts.

While Lori Greiner said the brand was cool, she opted out and left the floor open to other sharks. Although he hadn't made money with a previous similar venture, and was unable to see their products as an add-on project to his existing paddleboard company, Robert Herjavec matched their initial ask of $200,000 for 15% equity.

"Mr. Wonderful," Kevin O' Leary, complimented the two on investing their wedding savings in the company, but said their numbers were too small. He originally went out, but changed his mind, offering $200,000 for 15% as well.

Kutcher said because he has zero experience getting products to market, he needed another shark. However, he said his online distribution channel could help the marketing operation, utilizing a pipeline that includes direct-to-consumer marketing and targeting demographics on Facebook.

Mark Cuban then jumped in with him, offering help in the distribution category and even seeing that it was a potential match for an existing company in which he has equity, Tower Paddle Boards, which came into Shark Tank with $40,000 in sales, and is expected to bring in 8 to 10 million dollars this year.

"Their products are night and day. That's why they can partner. People want authentic products from authentic companies," said Cuban in an email interview.

Originally, Cuban and Kutcher proposed 25% equity for $200,000. After negotiating several times, the couple accepted an offer of $200,000 for 22% equity stake of the company.

"We would have taken the deal at 25%, but you don't want them to know that, so we had to negotiate a bit. You have to put on a straight face, because it really is somebody basically saying, 'I believe in you this much, so I am willing to give you $200,000.' Even if it's just $10, it shows they believe in you," said Steve and Angela Watts.

The idea for the handboard came from Steve Watts' lifetime passion of riding waves during the hot South African days in Cape Town during his summer breaks, where he would try out various wave-riding apparatuses. "We could try to find anything we could ride a wave with, from broken surfboards to Frisbees, even our flip-flops, but our favorite was the fast-food tray," he said in their opening presentation on Shark Tank.

With a desire to enhance his bodysurfing experience, he used his background in product design and began working with people who had 25-30 years of experience in the shaping industry in South Africa. Thus the Slyde Handboard was born.

Steve Watts founded the company in 2010 in Venice Beach and worked locally from his garage. After bringing his wife on board in 2013, she quit her job and devoted full time to the company, bringing in more than $356,000 in revenue since the opening of the business.

Previous fundraising campaigns include a successful Kickstarter in 2014 for another product, Slide Phish, which raised nearly $22,200. Another $10,000 was invested from what Angela's mother had saved for the couple's wedding. "We almost got married in Vegas, and when we got engaged, my mom said she had a present for us, which was $10,000 she had saved. After paying a deposit and picking our wedding date, we ran out of money for Slyde. We couldn't afford products. Our credit cards are maxed out. We had borrowed money from Steve's parents already and his brother, so we were met with our last option. Mom, we need your wedding money," said Angela.

Their gamble paid off. Currently, with products retailing between $169 and $199, they did more sales in 24 hours than any full month after airing on Shark Tank, and since then the couple has moved Slyde Handboards to Orange County to be closer to the heart of the surfing industry.