After Ashton Kutcher's Facebook lament about the lack of diaper changing tables in men's restrooms went viral, the actor decided to make a more proactive move. Kutcher teamed up with Change.org to create a petition asking Target and Costco to "provide universally accessible changing tables in their stores."

Sharing the petition on his Facebook page, the actor wrote, "It seems this idea of diaper changing stations has struck a chord. It's a pet peeve of mine when people just complain about s--t and don't do anything to improve their condition. So lets do something. In for equality? Pass it on - ‪#‎LeanInTogether"

The petition quickly attracted support, reaching over 50,000 signatures in less than a week. As of Wednesday morning, it's just shy of 75,000 signatures. Kutcher's letter on Change.org explains the choice to single out Target and Costco, as "companies that honor diversity, support families, and provide great services to kids of all ages." He writes, "As leaders in their industry, they can initiate a company-wide policy to provide universally accessible changing tables in their stores." 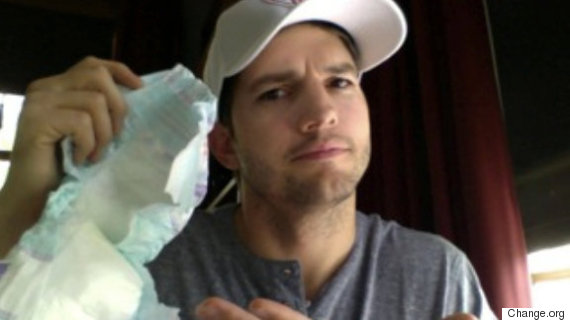 In an interview with his website A Plus, Kutcher explained why he's become so invested in this cause. "I would like my daughter to experience a world where gender doesn't dictate one's responsibility or limit one's opportunity," he said, adding, "Having changing tables in men's rooms is just a tiny step in the process of rectifying legacy gender discrimination. Men who are aware of this bias want to participate equally in the child care process and our society should support that. It's time to get our hands dirty."

Kutcher's petition to private businesses comes six months after California Governor Jerry Brown vetoed the Potty Parity For Parents Act bills, which would have required that facilities with changing tables in women's restrooms also provide them in men's restrooms and that newly constructed buildings have at least one changing station that's accessible to both women and men.

"At a time when so many have raised concerns about the number of regulations in California, I believe it would be more prudent to leave the matter of diaper changing stations to the private sector," Brown wrote in his veto messages, adding, "This may be a good business practice, but not one that I am inclined to legislate."

Though the veto was disappointing to the potty parity campaign's strongest supporters -- like dad blogger Doyin Richards and Sen. Ricardo Lara (D) -- they have not ceased working toward gender equality for parents. And the lack of legislation makes Kutcher's petition even more pressing.

So far, it's clear that the petition is not for naught. Shortly after the it went live, a Target representative issued this response to Kutcher:

Hi Ashton,
We appreciate the interest. As you've noted, at Target we are absolutely committed to creating a family-friendly environment and accommodating the needs of our guests. For the convenience of all of our guests, we have made changing tables a standard feature in both our men’s and women’s restrooms for more than 25 years. In addition, as we build new stores, we place changing tables in our women's, men's and family restrooms. In the event a changing table is unavailable, we encourage our guests to notify a team member and we will be happy to offer an alternative private location to meet their needs.
Molly Snyder
Target Public Relations

Though Costco has yet to respond publicly or to The Huffington Post, hopefully Target's statement will impel other companies to provide better access to changing tables for both mothers and fathers.

To show support for this movement, sign the petition at Change.org.

First Photos Of Dads And Babies
More:
doyin richardschanging tablesparents-dadsParentschange.org
Newsletter Sign Up
Raise the kind of person you'd like to know
Subscribe to our parenting newsletter.
Successfully Subscribed!
Realness delivered to your inbox