When Ashton Kutcher was named the star of "Jobs," the Steve Jobs biopic, back in April, some were skeptical as to whether the "Two and a Half Men" actor could pull off the Apple founder.

But in a new photo taken of Kutcher while he films in India, it is clear that the actor bares a striking resemblance to the late Jobs.

A bearded Kutcher was photographed filming "Jobs" in New Delhi near the famous Jama Masjid mosque, according to the Hollywood Reporter. The photo was posted on the Facebook page "I Love New Delhi".

The Hindustan Times published the photo on Thursday and reported the 34-year-old has been in India since Monday.

“Kutcher is already here since Monday and he shot at the Safdarjung Madarsa on Tuesday,” a source told the newspaper, adding that the actor was also spotted shooting at Vrindavan on Wednesday. “He shot a couple of scenes there that show that he is meeting someone and attaining enlightenment."

"Jobs" tells the story of the tech wizard's rise from college dropout to one of the most revered creative entrepreneurs of the 20th century, according to the IMDb synopsis. It is due out in 2013.

Kutcher's venture to India recounts Jobs' 1974 trip to the country with friend Dan Kottke. "Deeply philosophical then, Jobs wanted to study and experience spiritualism and existentialism," The Times of India notes. "In India, he wanted to visit the Neem Karoli Baba at his Kainchi Ashram. However, when they arrived they learn't that Baba has died." Jobs also took LSD while he was there.

The independent biopic is being produced and financed by Five Star Institute's Mark Hulme, THR reported in April. It is a serious move for Kutcher, whose film career has teetered on roles in romcoms, including "Just Married," "What Happens In Vegas," "Valentine's Day" and "No Strings Attached." 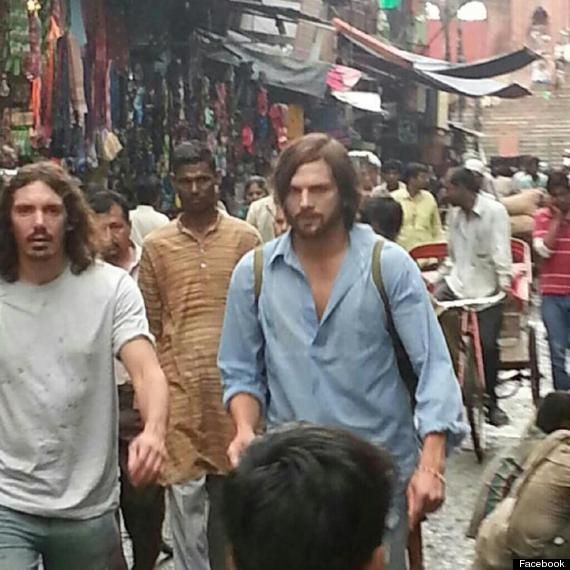