Paris Hilton had an improbable dinner date in L.A. Saturday: a gray-haired, orange-robed "shaman" who blessed her and urged her to give a diamond necklace to a total stranger. 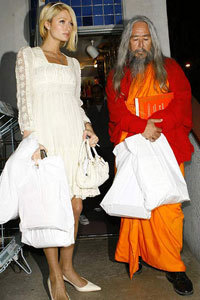 Like most everything she does, the event was captured by dozens of cameras. News quickly spread to London tabloids, TMZ.com, the New York Daily News and websites of the Los Angeles Times and San Francisco Chronicle, who wondered if she'd found religion or was seeking spiritual guidance.

"He's really changed my life," Hilton told paparazzi from her car, adding she offered the necklace "because the greatest gift is to give."

Turns out, as some outlets later discovered, the "mystic" was an actor named Maxie Santillan Jr., who has appeared on CSI and My Name Is Earl. And though some accused Hilton of getting Punk'd, the joke's on them: The entire scene was staged for a new show from Punk'd producer Ashton Kutcher premiering Sunday on E! (10:30 ET/PT).

Read some of stories of Paris and her shaman at the LA Times, TMZ and the Daily Mail.

Watch video of the pair driving around LA

See Maxie Santillan Jr's IMDB page and check out a picture of him (far left) on the set of "Pirates of the Caribbean": 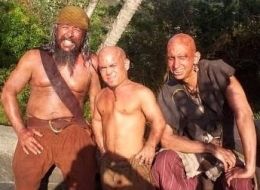