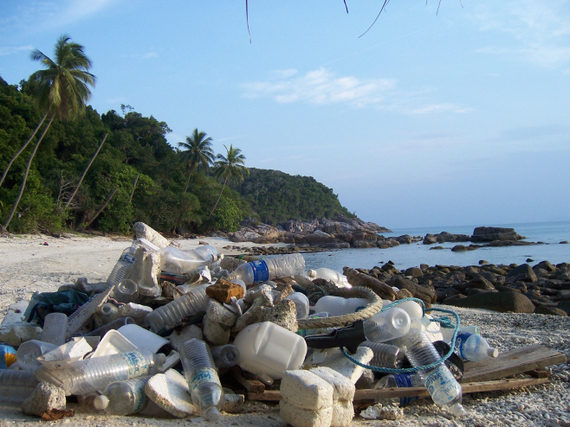 "Despite the government's 10 years of 'clean river' campaigns, 700kg of garbage is dumped to Sungai Klang, the river that flows into downtown Kuala Lumpur, the capital of Malaysia," said Datuk Hanapi Mohamad Noor, a former director at the government's Department of Irrigation and Drainage. A spokesperson for the Sungai Klang Basin office of the Department of Drainage and Irrigation said, "We've found things like sofa sets, mattresses, refrigerators, washing machines and even motorcycle frames."

Director Noor said, "The government should carry out a steady program all year long instead of having occasional campaigns." The Malaysian government plans to invest RM3 billion for the 'River of Life' project until 2020 in order to clean the Sungai Klang river.

China is suffering from the waste problem as well. Chinese police have detained a group of men for transporting nearly 2,000 tons of industrial waste from Shanghai and dumping them in a farm in Haimen in Jiangsu Province, reported the China News Service on July 19. Last month, a group of people were detained by police for dumping more than 12,000 tons of garbage to a lake in Suzhou in Jiangsu Province. Environmentalists pointed out that this cases reveal the loopholes in waste management by the Chinese government.

Hong Kong is troubled with a significant waste problem, too. According to a recent data released by Hong Kong government, Hong Kong citizens generate more waste per capita than any other city in Asia. Dr. Jeffrey Hung from environmental organization Friends of the Earth said the current rate of consumption of Hong Kong residents was "highly unsustainable", pointing out that over-consumption is one of the major causes.

A large amount of garbage that flew from mainland China to Hong Kong beaches created a conflict between China and Hong Kong. From July 1 to 9, Hong Kong government collected 78,000 kg of waste during a beach clean-up in Lantau. Chief executive Leung Chun-ying said he would follow up with Guangdong Province authorities about the situation.

Indonesia, which produces 64 million tons of waste a year, set up a 'garbage bank' system to reduce the volume of waste at the household level. Under the system, customers would bring their trash to the bank and the bank would transfer money to the customers' accounts. After a certain period of time, customers can take out the money from their accounts. According to the Indonesian Ministry of Environment, there are nearly 2,800 garbage banks are operating in 129 cities across the country, and nearly 175,000 people opened their accounts in the garbage banks.

According to a paper by Dr. Jenna Jambeck published in the journal Science, China and Southeast Asia are among the world's worst plastic polluters. The paper estimated 4.8-12.7 million metric tons of plastic waste entered the ocean in 2010. In addition, Dr. Chelsea Rochman and his research team revealed in a paper published in the journal Nature that they found plastic fragments in 28 percent of fish caught in Indonesia.