Our first installment on Asian American voters reviewed the potential for this often disregarded group to be pivotal in 2016 and reported findings from the most recent survey of their vote preferences in this year's presidential and Congressional races. Asian American voters, in sum, find overwhelming favor with Democratic presidential nominee Hillary Clinton over Republican nominee Donald Trump and with Democratic congressional candidates over their Republican counterparts. To review: in the race to be our 45th president, Clinton outpolled Trump 63 percent to 17 percent (or a two-way split of 78 percent to 22 percent). In down-ballot congressional races, Democrats were favored over Republicans by a 59 percent to 21 percent margin (or a two-way split of 74 percent to 26 percent).

This second installment dives deeper into the data from the Asian American Decisions (AAD) pre-election poll-to examine some reasons why Asian American voters appear to so heavily favor Democratic candidates again in 2016. Specifically, this post examines reason-based and feeling-based sources of their support for Clinton and Trump. Do Asian American voters feel pulled between the dictates of their mind and the beguilements of their heart?

In most years and for most elections, political scientists often think about a citizen's vote choice as an informed, rational choice between two candidates, much in the same way that we might shop for something. With shopping, we might first ask what goods we should shop for, and then ask which of the products available better suit our needs and preferences. Carrying this analogy over to elections, we would first find out what a voter cares most about and then ask which candidate or party is closer to his or her views on those issues. The AAD survey followed this line of thinking by asking respondents: "Thinking about the 2016 election, what are the most important issues facing the United States that our politicians should address?" and for those issues mentioned, following-up by asking "which party is closer to your views?" and "which presidential candidate is closer to your views?" 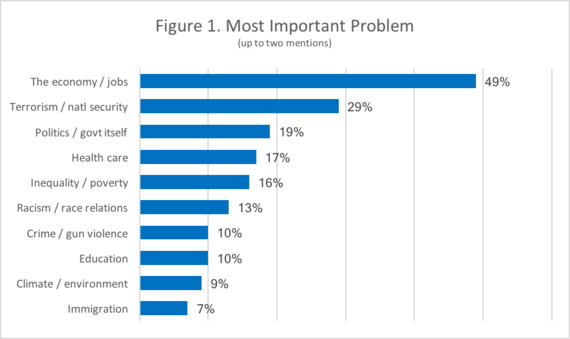 Figure 1 shows the distribution of answers to the first question, tallying up to two "most important" issues respondents mentioned. As in previous surveys of Asian Americans and with the general views of all Americans in other polls like Gallup, the economy continues be topmost in the minds of problems mentioned. Nearly 1 in 2 respondents mentions the economy or jobs as one of the two top issues facing the nation. After the economy, Asian Americans are most concerned about terrorism and national security (29 percent), politics and government itself (19 percent), health care (17 percent), income inequality and poverty (16 percent), and race relations and racism (13 percent). Notably, while education and immigration are often considered core issues for Asian American voters, their salience in 2016 appears secondary to these other issues.

When respondents were then asked whether Hillary Clinton or Donald Trump is closer to their views on these most important issues, Clinton's advantage over Trump becomes quite clear. With the sole exception of terrorism and national security, where 42 percent of respondents favor Trump's views and 40 percent favor Clinton's, Asian American registered voters' views on their most salient issues align far more often with Clinton than with Trump. On the economy, Clinton is favored over Trump by a two-to-one margin; on health care and race relations, the advantage is roughly four-to-one; on income inequality and poverty, it is almost 10-to-1. Even on public outrage over politics and government itself, arguably Trump's signature feature as an "outsider" candidate, Clinton enjoys a 59 percent to 42 percent advantage. 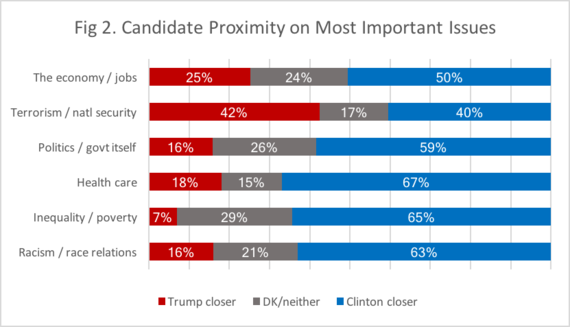 There is a clear take-away here: if Asian American voters are voting with their heads and on the issues, that calculus clearly favors Clinton over Trump.

The Year of Angry Voter?

Of course, 2016 may not be like most elections and most years. Much of the public accounting of this year's campaign has been a story of angry voters using their ballots as battering rams against the gates of the DC establishment. So, how do emotions factor into the Asian American vote?

Here, the AAD poll asked respondents if either Donald Trump or Hillary Clinton, "because of the kind of person s/he is or because of something s/he has done or said" had made them feel one or more of the following: angry, afraid, hopeful, or proud.

The AAD poll finds that Asian American registered voters, like the rest of the nation's electorate, have been roused by this year's campaign. Roughly three in four respondents answered that Donald Trump had evoked feelings of anger (79 percent) and fear (73 percent), while only 23 percent felt hopeful and 14 percent proud in response to Trump. On Clinton's ledger, a substantial number of respondents too felt anger (43 percent) and fear (34 percent), but unlike Trump, an even greater share of respondents felt proud (48 percent) and hopeful (55 percent) in response to her candidacy. Perhaps unsurprisingly, Asian American women are especially likely to attach positive feelings to Clinton's candidacy: 65 percent report feeling proud and 70 percent hopeful, compared to only 37 percent and 49 percent, respectively, for Asian American men. 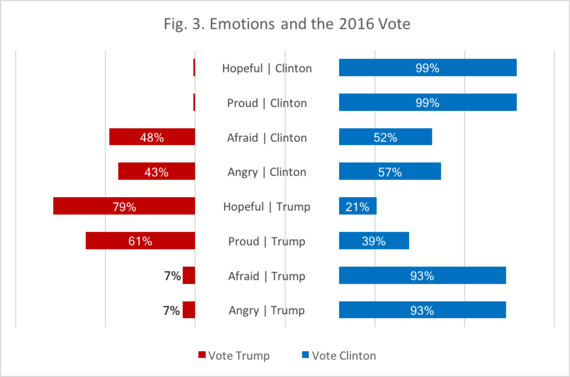 What makes these contrasts in emotions even more powerful is the difference it makes in the likely votes of Asian Americans. The effect of negative sentiments toward Trump and positive sentiments toward Clinton in Figure 3 are unsurprising and near totalizing: Asian Americans who are made fearful and angry by Trump are nearly uniformly disposed to vote for Clinton (93 percent); Asian Americans who are made hopeful and proud by Clinton fall just shy of unanimous in their intent to vote for Clinton (99 percent). More notable is the difference between positive feelings for Trump and negative feelings for Clinton. Even among Asian Americans who feel the swell of pride from Trump, only a minority (38 percent) expect to vote for him; with hope, the proportion is an even smaller 21 percent. By contrast, even among those who feel anger and fear from Clinton, a majority expect to vote for her (57 percent and 52 percent, respectively).

The results of the AAD pre-election poll show some of the foundation for the likely lopsided Asian American vote in favor of Democrats this coming election Tuesday. Clinton nearly runs the table on the issues that matter most to Asian American registered voters, but for Trump's slim advantage on the issue of fighting terrorism and national security. Moreover, in the clash of sentiments, negative feelings against Trump and positive feelings toward Clinton are nearly perfectly associated with the intent to vote for Clinton. The flip side of the coin-positive feelings toward Trump and negative feelings against Clinton - do not have nearly the same relationship to intent to vote for Trump.

As a final share-out for this blog, these advantages Clinton holds help to shed light into why there is no apparent "enthusiasm gap" among Asian American registered voters. The narrative of voters who see Clinton as a lesser of two evils and who support her only begrudgingly does not seem to hold for Asian Americans. Both Clinton supporters and Trump supporters in the AAD poll were asked "How enthusiastic would you say your support is"? 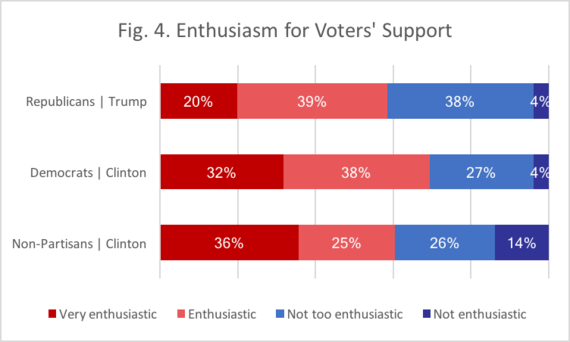 These findings on the role of voters' salient issues, sentiments, and enthusiasm is the second in three installments about the Asian American vote leading up to Election Day. Next week's final post will examine whether and how background characteristics like gender, age, ethnicity, and nativity shape turnout, vote choice, and mobilization. These results preview a major Election Eve poll that Asian American Decisions will conduct in partnership with Asian American and Pacific Islander Civic Engagement Fund and several other co-sponsoring organizations. The 2016 Eve poll will include a nationally representative sample of Asian American voters as well as oversamples in seven additional states: Florida, Illinois, Nevada, North Carolina, Pennsylvania, Texas, and Virginia. Findings from the Election Eve poll will be selectively released November 8 and November 9.

Survey Details: This poll surveyed 300 Asian American registered voters who were randomly recruited from a list of registered voters to complete an online survey. The sample was restricted to the six primary Asian American groups, comprising 85 percent of the total U.S. Asian American population: Chinese, Filipinos, Asian Indians, Japanese, Koreans, and Vietnamese. Interviews dates were September 29 and October 13, 2016. The questionnaire was offered in English, Chinese, Korean, Tagalog, and Vietnamese. 24 percent of the sample took the interview in a non-English language. The margin of error for the results is +/-6 percent.