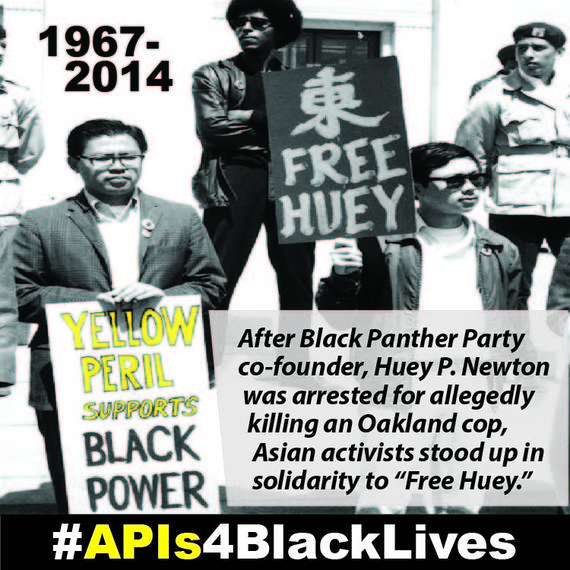 Last week I spoke on a panel at the Museum of Chinese Americans titled, "MOCACITIZEN: Let's Talk About Ferguson and Asian America." During this time of civil unrest and injustices around the Michael Brown and Eric Garner cases, it's been invigorating to see Asian Americans across the country organize in support of #BlackLivesMatter.

As someone who is plugged into national Asian American activist networks, my social media feeds and inbox have been exploding with organized efforts to mobilize the Asian American community during this time. Actions have included local and national conversations, educational forums, a social media campaign launching #Asians4BlackLives, and showing up alongside other communities of color to march in the streets and shutdown the Oakland Police Department.

It makes me proud to know that I am part of a community that is proactive, visible and vocal about taking a stand against anti-blackness and aligning on the side of social justice for all.

However, none of this is shown in the news coverage I'm following about post-Ferguson protests. Asian Americans are consistently portrayed in mainstream media as invisible, passive, a model minority and worse of all, positioned in opposition to the black community.

Where was the media coverage and public outrage when 19 year old Hmong American, Fong Lee, was fatally shot eight times by an officer who faced no penalty?

Where was the media coverage and public outrage when Vietnamese American, Cao Bich Tran, was fatally shot in 2003 by officers who were not indicted?

Where was the media coverage and public outrage when unarmed Michael Cho was fatally shot 11 times by La Habra police, who were declared of no wrongdoing?

Peter Liang's story supports a popular narrative that has historically positioned Asian Americans against other communities of color. Although the Asian American community is complex and nuanced due to its multi-generational and multi-ethnic nature, it is generally framed as the model minority, academically successful and compliant with authority.

Lee's, Tran's and Cho's stories contradict the mainstream narrative by revealing the reality of many Asian Americans as being impoverished, 1st generation, targeted by law enforcement and victims of injustice - from police brutality to deportation.

When I first saw Peter Liang's headline surface amidst the outrage of police brutality, I could feel the collective cringe of Asian Americans across the country shaking heads in angst. Understanding the power of mainstream media to shape minds and the historical pattern of Asian Americans being propped in anti-black racism, it was not far-fetched to feel as if this one story threatened to derail solidarity efforts.

In addition, it is not unheard of that some Asian Americans have participated in anti-blackness. This goes back to the fact that the Asian American community is a complex conglomerate that can not be characterized or defined as one. Without making excuses, anti-black racism by Asian Americans could be attributed to internalized racism from media and also the varying degrees of relationship to authority due to immigration and refugee backgrounds.

Regardless, I never allowed the observation to mutate into resentment. I was aware that tensions between the Black and Asian community exist as a result of media propaganda and lack of interracial community organizing and education.

By the end of the event, an Asian American woman in the audience mentioned that there would be another community meeting to discuss Asian American mobilization, specifically in response to the Peter Liang story and pending grand jury decision.

At that point, I reiterated the idea that mainstream media is a tool in promoting anti-blackness and Asian Americans are often a bolt to fasten that message. Which is why it is absolutely critical and necessary for us to continue being vocal, being present and being felt, so that it is clear where we stand. Mainstream media will continue to position Asian Americans in alignment with an anti-black racist agenda, so we must speak up to align ourselves on the side of justice for everyone. 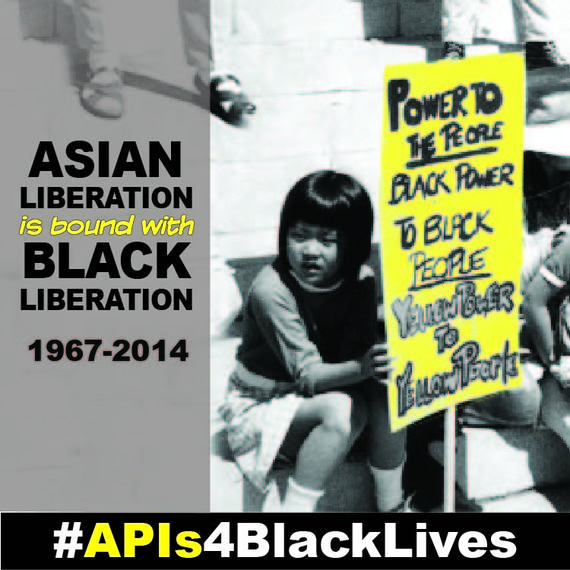