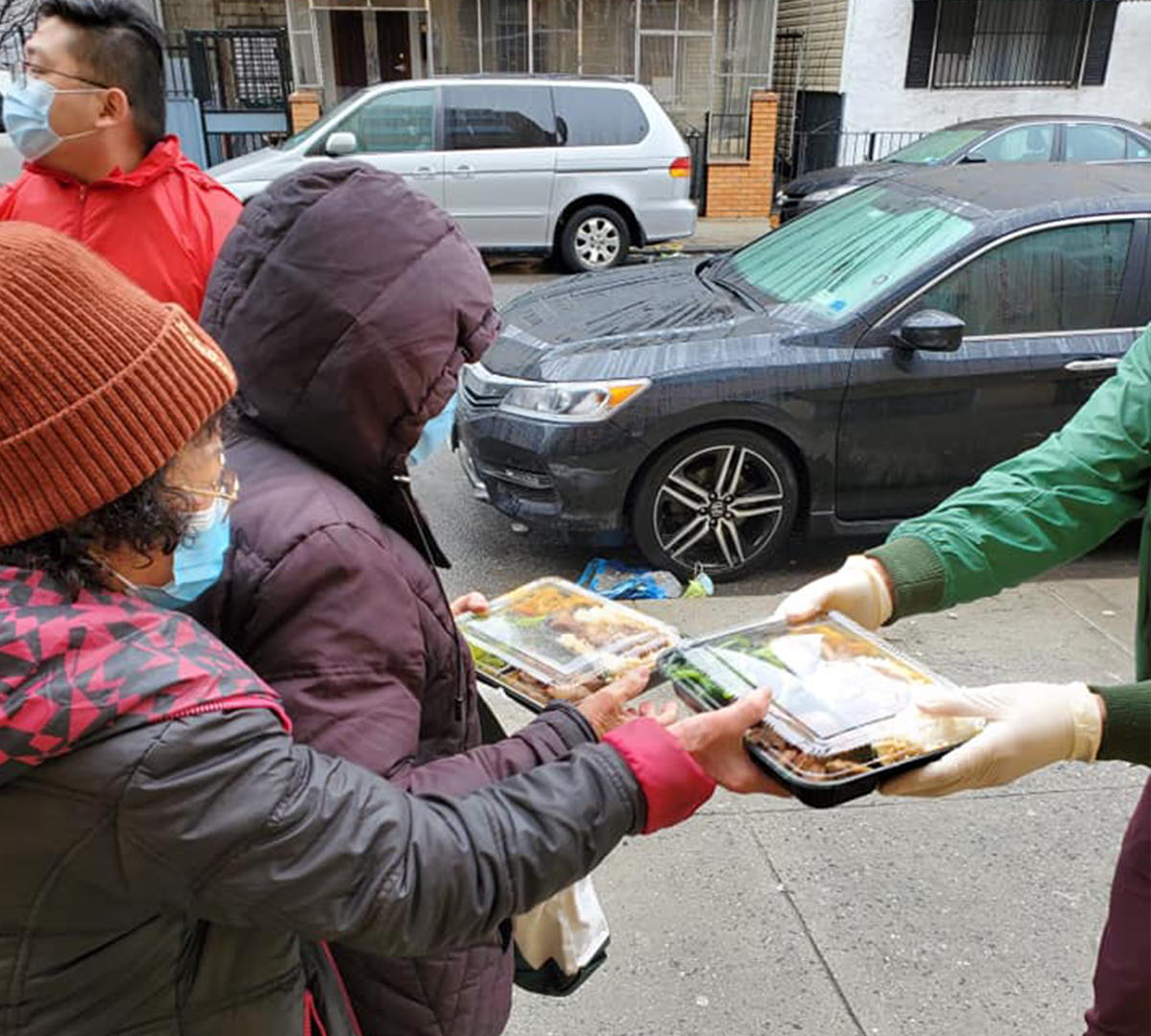 Working with the Street Vendor Project during COVID-19, food truck and pushcart owners give back while also getting paid.

Few cities boost a more thriving food vendor culture than New York City: On any given day ― at least pre-pandemic ― the city and its boroughs were brimming with pushcarts and food trucks serving everything from Tijuana-style birria beef tacos to bouncy chee cheong fun noodles.

But the pandemic has been rough on the city’s food vendors, many of whom are immigrants. Much of the vendor community is ineligible for government support such as paid sick leave, unemployment insurance or even most loans and grants offered to small businesses.

This COVID-19 economic crisis has been particularly hard on Asian Americans in these informal service positions.

Across the country, Asian-owned small businesses have taken an outsized hit during the pandemic, grappling with record job and income loss and consumer prejudice toward Asians fueled by racist rhetoric about the origins of the coronavirus.

In March of last year, unemployment claims by Asian Americans in New York state spiked by 6,900% — by far the largest percentage increase experienced by any one racial or ethnic group.

In this time of need, one group stepped in with a solution, at least for food vendors: Over the last year, the Urban Justice Center’s Street Vendor Project ― through major funding from the Stavros Niarchos Foundation’s $100 million COVID-19 relief effort ― paid more than 90 vendors to get back in their trucks and cook free meals for food-insecure New Yorkers.

From August to May, roughly 18,780 meals were distributed at sites in Brooklyn, the Bronx and Queens.

“This project has been able to one, support small businesses; and two, be able to provide hot and nutritious meals ― and culturally appropriate meals ― to a lot of the immigrant community,” said Carina Kaufman-Gutierrez, deputy director at the Street Vendor Project.

Yuan Zhen Wang, who lives in Flushing, Queens, was one of the vendors who participated in the program.

“A typical day started at 8 a.m., when I departed from my home in Flushing and drove to my spot in front of NYU’s Elmer Holmes Bobst Library,” he told HuffPost. “I usually would close up around 7:30 p.m.”

When the COVID-19 pandemic hit a critical point in March 2020, Wang’s fears for his small business quickly turned into a reality: The lion’s share of his business came from NYU students going to and from the library. With so many students moving off campus ― and so many office workers decamping to the suburbs or out of state ― it was near impossible to stay afloat.

“The pandemic devastated our business,” Wang said. “The streets were empty. We stopped vending and stayed at home during the lockdown out of concern for our own health and safety.”

In June, Wang decided to start vending again ― mobile food vendors were considered essential workers ― but business was abysmal; on a good day, he was lucky if he could pull in $100, an amount so small that it couldn’t cover the cost of gas for his truck.

The unemployment benefits his family received all went into paying off fees, rent, and bills for storage and garage space.

“Out of desperation, I decided to try vending again in September but business was even worse than it was back in June,” he said. “I could only make about $30-$50 a day. I stopped after about 20 days. Since then, our family has had to work various part-time jobs to bring in income.”

Still, in the last year or so, the Street Vendor Project has helped Wang get by.

“I am very grateful for the support the SVP community has given me over the years, especially the food distribution program, which was a precious source of income during this extremely difficult time,” he said. 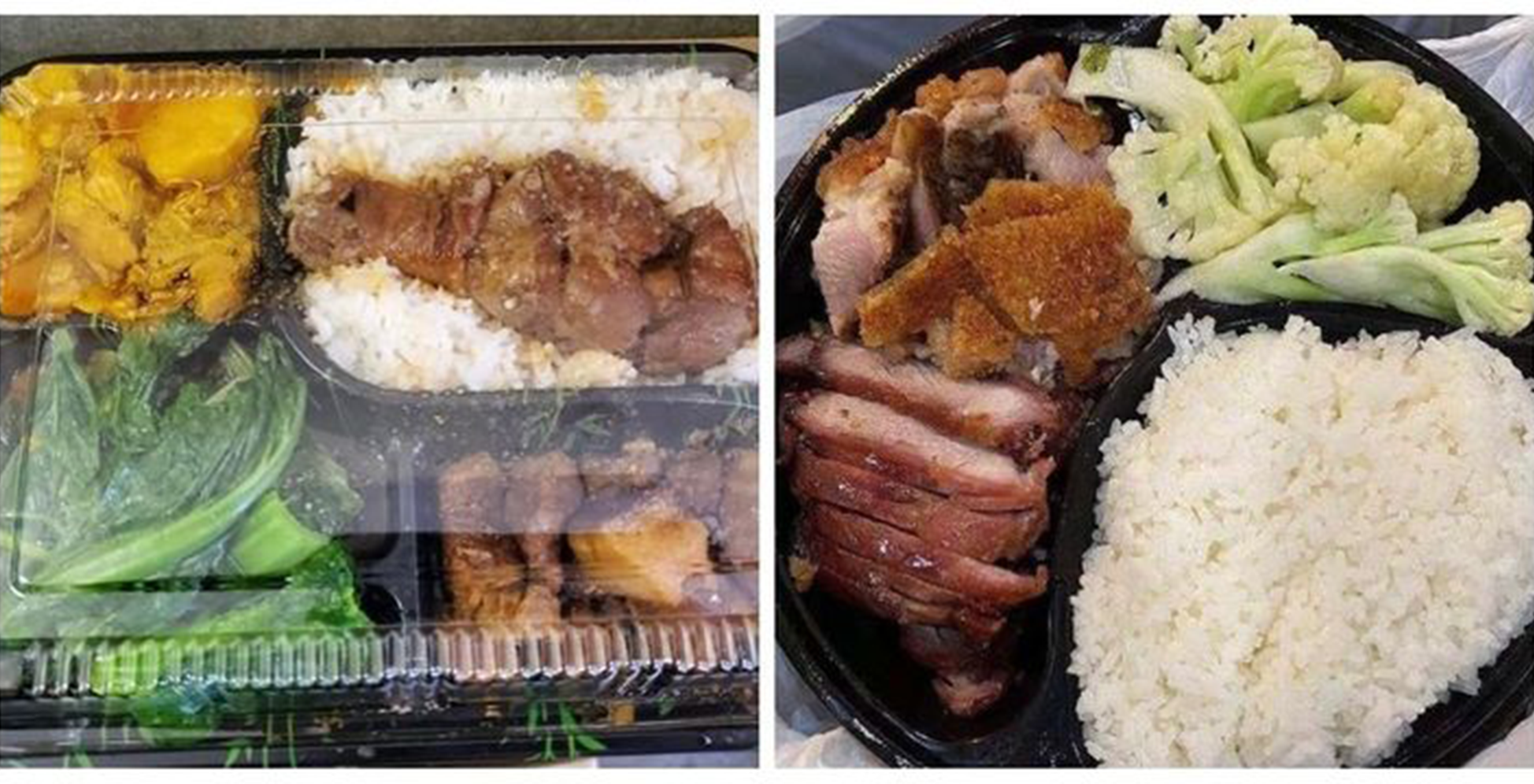 A few of the meals provided at distribution centers by vendors working with the Street Vendor Project.

It was a big sticking point that meals vendors like Wang provided were culturally appropriate to the communities they were offered in, said Kaufman-Gutierrez.

“Culturally appropriate meant that meals prepared for the primarily Chinese community in Sunset Park included stir-fried chicken and vegetables, General Tso’s chicken and teriyaki chicken while Halal meals cooked by Egyptian and Bangladeshi vendors were provided to fellow Muslims when working at a mosque for distribution,” she explained.

When setting up distribution centers in East Elmhurst and Jackson Heights, where the majority of community members have a Latin American background, the group worked with Ecuadorian and Mexican vendors.

“We offered pollo guisado, rice and beans, and barbacoa there,” Kaufman-Gutierrez said.

Steve Mei, director of the Chinese American Planning Council’s Brooklyn Community Center, ran one of the food distribution points at his facility in Sunset Park.

“The huge turnout was a testament to the need to address food access, but also a testament to the delicious and culturally sensitive meals that were offered,” Mei said. “The recipients of the meals tend to be older adults from immigrant backgrounds. Food that reminds them of home, gives them a sense of comfort, is extremely important and welcomed.”

The vendors, meanwhile, got a chance to give back while also getting paid.

“Really dating back to December of 2019 and January 2020 before the first case of COVID was detected in NYC, Asian restaurants and food vendors were already struggling with lack of business due to fear, discrimination and misunderstanding,” Mei said.

“As restaurants are starting to reopen in limited capacities, we can still see that these restaurants and food vendors are still struggling to survive,” he said.

Mei pointed to 8th Avenue in Brooklyn ― a major business hub in the Asian community where many food businesses have closed down permanently ― as an example of the struggle.

City Council Member Vanessa Gibson, whose constituents in the Bronx received some of the food, worked at one of the distribution sites and praised the program. Like the Street Vendor Project, Gibson hopes to see lasting support for food vendors in the city.

There’s been some progress; Gibson pointed to recently passed legislation in the New York City Council that will create 4,000 new permits for street vendors in the city over the next decade while also establishing a separate law enforcement unit to oversee the street vending community. (In recent years, the NYPD has taken heat for what many see as over-aggressive enforcement of street-vending laws.)

“The reality is that there are a lot of unlicensed vendors in New York City simply because the permit system has been closed for over 30 years,” Gibson told HuffPost. “With the recent action at the City Council, we are creating a space for street vendors to be licensed and to have safety guidelines in place while also protecting our small businesses.”

Mei hopes that the city will continue to support vendor business instead of criminalizing them.

​“Food vendors are a heartbeat of an immigrant community,” he said. “They make up some of the hardest working people putting in long hours to make ends meet and provide for their families. Instead of making it more difficult for vendors to make a living, we need legislation that supports street food providers.”

Amanda Nguyen’s Fight For AAPI Justice Is An Intersectional One