In what may be one of the most offensive Halloween costumes to surface this year, a group of men dressed up as bloodied flight attendants from the Asiana Airlines crash manage to both mock a tragic accident and display blatant racism. 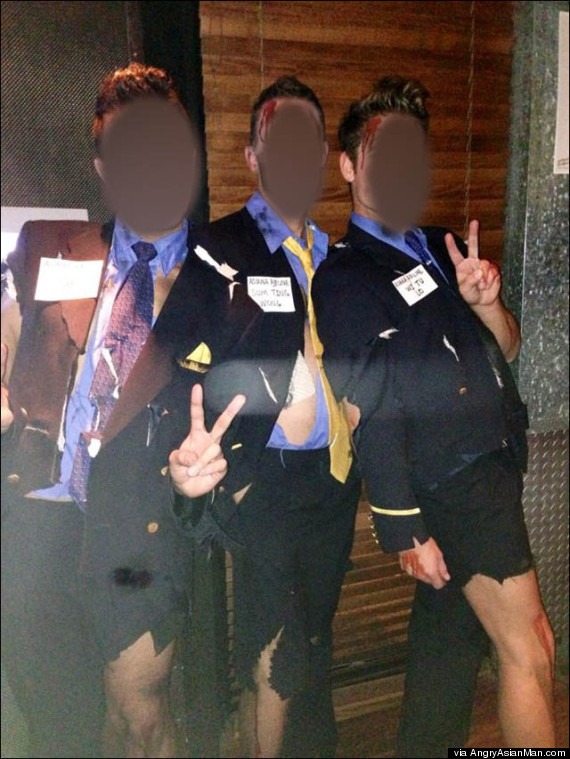 “Three people die, dozens more injured. At least you guys got a good Halloween costume out of the tragedy,” wrote blogger Angry Asian Man, who originally posted the photo.

As if that wasn’t offensive enough, the trio added nametags identifying themselves as Sum Ting Wong, Ho Lee Fuk and Wi Tu Lo, as borrowed from the wildly inappropriate joke that erroneously made its way onto San Francisco’s KTVU broadcast about the crash.

The bar at which the photo was allegedly taken posted a carefully phrased tweet that appears to be finger-wagging at the incident:

Hey friends, be creative this Halloween but be aware that your "good idea" may be hurtful & insensitive to others. We all share this world.

Sadly, these guys weren't the only ones with the "good idea." An Instagram user posted this photo from the MontBleu Resort Casino and Spa in Lake Tahoe, Calif. Notice the delightfully racist caption: "#justwrong or should I say 'Wong'?"

This isn't the first offensive Halloween costume to spark outrage this year. Julianne Hough wore blackface in her “Orange Is the New Black” get-up, while another dynamic duo paraded as Trayvon Martin and George Zimmerman.

Unsure if your costume is crossing the line? Figuring that out is pretty simple.

“Let's sort this out once and for all,” Gawker wrote in light of the Asiana Airlines costumes. “If you have to wonder whether or not your costume is racist, it is.”