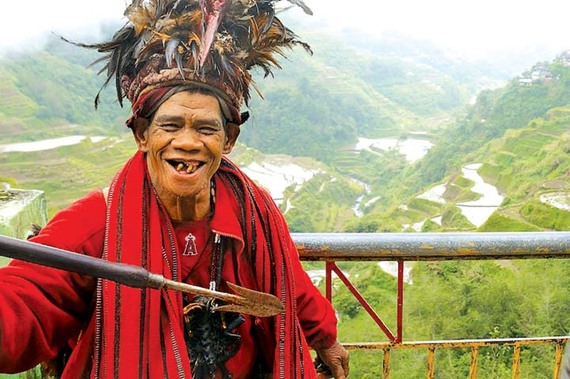 It's a sunny afternoon in Sagada, a verdant region in the northern Philippines famed for its beautiful rice terraces. I've spent my first morning here hiking perilous mountains, seeing hanging coffins and trying not to step on bat poop in caves.

I'm climbing back into my tour jeepney when, alarmingly, the driver at the wheel clears his throat and abruptly spits a viscous chunk of bright red blood onto the ground. I stare at him in shock. He sees me watching and flashes me a smile, at which point I notice that his teeth are terribly rotten, and stained a dark shade of brown.

Concerned about the driver's health, I stare out of the window and wonder how I can help him. We bump back down the winding mountains, passing clusters of brightly-dressed Ifugao tribespeople walking here and there on the paths. With shock, I see that some of them, too, are spitting blood. An elderly woman catches my eye as we pull over. When she grins at me, her teeth are almost black. Heart racing, I try not to panic. Why is everyone spitting blood? Why do they have rotten teeth? Has everyone in the area aquired some raging, never-seen-before strain of tuberculosis? Is it infectious?

When Salvador, my guide, meets me at the jeepney, I ask him anxiously about the blood. "They are not spitting blood, ma'am," Sal tells me, laughing. "We chew nga nga. It makes our mouth red." He chuckles again and points to his teeth, which are stained red and brown. Although I feel like a bit of an idiot, the revelation that the entire province is not in fact afflicted with an infectious disease is a hugely comforting and enlightening relief. 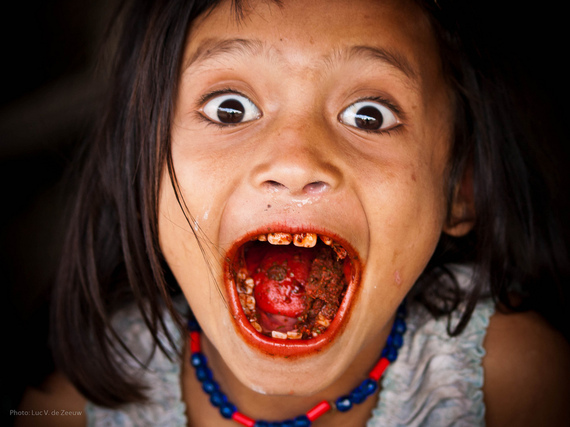 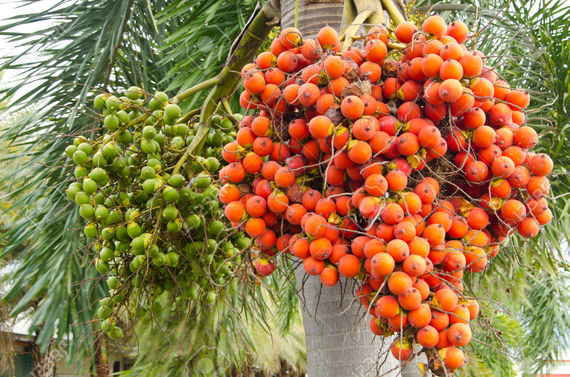 Betel or Areca "nuts" hanging from the Areca palm tree

As it turns out, this elusive nga nga is the Tagalog term for "betel nut chewing", which is the culprit for all the stained mouths and viscous red saliva I've seen. The betel or areca nut is a naturally-occurring seed -- technically a fruit, or a "drupe" -- which grows on the areca palm (Areca catechu), a tree species indigenous to Asia, the tropical Pacific, and parts of east Africa.

Along with other spices, but most often tobacco, areca nuts are sliced up, wrapped in betel leaves, and coated in slaked lime before being chewed as a mild stimulant. Globally known as paan, or "betel chewing", this rousing concoction remains one of Asia's oldest, greatest addictions. 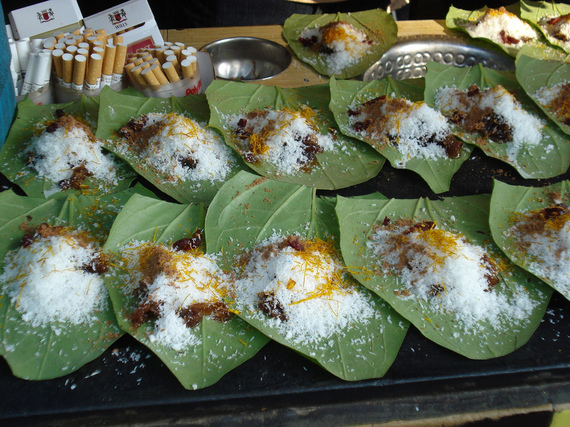 Chewing paan causes slightly heightened alertness and a warming sensation in the body -- a buzz comparable to drinking a cup of coffee. If tobacco is added, the effect of nicotine is intensified. Repeated use is terrible for the health -- it's like an earthier version of snuff, cigarettes, and alcohol.

After chewing paan, the eater's mouth is typically left with stained red lips and teeth, and causes profuse red coloured salivation. Looking startlingly similar to blood, saliva is usually spat out -- which yields a viscous crimson stain upon whatever surface is spat on. Multiple countries have laws against paan spitting in public places.

Today, an estimated 600 million people around the world chew betel quids, which, after tobacco, alcohol, and caffeine drinks, makes them the fourth most commonly used psychoactive substance internationally.

How Long Has Betel Chewing Been Happening?

Betel chewing is a ritual heavily ingrained in Southeast Asian culture, dating back thousands of years across the Pacific. Asian and Oceanic countries that adopted the practice include the Philippines, Palau, Guam, Papua New Guinea, China, Indonesia, Thailand, Cambodia, Vietnam, India, and Nepal.

In the Maldives, Taiwan, Papua New Guinea, Guam, and India, the tradition thrives. The chewing of areca nuts in these countries is ubiquitous and they are available almost everywhere, with or without betel leaf, and almost always with tobacco. 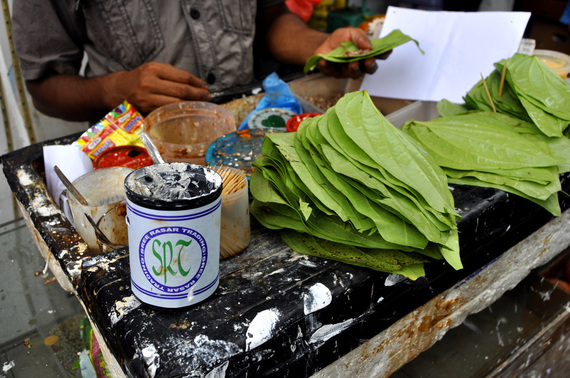 Taiwan has built a distinct culture built around betel, which is now mostly chewed by blue-collar workers and truck drivers. The term "betel nut beauty" or "betel nut girl" harks back to a once-common sight along Taiwan roadsides: scantily-dressed young women selling betel nuts and cigarettes from neon-lit glass enclosures.

In Vietnam, the common saying, "the betel begins the conversation", refers to betel being used to "break the ice" in awkward or formal situations. The ritual forms an important part of new marriages: when the areca nut and the betel leaf come together, it signifies the couple's love joining as one.

In the Philippines and Thailand, betel chewing was once a widespread cultural custom. Although urban areas, cities, and big towns have replaced the tradition with more modern vices like cigarettes and gum, betel nut chewing remains very much alive in rural areas. Chewing betel in these countries is now mostly done amongst rural tribes, lowland provincial folks, and elder generations.

Chew It With Caution 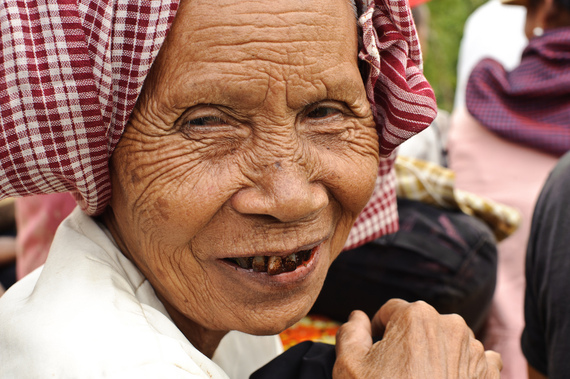 A Thai woman shows us why you probably shouldn't chew betel so much. Credit: Tara and Tyler of goingslowly.com

According to scientific research, betel nut chewing greatly increases the likelihood of developing serious diseases including cancers of the mouth and esophagus. Chewing areca nut on its own has been linked to oral submucosal fibrosis.

In 2003, the World Health Organization sponsored group, International Agency for Research on Cancer (IARC) concluded that sufficient evidence of chewing betel quid, even without tobacco, is carcinogenic to humans. Further immediate health effects include gum damage and tooth decay.

The severe tooth decay and stained crimson mouths of millions of Asian, South East Asian and Pacific inhabitants around the world can be attributed to their addiction to betel. Possession of betel nut or leaf is banned in the UAE and is a punishable offence.

The selling of betel in the UK and U.S.A. go largely unnoticed, sold openly at Asian supermarkets markets. However, betel chewing in the western world is rare in comparison to more widely used vices such as cigarettes and alcohol.

Within recent years, there have been health concerns that spitting betel is spreading airborne diseases and staining public environments. The Papua New Guinea government has long sought to ban betel nut consumption, but its popularity and contribution to local economy has made it difficult to enforce the legislation. 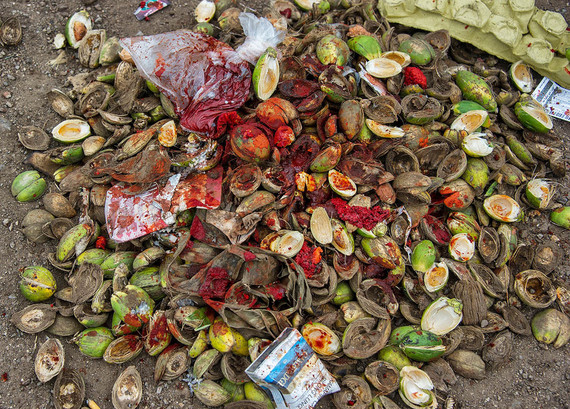 Discarded betel nuts and paan spittle littered on the ground. Credit to Lightgalleries.net.

Should You Try Paan?

You will likely encounter betel nut chewers or paan vendors on your travels around Asia. My advice is that if a local at the place you're visiting ever offers you paan, you should probably accept it, at least out of politeness. The symbolism of betel nut chewing and paan runs so deep through Asia's veins that not accepting the concoction might cause offence.

If you're curious about paan, go ahead and try it. The buzz is about the same as coffee or a nicotine rush, which can both make you woozy if you're not used to its effects. But remember, paan is ultimately harmful to the health. By trying paan in moderation, you will appreciate its unique cultural offering all the more.


Adapted from original article at www.illumelation.com