Suffering from the lingering image of a money-laundering husband of a world-famous political icon, Benazir Bhutto, former president of Pakistan Asif Ali Zardari is fast emerging as an intellectual patriarch of Pakistani politics. In a country where politicians are crude and petty, Zardari comes across as a statesman with a profound sense of reality mixed with intriguing idealism. For many Pakistanis, Zardari is still no more than a power-hungry widower of a murdered heroine. On a closer look, however, one finds that Zardari has been on the cutting edge of enlightenment in a conservative country sandwiched between militarism and Talibanization. During his term in office as the President of Pakistan (2008-2013), and more importantly as the Co-Chairman of Pakistan Peoples Party (PPP), a party he inherited much like property from his in-laws, Zardari promoted women at key posts. He selected a woman as the Speaker of the National Assembly, making her the first woman in Pakistan to lead a powerful house of the legislature. Zardari selected another woman to be the first Minister of Foreign Affairs in the history of Pakistan. The selection of these women, which might have been a loving tribute to his slain wife, was both courageous and path-breaking. It was courageous because most politicians in Pakistan are male chauvinists and it was path-breaking because these women held high positions of authority in a conservative Muslim country where many men see women as household commodities. 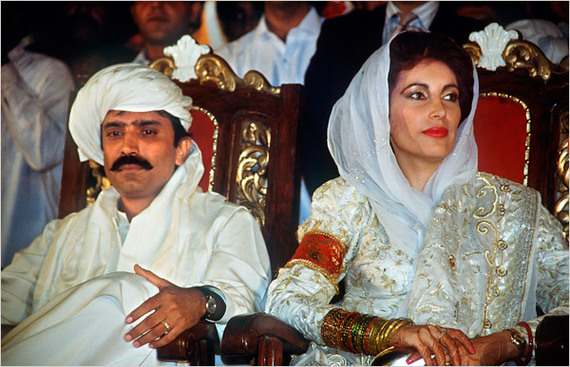 It is also refreshing to see Zardari offering sensible and smart insights into the art of problem solving. Welcoming the establishment of a judicial commission to investigate the charges of rigging in the 2013 general elections, Zardari said: "Wisdom is not the monopoly of one or few political parties. Truth and wisdom emerges only as a result of discussion among a large number of stakeholders in which each lays claim to a bit of the reality." This comment is both practical and theoretic. Practical politics requires that a broad consensus be established to resolve highly divisive issues. Theoretic truth is unassailable that every stakeholder brings to the table "a bit of the reality" that must be welcomed and composed into finding a more durable solution. Even in a mature democracy, such as the United States, politicians tend to be mean-spirited and self-righteous. Few show respect for opposing viewpoints and fewer believe in the diversity of reality perspectives. Zardari is also upgrading the skills of a peace-maker as he offers political reconciliation among feuding political parties. He stood with the ruling party when Pakistan Tehrik Insaf, led by Imran Khan, was challenging the legitimacy of the Parliament and inviting the armed forces to stage a coup against the government. Zardari made a genuine effort to diffuse the crisis. Likewise, Zardari has made repeated gestures to Muthida Qaumi Movement (MQM), an ethnic political party accused of domestic terrorism, to join the PPP government in Sindh. Some politicians and media commenters argue that in wooing the MQM, Zardari is acting as an opportunist and siding with terrorists. Yet critics will agree with Zardari that a politically alienated MQM poses a huge threat to peace and security in the Sindh province, particularly Karachi.

It remains to be seen how Zardari would lead the PPP in the future. The PPP is still a party of families rather than the people. There is little democracy within the party. In 2008-2013, the PPP government at the center was a dismal failure in solving the basic problems of the people. The current PPP government in Sindh can do better by recruiting professionals, rather than old political hacks, to manage the economy and ethnic relations within the province. Zardari can allow the PPP to be internally democratized.

In addition to his own son and daughters, Zardari can invite the young sons and daughters of ordinary party workers to join the political process. Hindu and Christian minorities need to be respected within and outside politics. If Zardari dreams to be a towering political patriarch of Pakistan, and he does have the elements to be one, Zardari needs to think beyond a few prominent families and reach out to the peoples of Pakistan-not for votes but for meaningful participation in politics.