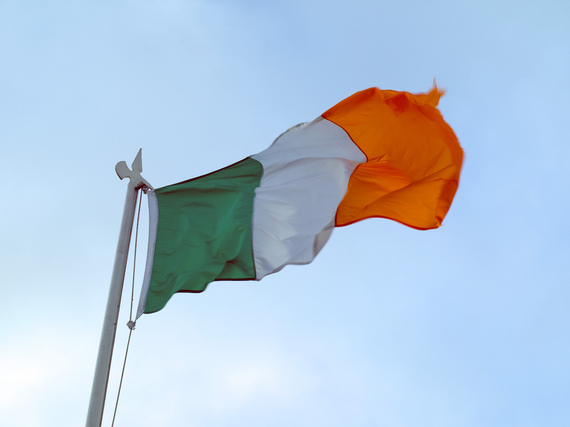 You don't have to be Irish to enjoy St. Patrick's Day - people in countries around the world enjoy merrymaking on this festive day. Here in the United States, traditions tend to include shamrock-festooned green clothing (and pinches for those who forget to wear green), rowdy parades, and green beer, but global festivities can vary greatly depending on where you find yourself. Here are a few of the more unique celebrations.

50 Shades of Greening
The annual Global Greening of landmarks ranges from Disneyland Paris' Sleeping Beauty Castle to Dubai's Burj al Arab illuminated in green on March 17th. Rio's Christ the Redeemer Statue, the London Eye, Niagara Falls and Auckland's Sky Tower are only a handful from the list of more than 180 iconic landmarks and sites. New additions this year, such as the 7 World Trade Center in New York, Palacio Municipal in Guadalajara, Mexico, and the Addis Ababa light rail system in Ethiopia, mark the seventh anniversary for this Greening initiative, which continues to grow in popularity worldwide.

Each year, 50-75 new landmarks are announced when plans for the Global Greening are unveiled by the Minister for Transport, Tourism and Sport, Paschal Donohoe, and Niall Gibbons, CEO of Tourism Ireland. New sites in 2015 last year included the Colosseum in Rome, the Grand Ole Opry in Nashville, Tennessee and the famous Porte de Bourgogne in Bordeaux, France. In the U.S., several Chicago, Illinois, landmarks also went green, including the Wrigley Building and John Hancock Centre, with special greening 'selfie stations' set up around the city before the celebrations.

In addition to proudly displaying the color green, many cultures worldwide embrace St. Patrick's Day festivities. The following is a selection of some of the most unique celebrations:

South Korea: Irish Dancing to K-pop Music
Each year in Seoul, the Irish Association of Korea hosts one of the biggest St. Patrick's Day festivals in Asia. Thousands of attendees experience the rich culture of Ireland through food, drink, parades, Gaelic football, singing, and dancing. One spectacular feature involves a fusion of two cultures, as traditional Irish step dancing is choreographed to the modern tunes of energetic K-pop music, short for Korean pop.

Montserrat: The "Emerald Isle of the Caribbean"
The Caribbean island of Montserrat, southwest of St. Johns, celebrates the holiday with a unique mix of African and Irish heritages. Descendants of Irish indentured servants and African slaves come together each year to put on a parade called the Freedom Run to commemorate the slave uprising of March 17, 1768, which eventually led to the emancipation of both cultures. The islanders celebrate St. Patrick's Day as a national holiday with an entire week of festivities filled with Creole food, masked dancers, and local steel drum music.

Denmark: Race for Charity
In Copenhagen, hundreds of participants wearing green pair up for the St. Patrick's Day Three Legged Charity Race. Teams race from Irish pub to pub, downing a half pint of beer at each one before reaching the finish line, or else undercover judges will quickly disqualify them from the competition. This year the charities supported are Laura Lynn - Ireland's Children's Hospice, Danske Hospitals Klovne (Danish Hospital Clowns), and the Cambodian Children's Advocacy Foundation. The record time to beat is 14 minutes 54 seconds.

Spain: Mediterranean Curach Regatta
The Spanish celebrate St. Patrick's Day at the Port of Barcelona with a traditional Irish regatta featuring a type of wooden rowboat (called a curach) originally from West Ireland. Today, many people have become interested in learning to hand-build and row these Irish vessels in Barcelona, demonstrating an appreciation of Irish craftsmanship and a blending of cultures.

New Zealand: The Emerald Ball
The city of Auckland prides itself on throwing the world's first St. Patrick's Day party of the year. Celebrations include a parade, a fleadh (Irish dance and music festival), and Gaelic football. The highlight of the festivities is The Emerald Ball or 'Irish social event of the year,' a formal 'green attire' gala featuring Irish music and dancing, traditional foods, and plenty of craic (Irish fun and enjoyment)!

Cheers Around the World
When offering a toast this St. Patrick's Day, try one of these international ways to say "Cheers!"

How does your country celebrate St. Patrick's Day? How are are you celebrating this year?