On May 12, I gave a speech at the #AmplifyOOH conference. As I prepared that morning in my hotel room, Karma Sherpa called. He asked if I had heard that a second earthquake struck Nepal. I hadn't, having just awoken. This was the first time I heard sadness in Karma's voice. All 32 houses and the school in his childhood village Chhulemu were destroyed. Karma was now safe in his home of Boulder Colorado, but wanted to help. He had established a group in Nepal of local Sherpas to get food, tents and other supplies to people. They needed more supplies and of course funds to purchase them. In all of the years I've known Karma (we first met in 1998), he has been the one to provide support. Now, he needed help. I donated money but wanted to do more.

I was about to go on stage, following @MalcomGladwell, to present the @MINIUSA case study in front of 1,000 people in the Outdoor Advertising industry. I realized that this stage could also be used to help Karma and the people in need in Nepal. I asked the organizers of the OAAA if it would be OK to start my remarks with a call for help. They were enthusiastically supportive. After my speech, people pledged support and went to the website to donate. But then something amazing happened. A campaign was created to get more people to support the cause, which was shared with the membership at www.OAAA.org. Within days the ads started appearing on billboards, bus shelters and other outdoor structures around the country. 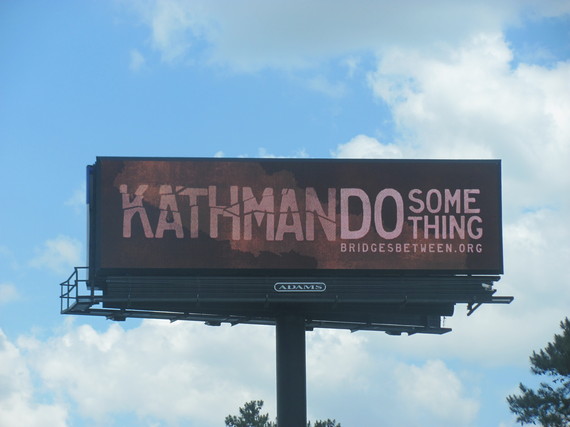 Asking for help is not in my nature. I makes me feel vulnerable. But, it's amazing what can happen when you put aside the perceived weakness and simply show a need. The response was more than the funds I hoped for. The response translated into increased awareness through advertising, which is critical to keep the help coming after the newspaper headlines move onto another situation.

Karma and I spoke again last week. His strength and positivity are back. He explained that whatever happened, has happened. If he thinks too much about the past pain it will bring negative energy, which doesn't help. He thanked me for being his friend and for helping. I thank the OAAA members for helping. I am thankful that I was in a position to not only help, but to ask for help from the right people.