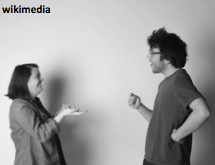 Why do we always ask people, "What do you do for work?" when we meet them? Not only does this question set us up for immediate socio-economic comparison, it also implicitly assumes people's passions and self-definition lie most squarely in their work. But as musical artists from Elton John to Jenny Lewis have accurately sung, "You are what you love," not who chooses to hire you.

When I meet people now, I no longer ask them "What do you do?" Instead, I ask them about what they love. Usually this comes out a little less direct and I ask them, "What's something you really like right now, like a TV show, song, book, food, or hobby?" This one change has made conversations immediately livelier, deeper, and less awkward.

I discovered this question when I started working as a consumer psychologist. I begun asking people more about what they liked to consume. I did not anticipate how much people would enjoy answering it and how immediately I would bond with them.

In the first few times I changed to this question, an environmental engineer told me about his passion for British culture and we bonded over our travels in England; and a lab manager told me about her passion for the band Weezer. From her, I learned so much about the mythology of a band and her through the process. At the end of the conversation, I said, "Thanks for telling me so much," to which she just smiled and replied, "No, thank you. I've been waiting for someone to ask me about Weezer."

People love talking about the things they love. It's probably half of the reason the Internet exists. Star Wars fans and sports fans, however different from each other, both cannot talk enough about their fandoms, so when they talk about these fandoms they are passionate and eloquent.

However, the conversation is not only more enjoyable and eloquent, it is also more immediately personal. Philosophers and psychologists often ponder the question, "Who are we?" Consumer researchers have found that the answer to this question is very much reflected and expressed through what we consume. As Elton John reminds us, "You are what you love" and we all have a TV show, hobby, or band a part of what consumer researchers call the "the extended self" that we can express ourselves through.

It's hard to ask strangers, "Tell me about yourself," and expect a non-awkward and eloquent response. But you can ask them, "Tell me about something you like," and get more or less the answer you're looking for.

Of course, it is possible that people will answer the question with things you don't know anything about. However, this is not usually a problem. This is because people tend to follow conversation norms, and one big conversational norm is to talk about stuff other people know about. So, if a stranger really likes both a well-known musical group and some obscure band no one has ever heard of, the stranger is more likely to mention the former. Second, even if they mention something you've never heard of, all you need to do is ask them to explain more about the selection.

Is this a fool-proof social strategy? Like anything, the answer is no. Every now and again, someone will not want to share or someone will think the question is odd and would prefer to just chat about the weather. But that's a tradeoff anyone should be willing to make for the general benefit this question has on conversations.

This is not to say that asking people the "What do you do?" question cannot be a great conversation starter. If the person has an exciting, personal, and easy to understand job or is just generally enthusiastic, it's a great question. Yet, most of the time, the question receives a dry, awkward, and self-conscious response. However, most people has an easy to communicate passion that's not their work. Whether it's a TV show, a sport, a newborn child, or a hobby, if you can invite them to talk about it you'll be doing them and your conversation a big favor.