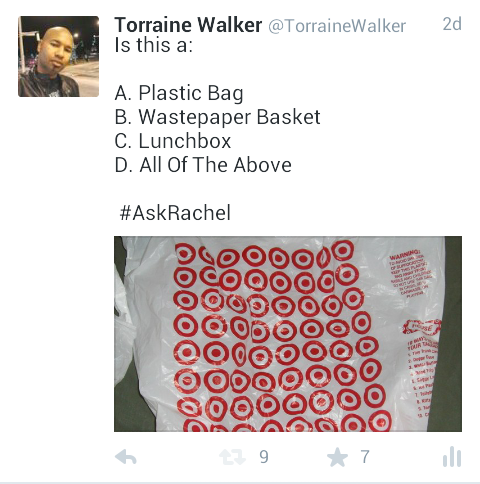 There isn't much that I can say about the Rachel Dolezal situation that hasn't already been said. Some people are upset that she masqueraded as a Black woman and profited financially and socially from that; some people are flattered that a white woman so immersed herself and identified with the culture that she lost herself, while other people think she needs therapy. Quite a few people are amused and confused by it all and I admit that I was too when I first heard about it. My own feelings about Rachel creating a new but false life for herself as a Black woman is that it's her personal issue to deal with, but when it comes to her exploiting that persona for her own enrichment and publicity at the expense of the social progress of Black people, then she needs to answer for that.

However, one thing to come out of all of this that I find amazing and beautiful is the Twitter hashtag #AskRachel, which started as a sarcastic way to mock and test Rachel's perceived lack of Black bonafides and morphed into a sort of digital family reunion, an electronic walk down memory lane for Black people nationwide. Pop quizzes appeared asking Rachel Dolezal to complete song lyrics that every African American over the age of 30 knows without thinking; to supply the correct story and plotlines from Good Times and Martin episodes and seminal black movies; it's become a clearinghouse of the shared experiences and cultural traits of African Americans, things like your grandmother mixing chicken, fish and pork grease into a glass jar on the stove, how to hook up a $5,000 sound system in a $700 1987 Cutlass Supreme, and using shopping bags as lunch boxes and wastepaper baskets until they fall apart.

Reading through all the questions was like flipping through a photo album full of faded pictures and concert ticket stubs that you hadn't looked at in 20 years but instantly transport you back in time. From Blues to Rap, from soul food to personal style, making something out of nothing is what Black people in America have done since the day we arrived here, at first to survive, and then to thrive. It's been wonderful to see that the resourcefulness of our aunts and uncles, and our mothers and grandmothers is larger than just one family in one individual household. This is how cultures are created, and Black culture has always been welcoming and inclusive, so long as you keep it real. It's why white artists like Teena Marie, Hall & Oates, and Paul Wall have dedicated, diehard Black fanbases.

The social, legal and personal ramifications of Rachel Dolezal's self-created fiction remain to be seen, but whatever her motivation is, that fiction came from the desire to be part of a very real, very vibrant and ever-evolving Black culture and in the end, helping to remind Black people that their culture is so rich may be the one good thing that comes out of the whole situation.