These are hard times for the American asparagus farmer.

A casual supermarket shopper, even one who loves asparagus, may not realize this is so. Fresh asparagus is now available in most U.S. supermarkets all year long. And sales of asparagus have steadily climbed over the past couple of decades as consumers have embraced healthier diets. But the odds have never been lower that the asparagus at your local grocery store was indeed grown domestically. 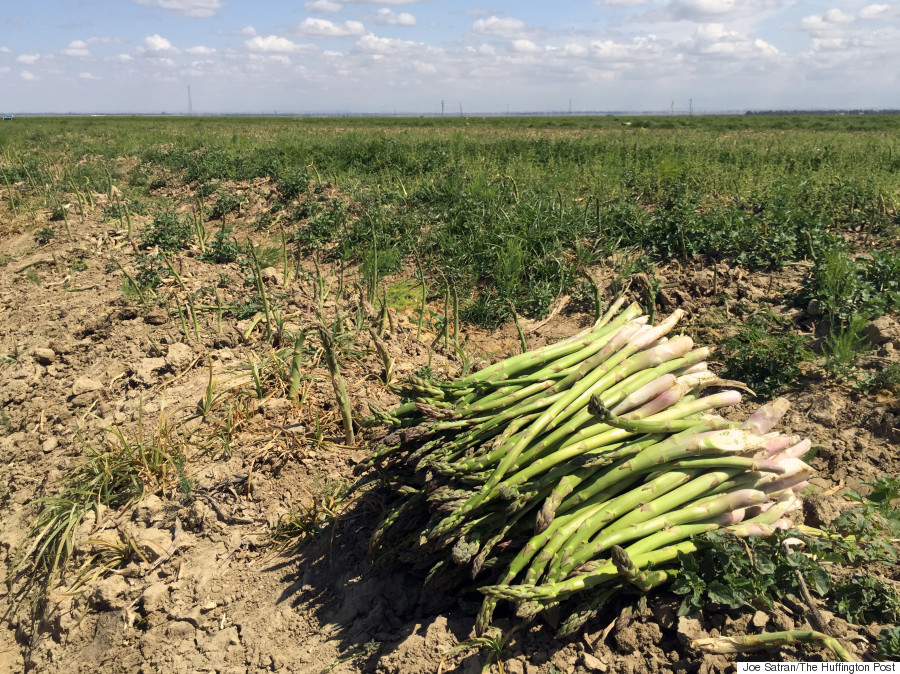 Why? In the early '90s, two trade agreements -- the North American Free Trade Agreement and the Andean Trade Preference Act -- eliminated protective tariffs on asparagus imported from much of Latin America, unleashing a flood of cheap asparagus on the U.S. market. More recently, the cataclysmic drought in California, the country's traditional center of asparagus farming, has caused the price of water to skyrocket, rendering asparagus unprofitable for all but the most efficient farms.

The declines in California have been even steeper. Just 11,500 acres of California farmland were planted with asparagus in 2014 -- down from a high of 40,900 acres in 2000. Most of those acres are located in the vicinity of Stockton, California, east of San Francisco at the confluence of the San Joaquin and Sacramento rivers. But another 240 acres can be found a couple hundred miles down Interstate 5, at the southern edge of the San Joaquin Valley in Bakersfield, California, on property belonging to a farmer named Michael Andrews. 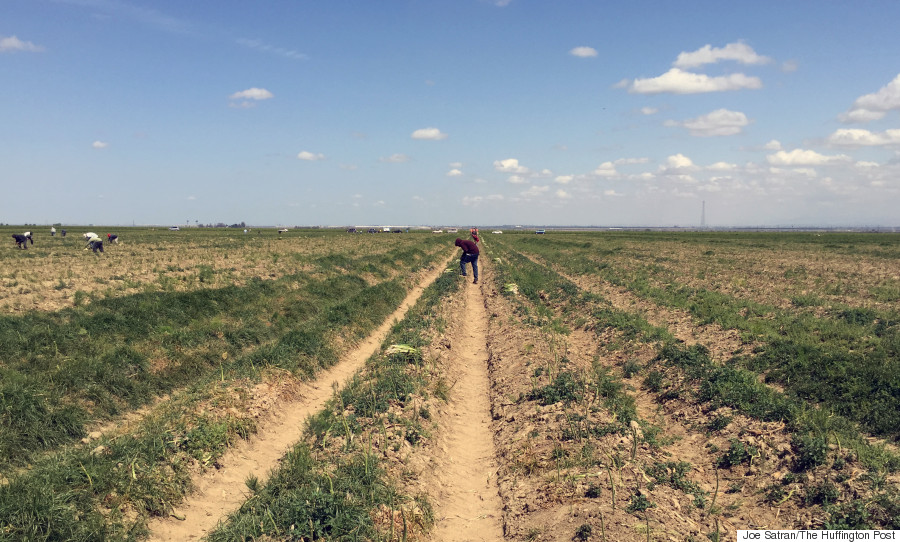 His three-eighths of a square mile represents the last major asparagus farm in the southern half of the state. Andrews bought it in 2002, at an auction of his deceased father's estate. He grows asparagus in the southeast corner of AndrewsAg, his 1500-acre farm. The rest of the land is planted with carrots, onions, lemons, cantaloupe and honeydew melons.

But for the 100-day duration of the asparagus season, between mid-February and the end of May, the overwhelming majority of the activity on the farm is related to asparagus. It is, you see, a uniquely labor-intensive crop to grow. According to Cherie Watte, executive director of the California Asparagus Commission, 75 percent of the production cost of asparagus derives from labor.

Andrews believes that it's the onerousness of farming asparagus, even more than the drought and the crop's macroeconomic headwinds, that has pushed California farmers away from it.

"It just takes so much work," he told The Huffington Post. "We have 200 people working 14-hour days, seven days a week, for the whole time it's growing. If you're farming almonds, you just need one person to tend the orchard for most of the season, and then you have Blue Diamond, or whatever company is marketing your almonds, come and harvest them for you and take them away." 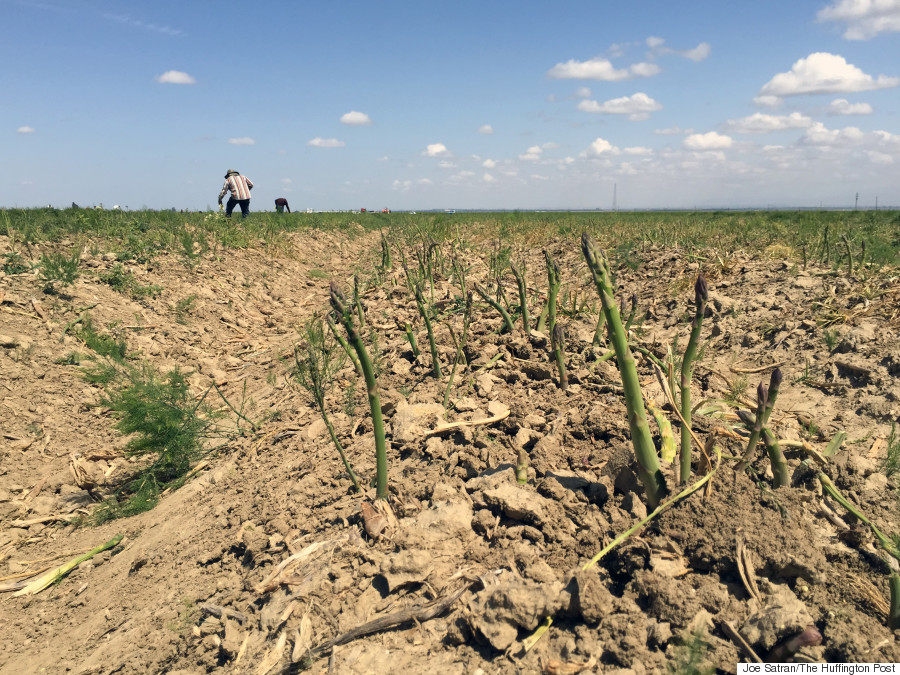 This difficulty is inherent in the biology of the asparagus plant. Most vegetables -- lettuce, broccoli, celery -- are planted, harvested and tilled every season. But asparagus plants survive for 15 or even 20 years. For about nine months of the year, the asparagus plants lie dormant; their stems grow to several feet in height and sprout long leaves that look like fennel fronds. During this phase, the plants produce carbohydrates and proteins and store them underground, in their roots and in a grouping of rhizomes known as their "crown." 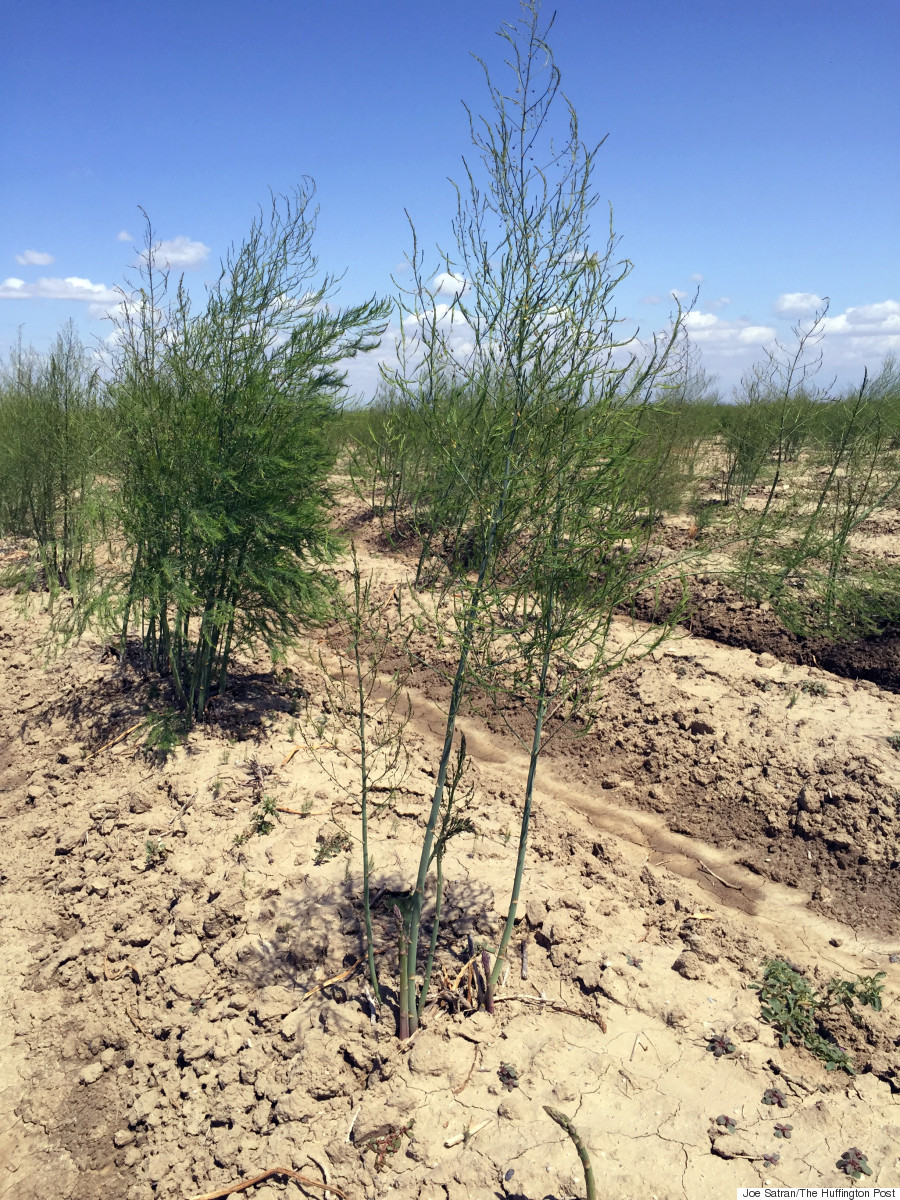 In the spring, asparagus farmers cut down the tall asparagus ferns. The crown and roots of the plant respond by drawing on their stores of nutrients to send new stems up from the earth. Left untended, these new stems would stretch into tall fronds like their predecessors -- but asparagus farmers cut them out of the ground when they're about nine inches long, before the flower at their tip reaches maturity. These young stems and flowers are the asparagus spears you know and love.

What makes asparagus an unusually labor-intensive crop is that a mature plant with a sufficient cache of nutrients will sprout multiple asparagus spears every single day. They grow to their full length in just 24 hours. And if a spear remains uncut for much longer than that, it will continue to grow into an inedible fern. This means that an asparagus farmer must harvest his or her entire plot of asparagus every day of the season. And because the spears rise from the earth in different places every day and are relatively fragile, each one has to be cut from the ground individually, by hand. 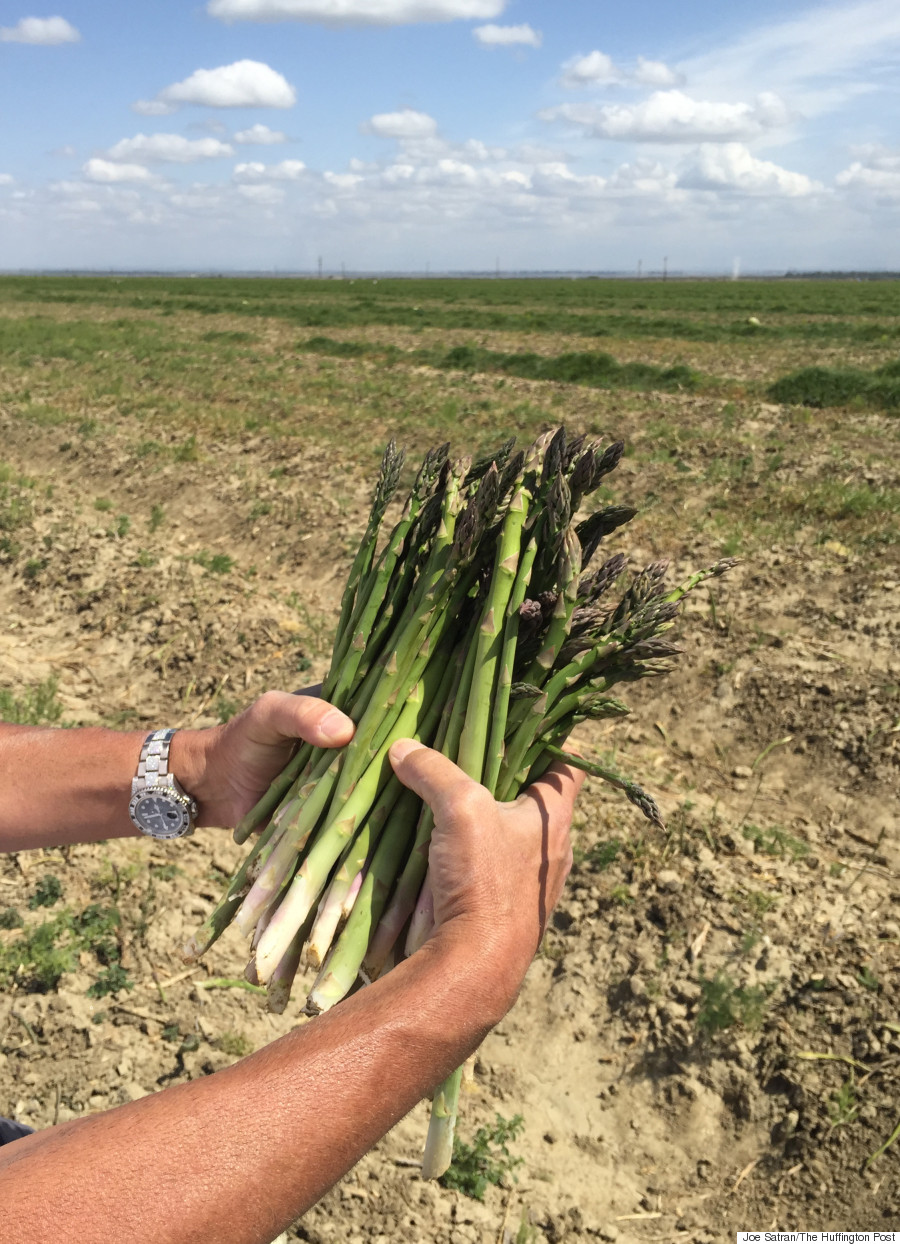 The work doesn't end in the field. Once the spears have come out of the ground, Andrews' employees cart them into a packing shed, cut them down to a uniform length, sort them by diameter and group them into appropriately-sized bunches. A mechanical buzz saw takes care of the cutting, but the sorting, like the harvesting, must be done by hand. The sorting is crucial because AndrewsAg ships asparagus all over the world, and different customers favor different sizes. Swiss consumers tend to request jumbo-sized asparagus, the thickest kind; the Japanese like extra-large and large asparagus, the second and third-thickest types; and Americans generally prefer the thin remainder. 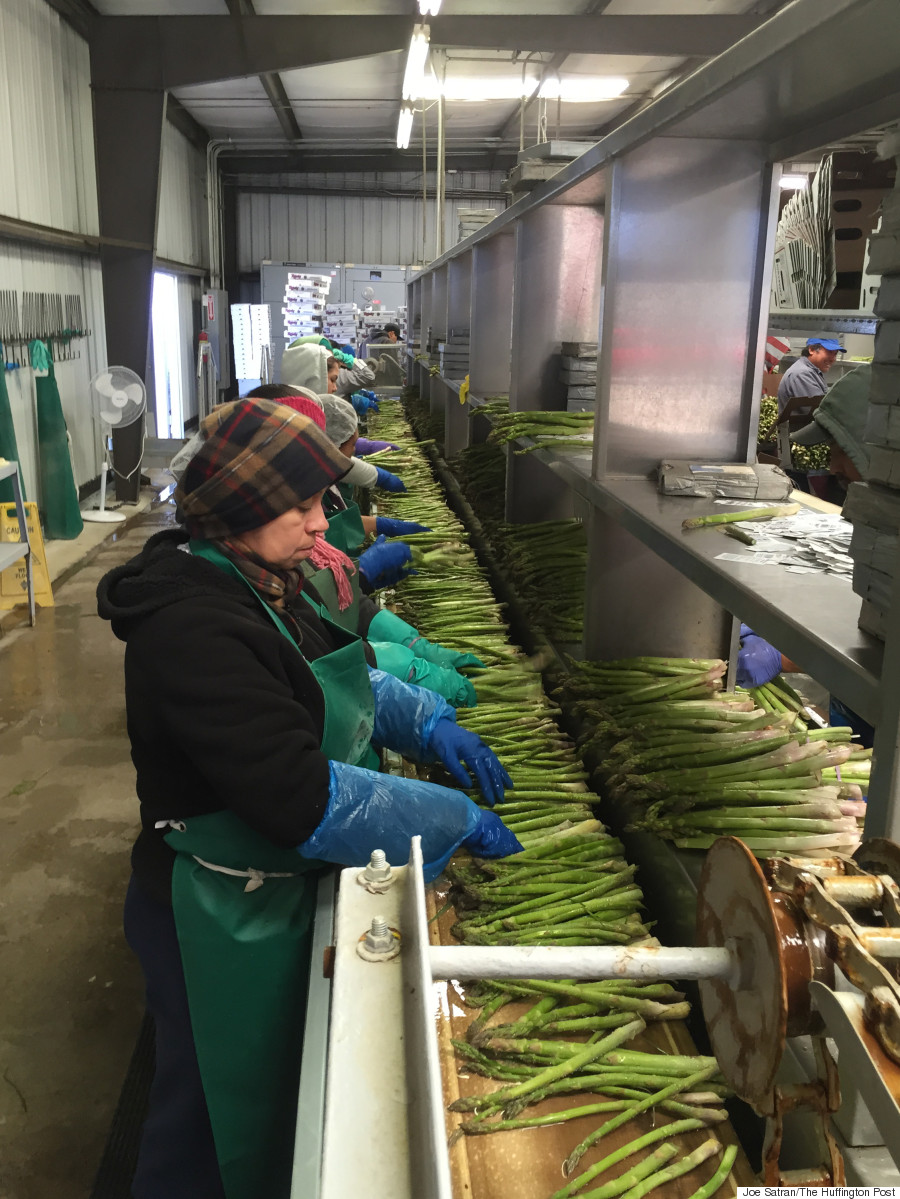 Andrews' employees place the sorted and bunched asparagus into boxes of various sizes, where they are again cut to the same length to ensure consistency. (The woody trimmings from the asparagus are trucked away and fed to dairy cows.) 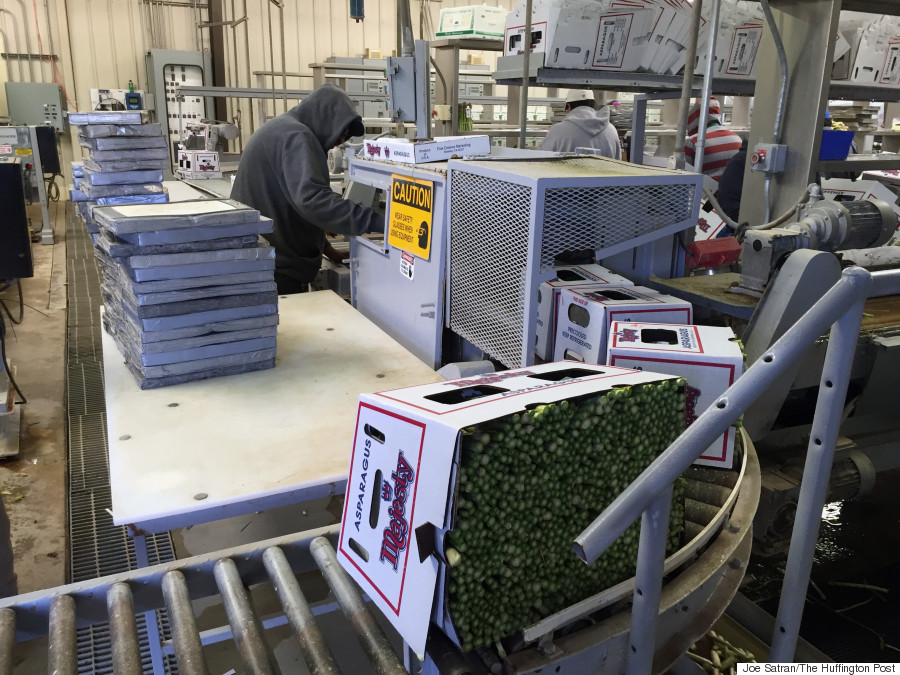 The boxes are then loaded into a hydrocooler, which bathes them for five minutes in cold, chlorinated water containing food-grade citric acid. This is done to kill any pathogens the asparagus may have picked up in the field or during handling.

"The hydrocooler makes them completely safe to eat even raw," Andrews told HuffPost. "Even though most people tend to cook asparagus, we want to eliminate any risk of foodborne illness. We take food safety very seriously." 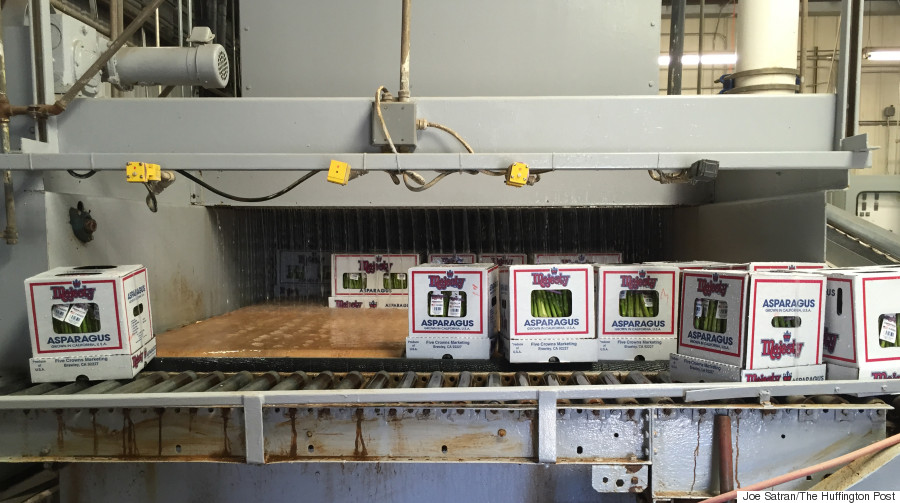 Finally, a conveyor belt moves the washed boxes of asparagus into a cooler, where they're stacked and prepared for shipment by truck. 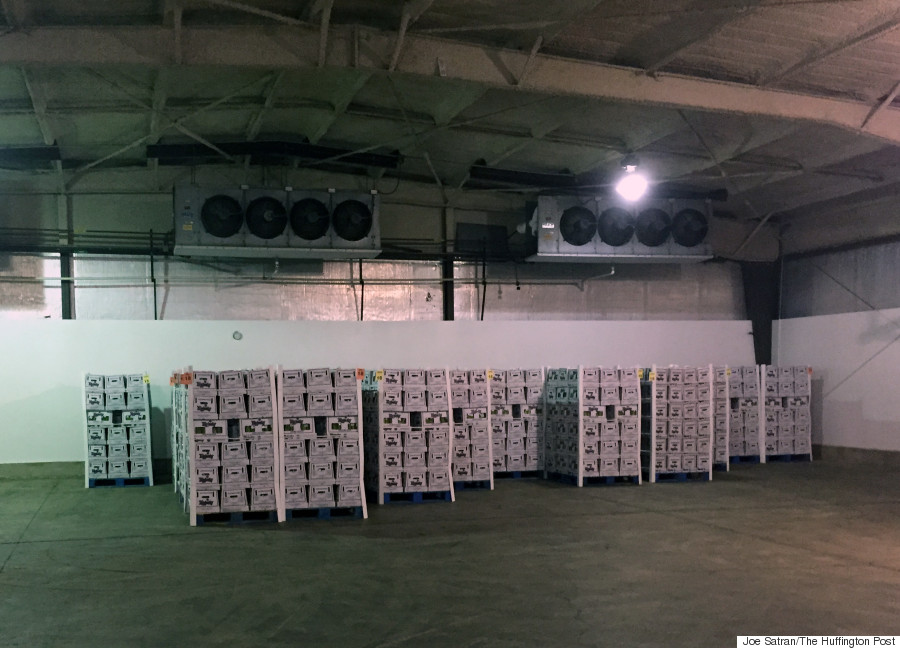 Andrews, who declined to be photographed for this article, proudly noted that the entire process, from field to warehouse, can be completed in as little as one hour. And because AndrewsAg is located just an hour and a half north of Los Angeles, customers can eat his asparagus the very day it comes out of the ground. Freshness is paramount when it comes to asparagus quality, so this allows Andrews and other California farmers to market their asparagus as a more premium product than asparagus from Mexico or Peru -- and thus command higher prices. But Andrews pointed out that his operation is only able to move so quickly because he has access to a reliable pool of skilled labor -- many of the same workers return to his farm year after year -- and a finely tuned set of expensive machinery.

"If you don't have people who know how to harvest the asparagus, and you don't own your own packing equipment and space, it's just not economical, because you end up having to pay other companies to come in and do the work for you," he said. "At every stage, they lop some of your profit off."

Andrews is also able to economize on water. Asparagus plants require between 24 and 30 inches of water every year. According to Andrews, this much water would cost him between $2,000 and $2,500 per acre on the open market, given how much the drought has boosted prices. But Andrews has a mechanical well that pumps groundwater from deep beneath his farm. It's a little salty, he explained, but adding a bit of sulfuric acid makes it suitable for asparagus.

That doesn't mean that Andrews has been unaffected by the drought. Many of the other crops he grows require water with lower salinity than his well can provide, and for those crops he has to draw from the state's irrigation system. Last season, his allocation of state irrigation water was so small that he had to let half his farm go fallow for the year.

Moreover, he's all too aware that groundwater is not an inexhaustible resource. His farm is surrounded by countless groves of almond trees, which are notoriously water-intensive. Many Bakersfield-area almond growers -- whom Andrews refers to as "water abusers" rather than "water users" -- rely on wells for irrigation as well, and so draw on virtually the same source as Andrews. Though Gov. Jerry Brown (D) signed a landmark set of groundwater regulations in September that will place limits on farmers' use of groundwater wells, they won't start to take effect until 2020, which Andrews worries could be too late to prevent some wells from running dry.

"I'm a speculator in commodities. I have been almost my whole life. And I've never been scared until now," Andrews said.

Watte, asked about the impact of the drought, expressed many of the same concerns as Andrews.

"There are growers in the central valley that did not replant asparagus because they were not assured a reliable source of water," she said. "Asparagus is a perennial, so if you don't have a guaranteed source of water, you're not going to plant it."

"Asparagus isn't a huge water user, so I'm not sure the cost of water is an overriding concern at this point," she continued. "But the availability and the guarantee of water is a larger overshadowing factor when it comes to asparagus."

Andrews, for his part, has no plans to give up asparagus farming any time soon. A large portion of his asparagus acreage will reach the end of its life cycle in 2016, and he plans to replace it with a new planting in the spring of 2017, meaning he will be committed to asparagus through 2032.

"I can only control the things I can control," he said. "Will we be in an ice age in 10 years? Will we be underwater in five? I don't know. But I can't control that. All I can do is be conservative and flexible to adapt to what comes next."