Every year, Stewart and I open our home to the speakers who appear at the Aspen Ideas Festival, an event thrown by the Aspen Institute as a forum for the world's thought leaders to speak on global issues. At our dinner, I always give a little speech outlining what I have learned from the sessions I attended.

Welcome to our 6th Annual Speakers Dinner for the Aspen Ideas Festival.

Each year, Stewart and I host the speakers to our great joy, and to paraphrase Greg Mortenson, our "Three Cups of Tea" runneth over.

I rejoiced when Greg related how he convinced the mullahs in a remote Pakistani village to allow him to build a school for girls by reminding the elder that the dowry of a bride with no education is worth just one goat, but a bride who had completed high school could be worth as much as 40 goats. And Stewart lovingly whispered to me that I was worth at least 50 goats. I'm sure I will be worth many more after this year's Ideas Festival.

Each year, I marvel at the changes in our world, and the many ideas discussed to solve each new challenge. I so longed for the way we were that I invited our friend Barbra Streisand to attend this year's Festival.

As the oil in the Gulf threatens to spreads its dreadful tentacles to the far reaches of the eastern seaboard, the national debt threatens to absorb 20% of the taxes we pay, Arianna Huffington tells us that the middle class is an endangered species, our largely ineffective stimulus limps along, galloping unemployment and a nearly broken education system prevail - now, I ask you all, why so glum?

It was in 2005 that my friend Reverend Rick Warren warned that those of us who do not accept Jesus as our savior are going to hell. It seems that most of the speakers at our festival this year are finally united in a common thought: We're all going to hell. So there will be plenty of fine company.

And speaking of hell, it is so nice to witness the harmony among political parties at this conclave -- even if it is the demise of civilization as we know it that has caused it. Now that 40% of our citizens call themselves independent, do you think political parties may go the way of Glenn Beck's sanity?

That Narcissus of negativity, Niall Ferguson, likened our collapse to the fall of the Roman Empire, warning that it will be much quicker. Everyone better learn how to eat with chopsticks -- and fast. 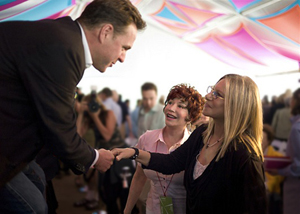 Tom Friedman said that in 2008 and 2009, when Mother Nature and markets hit the wall, it was our warning heart attack. Take a baby aspirin and call him in the morning.

But it wasn't all that grim. There were wonderful revelations: Did you know that the elegant David Bradley was really a Russian spy? I am sure we would get a lot in a swap for David, but can I be your Mata Hari?

The "marriage" of Ted Olsen and David Boies is downright heartwarming as they work hand-in-hand to defeat those opposed to gay marriage.

With all due respect to our Supreme Court justices past and present, Jeffrey Rosen told us the future of free speech will be determined not by the President or the Supreme Court, but by lawyers and Google. I'm not exactly sure how that works, but my attorney told me to Google it.

I know that technology is going to save us. Jeffrey Katzenberg related how he put two 4-year-olds in a room with two iPads with four apps (one on coloring, one sing-along and so forth), and within 10 minutes they had figured it out and were having a great time. My husband, who has been technologically impaired since the dawn of our new age, got an iPad for Father's Day, and I'm proud to say that he is now as proficient as a... 4-year-old.

Mickey McManus tells us that in twenty years, you won't be able to trace HTTPs from today, so if you think your data is on the web forever, you're wrong. I can't tell you how distressing it is to know that Ann Coulter's opinions may be lost to future generations.

Juan Enriquez thrilled us with the news that they can now make a biodegradable plastic by programming bacteria. (I can't wait to put that in an ad for FIJI Water.) He went on to reveal that there hasn't been one person who has died from eating a genetically modified food. I guess he doesn't mind about growing a third nostril?

Laurene Powell said that IQ and talent are distributed across the population evenly, but opportunity is not. If we can find a way to bridge the great divide in our country, I believe we have hope. Say, that might make a good political slogan!

Through her research, Mimi Ito says the youth of America think differently from the rest of us who were born before 1995. They have flexibility, creativity and understand teamwork, even if they do think Justin Bieber's haircut is rad. This technological age is theirs, and they shall seize the future. We just have to keep it all going for the next 20 years until they take over.

But it was my hero, David Brooks -- who, by the way, makes me cry every time I hear him speak -- who gave me the most inspiration for our future. David related a story about a young Mexican-Chinese girl who grew up in a very troubled household, yet managed to create a great life for herself because of her innate mental disposition. It is all about resiliency, isn't it? And above all, America is a resilient country. After all, most of us survived a whole season of Jersey Shore.

"The true challenge of our times is to stoke the creative genius within each and every one of us," said Richard Florida, and Sir Ken Robinson explained that finding our true passion in life is the key to success. And Stewart and I are passionate about having you all here this evening.

David Brooks also told us that we eat less when we're alone and more when we're in a crowd -- that is why we made so much food for you tonight. So eat up, and have a good time. Thank you all for being here.