BEIRUT, Nov 29 (Reuters) - Syria and its allies aim to drive rebels from Aleppo before Donald Trump takes office as U.S. President, a senior official in the pro-Damascus military alliance said, as pro-government forces surged to their biggest victories in the city for years.

Rebels face one of their gravest moments of the war after pro-government forces routed fighters over the past few days from more than a third of the territory they controlled in the city. Thousands of civilians have fled for safety.

The pro-government official, who declined to be identified in order to speak freely, nevertheless indicated that the next phase of the campaign could be more difficult as the army and its allies seek to capture more densely populated areas.

Rebel fighters fought fiercely to stop government forces advancing deeper into the opposition-held enclave on Tuesday, confronting pro-Assad militias who sought to move into the area from the southeast, a rebel official said.

The attack on eastern Aleppo threatens to snuff out the most important urban center of the revolt against President Bashar al-Assad, who has been firmly on the offensive for more than a year thanks to Russian and Iranian military support.

Capturing rebel-held eastern Aleppo would be the biggest victory to date for Assad in the conflict that has killed hundreds of thousands of people since it arose out of protests against his rule nearly six years ago.

As Russia and Iran have stuck steadfastly by Assad, the rebels say their foreign backers including the United States have left them to their fate in their besieged enclave of eastern Aleppo, Syria’s biggest city before the civil war.

Government forces backed by Shi’ite militias from Iran, Lebanon and Iraq punched into the rebel-held area from the northeast last week. The senior, pro-Assad official said the rebel lines had collapsed more quickly than expected.

“The Russians want to complete the operation before Trump takes power,” said the official, repeating a previous timetable which pro-Damascus sources had said was drawn up to mitigate the risks of any shift in U.S. policy towards the war in Syria.

The Russian Defense Ministry did not immediately respond when asked whether it had drawn up such a timeline.

Trump, who takes office on Jan. 20, has indicated that he may abandon support for Syrian rebels who have received military aid from states including the United States, Turkey, Saudi Arabia and Qatar, and could even cooperate with Russia against Islamic State in Syria.

The United States has offered aid including military support to some rebel groups under President Barack Obama, though the rebels have always said this backing has fallen well short of what they need against better armed government forces.

THE WEST “CAN’T DO ANYTHING”

The rebel official said the outgoing U.S. administration was paying little attention to Syria. Assad and his allies were “trying to exploit the current circumstances, unfortunately, and the Western states can’t do anything,” he said.

France, another backer of the opposition, called for an immediate U.N. Security Council meeting to discuss Aleppo.

“More than ever before, we need to urgently put in place means to end the hostilities and to allow humanitarian aid to get through unhindered,” French Foreign Minister Jean-Marc Ayrault said in a statement.

Russia has consistently blocked attempts by Western states to take action in the Security Council against Damascus.

Accounts from eastern Aleppo, where the United Nations says at least 250,000 civilians are trapped with no access to the outside world, point to a dire humanitarian situation. People have been forced to scavenge in the garbage for food as aid supplies have run out, and all the hospitals in eastern Aleppo have been repeatedly bombed.

The civil defense rescue service that operates in eastern Aleppo said on Monday it had nearly run out fuel to power the equipment it has been using to pull people from the rubble of bombed-out buildings.

Pummeled by air strikes, artillery and ground attacks, the rebels were forced on Monday to withdraw to more defensible lines along a highway that runs through Aleppo, hoping that it would be harder for the government side to make further gains.

The rebel official with one of the main Aleppo rebel groups said the opposition fighters had managed to stabilize new frontlines, but were fighting to stop pro-government militias that sought to advance from the south.

“There is no progress but the bombardment and battles remain fierce, particularly in Aziza” in southeastern Aleppo, said the official with the Jabha Shamiya rebel group, which fights under the Free Syrian Army banner. “Yesterday evening there was a big mobilization by Iranian militias in Aziza,” the official added.

The government and its allies gradually besieged the rebel-held sector of Aleppo this year before abandoning a ceasefire to launch a fierce assault in September.

The latest fighting has forced thousands to flee. Some have crossed the frontline to government-held areas, others have sought refuge in a Kurdish-controlled part of the city, and many more have fled deeper into the remaining rebel-held area.

Air strikes on Bab al-Nairab, a district in the rebel-held area, killed at least 10 people and left dozens more wounded or missing, the Syrian Observatory for Human Rights and the civil defense rescue service said. The Syrian military could not be reached for comment.

The civil defense said government planes struck as people were trying to flee the neighborhood on foot, killing 25.

The United Nations humanitarian chief and relief coordinator said up to 16,000 people had been displaced from eastern Aleppo.

A U.N. spokesman said that according to the Syrian Arab Red Crescent 10,000 people had moved into government-held western Aleppo, and 4,000-6,000 had moved into the Kurdish-held Sheikh Maqsoud district. Rebels say thousands more have moved deeper into the areas still held by the opposition.

The U.N. envoy for Syria, Staffan de Mistura, said he could not say how long eastern Aleppowould hold out.

“Clearly, I cannot deny - this is a military acceleration and I can’t tell you how long eastern Aleppowill last,” he told the European Parliament.

Russia said that the army’s breakthrough in Aleppo had dramatically altered the situation on the ground, allowing more than 80,000 civilians to access humanitarian aid after years of what it described as being used by militants as human shields.

“During the last 24 hours, thanks to very well-prepared and careful actions, Syrian soldiers were able to radically change the situation,” Major-General Igor Konashenkov, a defense ministry spokesman, said in a statement.

“Practically half of the territory occupied by rebels in recent years in the eastern part of Aleppohas been completely liberated.”

A medic in eastern Aleppo who gave his name as Abu al-Abbas said however there was “intense fear of collective annihilation.”

“This week I’ve changed locations three times,” he added, speaking on Monday using a social networking site. “In the shelter, we had dead people who we couldn’t take out because the bombardment was so intense,” he said.

PHOTO GALLERY
Aleppo Before The War 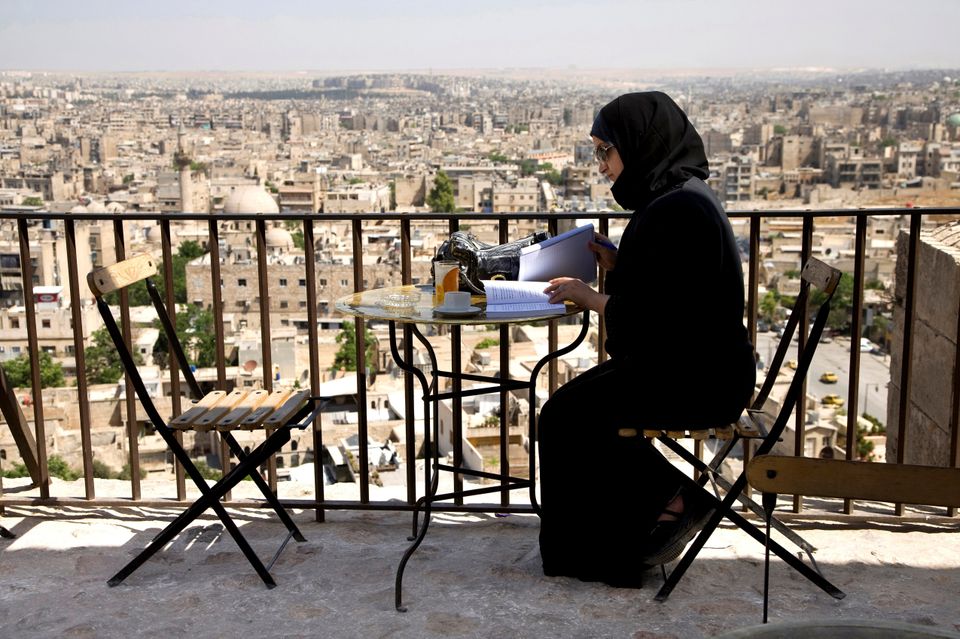