HOMS, Syria May 8 (Reuters) - Syrian forces took full control on Thursday over Homs, a city once associated with scenes of joyous pro-democracy crowds but now famed for images of ruin that epitomize the brutality of Syria's civil war.

After holding the Old City of Homs for nearly two years, around 1,200 rebel fighters and trapped civilians boarded buses which took them out of the "capital of the revolution" in convoys on Wednesday and Thursday, activists said.

They were driven to rebel-held territory outside the city under a deal agreed between the insurgents and forces loyal to President Bashar al-Assad.

Homs provincial governor Talal Barazi told Reuters earlier on Thursday that Homs would be "declared a secure city" and reconstruction would commence after the evacuation.

Although the area had been cleared of insurgents, the army is not expected to move into the Old City until Friday when it will be checked for explosives.

Rebels smiled to cameras as they left, but the fall of Syria's third largest city to government forces is a major blow to the opposition and a boost for Assad weeks before his likely re-election.

When thousands of Syrians took to the streets of Homs in 2011, it electrified the nation and anti-Assad demonstrations erupted in every major city. Government forces cracked down on the religiously mixed city with batons and live ammunition.

Mortar bombs were fired on protests in Homs and the revolution became armed. Rebel groups spread through the city as civilians fled or cowered in the basements of battered buildings. A year ago, government forces laid siege to the Old City and residents said they starved.

On Thursday, the city was close to silent with no sound of gunfire or explosions. Many buildings at the entrance to the Old City district lay in ruins, destroyed by three years of fighting.

Lebanon's al-Manar television aired footage from Homs of a line of rebel fighters, some carrying guns and wearing scarves around their faces, walking to green buses, passing government troops.

At the same time as rebels were evacuated from Homs, dozens of captives held by rebels in the northern provinces of Aleppo and Latakia were freed as part of the same deal.

Governor Barazi told state media that 70 people abducted by rebels were released, including five children and 17 women, and state television said more people were later released from Latakia on Thursday.

The Homs evacuation comes after months of gains by the army, backed by its Lebanese ally Hezbollah, along a strategic corridor of territory linking the capital Damascus with Homs and on to Assad's Alawite heartland on the Mediterranean.

Assad's forces now control most of the capital, along with the main highway from Damascus to the coast, while rebels control much of the desert in the north and east. Syria's second city, Aleppo in the northwest, is contested.

Many areas in Homs province remain in rebel hands, including the stronghold town of Rastan, and Assad will also need to secure rural areas around the capital to take full control of areas the Syrian army has been battling for. Government forces have also lost ground in the south to Islamist brigades.

Assad is widely expected to be the runaway victor in the June 3 presidential vote, which his opponents at home and abroad have dismissed as a charade.

They say no credible election can be held in a country fractured by civil war, with swathes of territory outside government control, 6 million people displaced and another 2.5 million refugees abroad.

More than 150,000 people have died in the conflict. Millions more have fled their homes and fighting regularly kills more than 200 people a day. (Writing by Oliver Holmes; Editing by Alastair Macdonald)

PHOTO GALLERY
Syria War In May 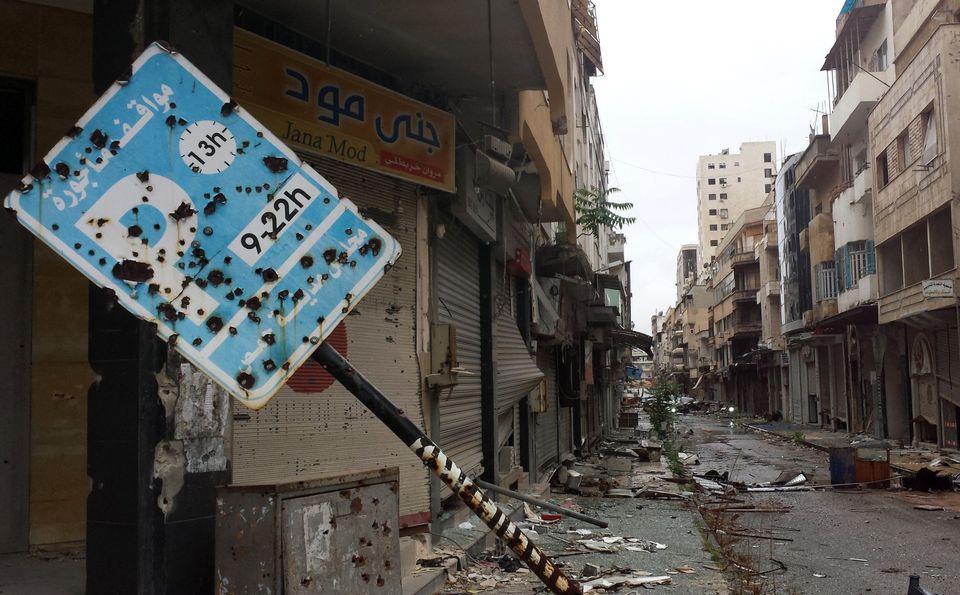 1 / 13
A bullet-riddled parking sign stands amid debris in a deserted street leading into the old city of Homs on May 8, 2014. (YOUSSEF KARWASHAN/AFP/Getty Images)
Getty Images