An extinct species of assassin fly that lived during the age of the dinosaurs has been discovered inside a translucent tomb of amber.

A male and a female of the newfound species, now called Burmapogon bruckschi, were preserved in pieces of Burmese amber from Myanmar's Hukawng Valley. The specimens measure less than an inch (2.5 centimeters) in length and are about 100 million years old, researchers say.

B. bruckschi joins more than 7,500 species of assassin flies that are alive today. The insects get their name from their precise and gruesome way of killing: After a mid-flight ambush, assassin flies stab their prey's exoskeleton and inject digestive juices so that they can suck out the liquefied insides like a milkshake, leaving an empty hull behind. [Photos: Ancient Assassin Flies Trapped in Amber] 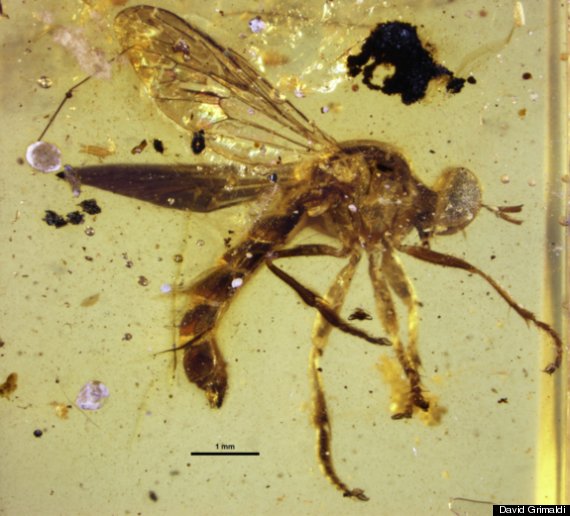 A scientist at the Smithsonian National Museum of Natural History discovered and named a new 100-million-year-old species of assassin fly, Burmapogon bruckschi, after studying the first two specimens ever preserved in Burmese amber.

But apparently, these two tiny predators weren't immune to oozing droplets of resin. Insects can become trapped in amber when they are engulfed in resin flowing from trees. Hardened amber droplets can thus provide rare snapshots of prehistoric life — and some of them are surprisingly rich scenes, like a spider attacking a wasp caught in its web.

Previously, the history of assassin flies had been recorded only in limestone fossils. The amber-encased B. bruckschi specimens provide a rare 3D view of the ancient creatures' bodies.

"The transparency of these amber fossils gives researchers a new window into the ecology of the Cretaceous Period, and sheds light on the evolutionary history of a family of flies that has withstood the test of time for millions of years," Torsten Dikow, a scientist at the Smithsonian National Museum of Natural History who discovered the species, said in a statement. "The fossils of these ancient flies are so well preserved that you can almost imagine them flying around in our world today."

The species, along with another type of ancient assassin fly, Cretagaster raritanensis, was described in yesterday's (April 21) edition of the journal American Museum Novitates. This second creature was only recently identified as a new species; it was originally found in a chunk of amber in New Jersey in 1999.

Copyright 2014 LiveScience, a TechMediaNetwork company. All rights reserved. This material may not be published, broadcast, rewritten or redistributed.
Go To Homepage