Four years ago, an Arizona blogger wrote about the heartbreaking loyalty of her rescued assistance dog Shelby, and the story is still moving thousands of people today. A photo from the original blog post resurfaced on Reddit this morning and received nearly 13,000 upvotes in a matter of hours.

The photo shows the writer, who goes by the blogger name Zipperhead, suffering through a seizure and Shelby pressing herself against her owner to prevent self harm. 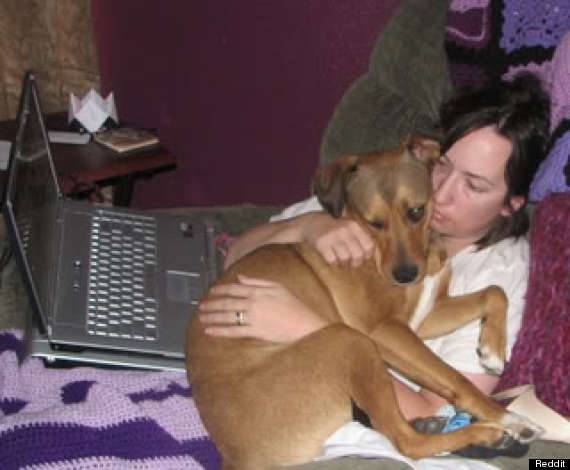 The blogger struggles with debilitating neurological disorders. An inherited connective tissue disorder called Ehlers-Danlos sydrome and the resulting scarring on her brain began to limit mobility for the mother-of-two over the years.

In March 2008, the family found Shelby at the Humane Society. Shelby was a brutally abused 1-year-old Rhodesian Ridgeback, but she struck a chord in the family's hearts and they knew they had to bring her home.

Shelby started out as a mobility-assist dog for her new owner. But when the blogger's condition progressed to daily seizures, Shelby began to sense them even before they came on.

She took on the duty of 24-hour "seizure-alert." According to the Epilepsy Foundation, "seizure dogs" can detect signs of an oncoming seizure. They are trained to alert their owners and some, like Shelby, will engage the the owner to prevent them from harming themselves.

"Shelby normally sprawls across my lap a few minutes before a seizure starts to prevent me from going anywhere, falling, and getting injured," her owner wrote in the original post.

The viral photo displays a particularly severe morning episode during which Shelby remained in her owner's lap for more than an hour until the seizures subsided.

"I don’t think we rescued her, but maybe in a way she rescued us," Zipperhead wrote on the Wellsphere website.