NASA scientists have spotted a mysterious X-shaped debris pattern with trailing streamers of dust that is unlike any image astronomers have seen before.

The behavior is not typical of comets, UCLA investigator David Jewitt explains, and researchers believe something unprecedented has been spotted:

This is quite different from the smooth dust envelopes of normal comets. [...] The filaments are made of dust and gravel, presumably recently thrown out of the nucleus. Some are swept back by radiation pressure from sunlight to create straight dust streaks. Embedded in the filaments are co-moving blobs of dust that likely originated from tiny unseen parent bodies.

Across the vastness of space, chances are slim that scientists would have a camera pointed in the right direction and set to capture images at the moment two random asteroids collide. These conditions, it seems, haven't been met until now.

If what astronomers believe is correct, NASA's Hubble Space Telescope's Wide Field Camera 3 happened to be correctly oriented just as two asteroids slammed into each other 90 million miles away from the Earth.

Scientists are guessing the collision happened at speeds over 11,000 miles per hour, which is what scientists believe the average speed of asteroid collisions are. (see photo below)

It seems that only one asteroid, named P/2010 A2, survived the impact and is seen in the image glowing just outside of the X-debris pattern. It is assumed that the other asteroid disintegrated fully.

Astronomers have long assumed that these types of collisions are common, but they've never been directly recorded until now. The join of the X is thought to mark the location where the impact occurred, while the distinctive X-shape was created by debris being swept into tail formations by the pressure of sunlight.

Scientists have long noted that the asteroid belt of our solar system contains evidence of ancient collisions. They believe that a similar such collision may have produced an asteroid fragment that became the meteorite that struck the Earth 65 million years ago and caused the mass extinction of the dinosaurs. 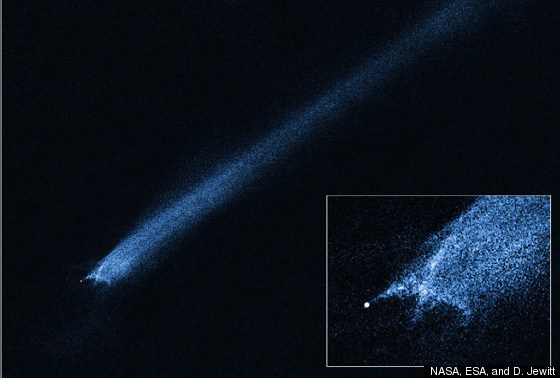