Breathe easy, Earthlings. A 60-foot asteroid is headed our way, but astronomers say it's nothing to worry about.

"While this celestial object does not appear to pose any threat to Earth or satellites," according to NASA, "its close approach creates a unique opportunity for researchers to observe and learn more about asteroids."

Astronomers say 2014 RC is roughly the same size as the space rock that exploded over Chelyabinsk, Russia last year.

While skywatchers won't be able to spot the asteroid with the naked eye, amateur astronomers may be able to catch a glimpse using a small telescope. 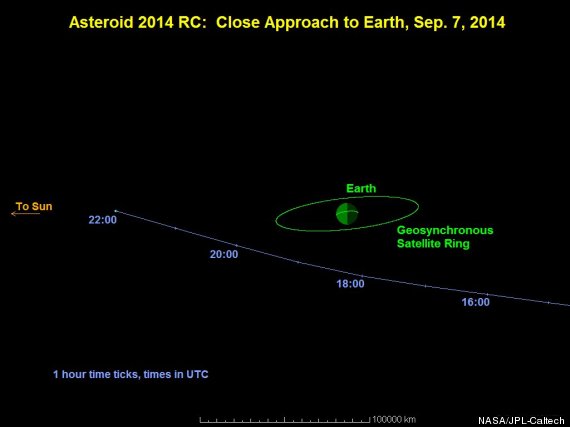 This graphic depicts the passage of asteroid 2014 RC past Earth on September 7, 2014. Times indicated on the graphic are Universal Time.

Asteroid 2014 RC isn't the only near-Earth object (an asteroid or comet that comes within 28 million miles of Earth) out there. As of September 2, 2014, 11,408 asteroids and comets have been detected.

And that's not including the space rocks we haven't yet discovered. NASA estimates that one-third of the larger near-Earth objects and less than one percent of the smaller rocks have been identified.