If you're the sort of person who worries about asteroids, a new map from NASA's Near Earth Object Program is unlikely to offer much reassurance. It shows that during the 20-year period from 1994 to 2013, the Earth's atmosphere was hit by small asteroids resulting in fireballs (bolides) on at least 556 separate occasions--or essentially "all the time," the agency said in a written statement released in conjunction with the map. 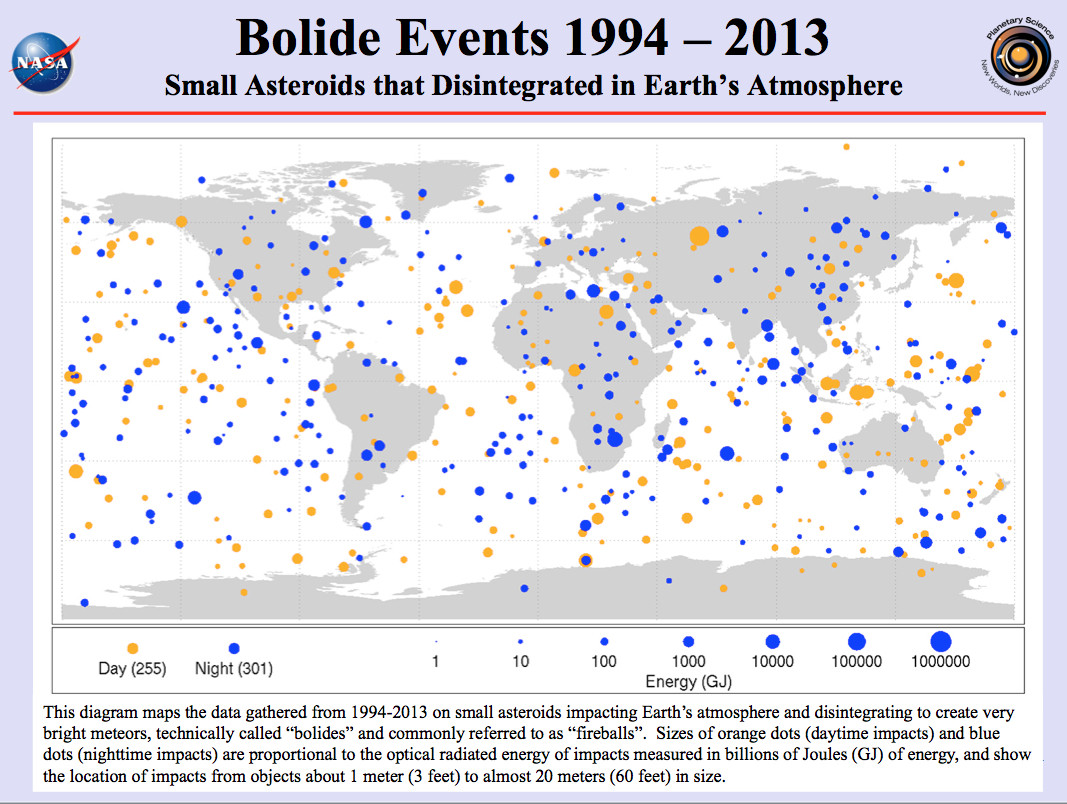 Most of the asteroids that came our way burned up harmlessly before hitting the ground--evidence that the atmosphere "does a great job of protecting Earth from small asteroids," program executive Lindley Johnson said in the statement. The notable exception was the so-called Chelyabinsk meteor event, in which an asteroid measuring 17 to 20 meters in diameter exploded over the Russian city of Chelyabinsk on Feb. 15, 2013.

The Chelyabinsk meteor blew out windows and injured more than 1,000 people. But that event would pale in comparison to the devastation an even bigger asteroid strike could bring.

Just how worried should we be?

"Asteroid impacts are an extremely unlikely event, but a large one can have potentially bad consequences," Dr. Amy Mainzer, principal investigator for NASA's NEOWISE space telescope program and an expert on asteroids, told The Huffington Post in an email. "That means we shouldn't panic, but we shouldn't ignore it either. A sensible approach is to simply go out and find any potential impactors, which is what we are working on. With surveys, we can answer the question of whether there is an object large enough to cause a lot of damage out there with our names on it."

Surveys have found more than 90 percent of all near-Earth asteroids larger than 1 kilometer in diameter, Mainzer said. But only a few percent of the total number of asteroids large enough to get through the atmosphere have been discovered.

"Clearly, there is more to be done, but we are working on it," she said, adding that her team was working on a proposal for a new space telescope called NEOCam that would "significantly expand" NASA's ability to detect potentially dangerous asteroids.

Arizona's Meteor Crater is believed to have formed about 50,000 years ago when a 50-meter asteroid smashed into the ground near what is now the city of Winslow. And the so-called Cretaceous-Paleogene extinction event that killed off the dinosaurs 65 million years ago is believed to have been triggered at least in part by the impact of a 10-kilometer asteroid in what is now the Yucatan peninsula.