Know that space rock that wreaked havoc on the world in the 1998 action movie Armageddon? Well, that might have been fiction--but a new NASA study identifies about 4,700 “potentially hazardous” asteroids near Earth. Deja vu?

The asteroids are on astronomers’ radar because they are headed dangerously close to Earth—within five million miles—and are big enough to pass through our planet’s atmosphere and cause major damage. In the image above, the bright space rocks have diameters of more than about 330 feet (100 meters).

The study of potentially hazardous asteroids is part of NASA’s wide-field infrared survey explorer mission, or WISE for short.

"We've made a good start at finding those objects that truly represent an impact hazard to Earth," Lindley Johnson, program executive for NASA's near-Earth object observation program, said in a written statement. "But we've many more to find, and it will take a concerted effort during the next couple of decades to find all of them that could do serious damage or be a mission destination in the future." 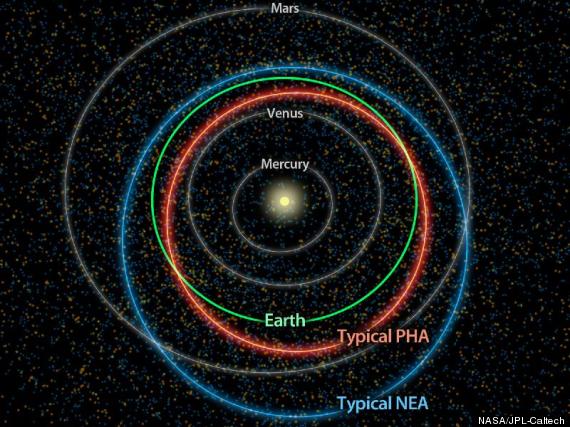 This diagram illustrates the differences between orbits of a typical asteroid near Earth (blue) and a potentially hazardous asteroid (orange).

The research suggests that more perilous asteroids than previously thought are in so-called low-inclination orbits, which means they're more aligned with the plane of Earth’s orbit. Other near-Earth asteroids are farther away.

“Our team was surprised to find the overabundance of low-inclination PHAs [potentially hazardous asteroids]. Because they will tend to make more close approaches to Earth, these targets can provide the best opportunities for the next generation of human and robotic exploration,” Amy Mainzer, NEOWISE principal investigator at NASA's Jet Propulsion Laboratory, said in the written statement.

The WISE spacecraft has catalogued hundreds of millions of objects in our solar system, snapping photos of about 600 near-Earth asteroids, NASA researchers said. Based on previous data from the spacecraft, researchers last year estimated that about 20,500 asteroids larger than 100 meters were orbiting near Earth, but they weren't given the stamp of "potentially hazardous."